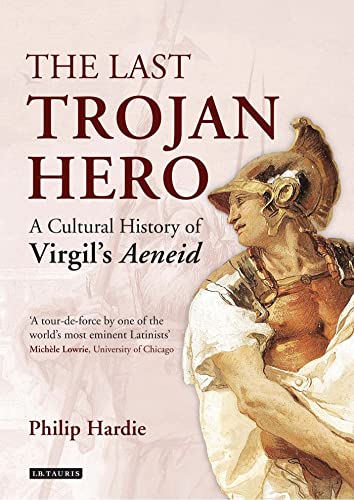 In the heat of the Second World War, T. S. Eliot gave a speech (to the newly formed Virgil Society) stating that the Aeneid was "the classic of all Europe," because Virgil "is at the center of European civilization" in a way shared by no other poet. More than Dante, more than Cervantes, more than the Anglo-Saxon epics forgotten for centuries, more than Malory's Morte D'Arthur or the Grail cycle, more even than the Odyssey or Paradise Lost, the tale of Aeneas and his wandering Trojans has defined the West; as Philip Hardie writes in this magnificent volume, the work of Virgil has been "a central monument in the literary and cultural landscape of Europe and, in more recent centuries, of those territories around the world colonized by Europe." Only Christianity has been a comparable influence on Western culture, and even there the record is muddled, because Christianity came at the back of Latin learning across Europe, a learning itself based on knowledge of Virgil. And at times it seemed the epic would win out even over Christianity.

Hardie, an eminent classicist, senior research fellow at Trinity College Cambridge, and author of several previous books on Virgil, traces the influence of the Aeneid and Virgil's other works through Western culture from their composition during the reign of Augustus through almost the present day. The Last Trojan is an exceptionally accessible example of "reception studies," an academic discipline that looks at how classic works are accepted into cultural memory and become part of a culture's language over time. (In the old days, this approach might simply have been called literature or history, or even "tradition.")

The Aeneid is the supreme exemplar for such studies, since it was received into the cultural and literary canons almost from publication. The epic and Virgil's other poetry, the farming poems called the Georgics and the pastoral Eclogues, were continually reworked and reimagined in the ensuing centuries across almost every European nation as times and cultural shifts allowed or required. "To write a comprehensive literary and cultural history of the reception of Virgil would be little less than to write a literary and cultural history of Western Europe and its former overseas possessions," as Hardie puts it. To provide some order to his material, Hardie divides his book along rough subject lines, such as "Empire and Nation," "Underworlds," "Art and Landscape," and a fascinating chapter on the many versions of Dido, the tragic queen, "La donna è mobile."

The epic, as is well known, covers the travails of Aeneas, his father Anchises and son Ascanius, and his band of Trojans as they flee the city after its destruction by the Greeks. After many adventures, including an idyll in Carthage with its ruler Dido and a visit to the underworld, the Trojans end up in Italy, where Aeneas defeats the natives and ultimately founds the empire destined to rule the world.

The poem fired the European imagination in part because of a happenstance in time. Written in the ten years following the defeat of Antony and Cleopatra in 31 BC, during the period when the Roman Republic was becoming the Roman Empire. A memorable passage in Book VI, spoken by Anchises to Aeneas in the underworld, lays out the prophecy of Rome's dominance: "Romane, memento (hae tibi erunt artes), pacique imponere morem, parcere subiectis et debellare superbos," loosely translated as "Remember, Rome, such are your skills: to impose your way with peace, to spare the downtrodden and defeat the proud." One could see why those around Octavian would warm to such language. The Aeneid therefore became initially a poem of empire, and indeed the genealogy of the main characters is written always with the present in mind. Aeneas, after all, is the ancestor of Octavian (who became Augustus in 27 BC), and Ascanius founds Alba Longa, which becomes Rome under Romulus. This was never a monolithic view, as Hardie notes; Aeneas's abandonment of Dido for his destiny and his, perhaps unjust, slaying of the Italian Turnus at the very end of the narrative give the poem a dramatic tension that has contributed to its influence.

The force of the family connection with Aeneas is so strong that through the medieval and early modern period most royal families had their own "genealogies" trace back to Aeneas or, if they couldn't do that, even by wishful thinking, at least to the image of founding, as Aeneas had founded Rome. Thus, in AD 799—eight centuries, remember, after the Aeneid's composition—a poem commemorating the meeting of Charlemagne and Pope Leo III in Aachen is imbued with Virgilian resonance, with the city being a new Rome. Some years ago, Marie Tanner wrote an excellent book on the Virgilian iconography of the Hapsburgs, titled The Last Descendant of Aeneas. In it, she details how the Hapsburgs, through literature, painting, and royal symbolism, made repeated and explicit connections between the family and the epic hero well into the 19th century. Hardie notes the Aeneid manqué written in 1576 in honor of Rudolf II, and on a more public scale, the entrance of Eleanor of Toledo's entry into Florence in 1539, complete with a triumphal arch reminding the populace of the connection between the Habsburgs and the Augustan reign of peace, "Augustus Caesar Divum Gens Aurea Condit Saecula."

Hardie's book is also an act of extraordinary cultural retrieval. He identifies scores of neglected works—some many volumes in length—written in imitation of Virgil over the centuries. From the 2nd-century church father Lactantius, to the North African Fulgentius in the 6th century, to the Renaissance humanists, everyone needed to interpret, comment on, and engage with the "incomparable" poet in order to be a part of the culture. These works were the common deposit of literary tradition of the West; individually and collectively, they exerted a profound influence in how Europeans understood themselves and the symbolic and rhetorical language they used to express that understanding.

Even Virgil's name becomes absorbed into this wider flow of tradition surrounding him. Surely deliberately, Hardie uses the medieval spelling of Virgil's name, though the poet was born Publius Vergilius Maro. The alternate spelling arose by amalgamation with the virga, a Latin word referring to something like a magic wand, hence a tribute to the magical powers the poet was said to command. The poem itself seemed to absorb the poet's magical powers; thus, over the centuries Europeans employed techniques like the sortes Virgilianae, which was the practice of opening the Aeneid at random to tell a fortune from reading the lines, or the cento, which literally pieces together lines from Virgil to create an entirely new literary document. As early as the 4th century, there are Virgilian centos that recombine fragments of the Aeneid to tell the story of both the Old and New Testaments.

Hardie focuses on the vast literary reception of Virgil's work. But we should not lose sight of the fact that Virgil's influence extended beyond literature into politics and what may be termed "popular" culture, given that for most of the period Hardie discusses most people could not read. The Last Trojan Hero helpfully includes some black-and-white and full-color plates from Titian, Rubens, Tiepolo, and others, to show the visual reach of the epic. Moreover, in his chapter "Parody and Burlesque," Hardie traces a popular tradition of doggerel, satire, and other "lower" literary forms based on Virgil's epic poetry. Although extremely bawdy at times, nevertheless a scatological poem written in iambic pentameter alluding to Latin epic somehow still seems richer than our contemporary analogues, which, among other faults, are trapped in their own self-referential universe.

And then there is Christianity. Hardie devotes a chapter to the love-hate relationship the Church had with Virgil, and how post-Reformation Christendom continued to use him. The most famous connection with Virgil is not in the Aeneid but in the Eclogues. There, in Book IV, Virgil was said to anticipate the coming of the Christ-child, thus making Virgil Christianus naturaliter, endowed with the gift of prophecy. This legend contributed to Virgil's reputation as a sorcerer and wonderworker as well as poet. The motifs of a worldwide, divinely inspired empire had obvious uses for Christian kings and the papacy, and as Hardie shows, the supernatural elements of Virgil, which had gods and demons pushing Aeneas and his adversaries along their allotted paths, found literary echoes in Christian works.

Although Hardie is confident of Virgil's continued presence, the examples he uses of that presence grow unfortunately thinner as we approach the present; Derek Walcott is the outstanding exception to the general literary neglect of Virgil. There are many reasons for the fading of classical imagery and language from contemporary culture, of course, but this book helps explain why a revival of half-remembered Latin in inscriptions (there is one in the World Trade Center Museum, for example) is not enough. The European world, including its colonies, was saturated with Virgil, and through him to an entire civilization. But yet, like so much of classical learning, the old Roman poet is in danger of becoming one of the shades in Book VI of his great work, haunting the underworld and waiting just at the back and edges of our cultural dreams.

Gerald J. Russello is editor of The University Bookman (www.kirkcenter.org).