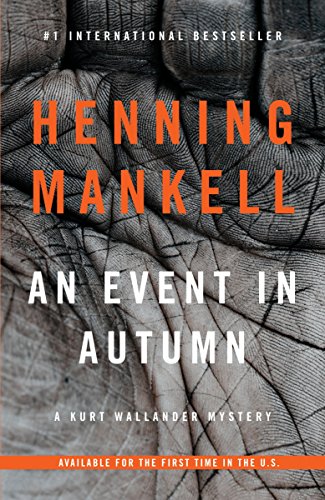 An Event in Autumn

The last volume in Henning Mankell's Kurt Wallander series left readers all over the world—readers in the millions—feeling rather desolate, for a time at least. That book, The Troubled Man, not only brought the series to an end—sufficient cause for brooding on the transitory nature of all human things—but pitilessly documented Wallander's decline into the far depths of dementia. (When I read The Troubled Man, my dear mother—who died in June 2013, at the age of ninety—was herself in that condition.)

An Event in Autumn thus comes as a boon to Wallanderites, though its satisfactions are bittersweet. In an afterword dated 2012, Mankell explains that this short novel was written some years ago for a promotion in the Netherlands: "everybody who bought a crime novel in a certain month would receive a free book." Later the story became the basis for one of the episodes in Kenneth Branagh's Wallander series for the BBC. And now it appears in English translation by Laurie Thompson. All of this is spelled out, in part, to disabuse readers of the hope that maybe, just maybe, somehow, the series will be revived. Here is the last sentence of Mankell's afterword: "There will be no more stories about Kurt Wallander."

OK, OK, we get the message, but we are glad to have this one, which immediately precedes The Troubled Man in the Wallander chronology (hence providing intimations, all too plausible, that the malign worm is already lodged in his brain, though here he is still functioning at a pretty high level). How good it is to follow Wallander at work with Martinson and Nyberg and other colleagues and their boss, Lisa Holgersson! Not even his familiar squabbles with his daughter, Linda—which I have always found tedious—bothered me quite as much as they usually do. I read the novel three times: the first time burning through it, the second time more slowly, savoring, and once more, a few weeks later.

What sets the story in motion is the discovery of the body of a woman, dead for decades, and then the body of a man, killed at the same time. Who were they? As usual in the series, the investigation proceeds in fits and starts, with wrong turns but also with inspired intuitions, the conventions of the police procedural deftly blended with a chronicle of Wallander's thoughts, moods, random observations on the changing state of Sweden, and so on. And, of course, notes on the weather:

The day after Wallander's first visit to the real estate agent's, there was a thin white layer of snow over the town and the brown fields.
Christmas that year was cold. Icy winds blew over Skane from the Baltic.
Winter had arrived early.

Elmore Leonard and his rules for writers be damned.

Following the afterword that explains the provenance of this story, there is another bonus for the reader, "Mankell on Wallander," a short essay on "How It Started, How It Finished, and What Happened in Between." Here, Mankell traces the evolution of the series and tells us why (in his judgment) "Wallander became so popular in so many different countries and cultures." In this essay, one side of Mankell is quite prominent: the moralist, sympathetic to political activists on the Left, using fiction to address all kinds of issues: racism above all, but also predatory capitalism, abuse of women, religious fanaticism, and so on.

From all this a reader not actually familiar with the books could get a very misleading impression. Not that these passions aren't prominent in the Wallander series and (even more so, sometimes run amok) in his standalone novels (and his many plays). But in this essay there are only brief glimpses of Mankell in another aspect, Mankell the trickster, who co-exists somehow with the moralist and who gives the Wallander books their distinctive flavor. This is the Mankell who relates an incident from a few years ago in which a reader, "an elderly man," asked him, "I wonder if Kurt Wallander will vote for or against the EU?" Mankell's answer? " 'I think his vote will be the opposite of mine.' And I walked away before the friendly man had an opportunity to ask a follow-up question."

In January of this year, Mankell announced that he had been diagnosed with cancer. That gives us yet another reason to be thankful for the books we have, and for An Event in Autumn in particular.