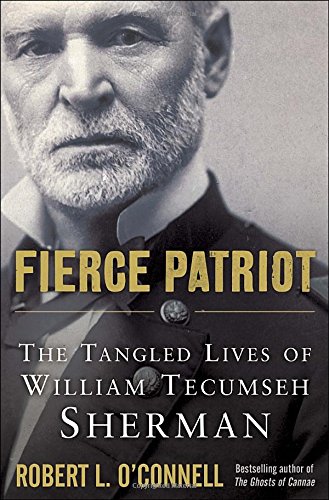 William Tecumseh Sherman certainly had a way with words. Not long after he captured Atlanta in early September 1864, Sherman infamously expelled the civilian population from the city, then justified his decision in an equally infamous manner: "War is cruelty, and you cannot refine it … .You might as well appeal against the thunder storm as against these terrible hardships of war."

Sherman had a reputation for unleashing a relentless rapid-fire of words—first as a West Point cadet, then young officer in Florida and California, then failed banker turned superintendent of a Louisiana military academy, then triumphant Civil War general, and finally postwar military commander of a vast territory from the Mississippi River to the Rocky Mountains. To every historian's delight, Sherman also lacked a sure filter between what he thought and what he wrote or said. Match that with a fondness for hyperbole, and you have a man who is easy to quote and easy to condemn.

Sherman the war criminal? While stationed in Union-occupied Memphis in August 1862, Sherman concluded, "As to changing the opinions of the People of the South that is impossible, and they must be killed or dispossessed."

Sherman the racist? Not long after completing his notorious "March to the Sea" across Georgia in November 1864 (still fuming over the several thousand escaped slaves who followed his army), Sherman proclaimed, "the negro should be a free race, but not put on an equality with the whites."

Sherman the cold-hearted exterminator of Native Americans? In December 1866, after a band of Cheyenne and Sioux Indians killed nearly 100 American soldiers in Wyoming, Sherman wrote, "We must act with vindictive earnestness against the Sioux, even to their extermination, men, women and children."

The words seem to speak for themselves. But they may obscure Sherman in myth and misunderstanding as much as or more than they reveal his character, his military career, and his legacy.

Robert L. O'Connell insists we judge the man "on what he did, not what he said." O'Connell's effusive new biography frequently offers an outright apologia.

Sherman the war criminal? Take a closer look again at his March to the Sea. While Sherman's army inflicted hardships on Confederate civilians, it did not indiscriminately rape, slaughter, and destroy—all the tragic hallmarks of 20th-century total warfare.

Sherman the racist? Although he did not ardently support abolition or racial equality, Sherman's Civil War army was an army of liberation. Where his men marched, slavery crumbled. Which matters more: Sherman's (wholly commonplace) racial bigotry or the fact that he led an army that decisively destroyed slavery in America?

Sherman the perpetrator of genocide? O'Connell admits that Sherman "bulldozed the Indians" in the western plains after the Civil War, but he argues that to scorn Sherman for this would be "wrong and hypocritical." Americans enjoy "living spaciously and abundantly" in the transcontinental nation that Sherman's actions helped secure. After all, the upward march of history ordained Native Americans to this somber fate; Sherman only hastened along their destiny.

In O'Connell's reckoning, Sherman's deeds mostly refute the condemnations leveled against him. His alternative take consists of three distinct portraits of Sherman's "tangled lives": as military strategist, general, and family man. Sherman's "lollapalooza of a life" convinced O'Connell that any attempt to confine his subject "to a single chronological track was bound to create confusion." So, O'Connell disentangles three dimensions of Sherman's life and narrates each one separately.

The story of Sherman the strategist is above all the story of his role in "the physical consolidation of transcontinental America." Over the course of the four decades of his adult life, Sherman became "virtually a human embodiment of Manifest Destiny." His grand goal as a strategist was a unified, continent-wide United States. He helped achieve this in pivotal moments of his career: from driving the Seminole out of Florida, to defeating the Confederacy, to battling western Indians and overseeing the construction of the transcontinental railroad.

Appropriately enough, though, O'Connell devotes the majority of this first portrait to Sherman's Civil War career. In the summer of 1863, midway through the war, Sherman's strategic genius blossomed. From then until the war's end, he perfected a hard-edged strategy for defeating the Confederacy. Sherman realized defeat was "ultimately a state of mind," which meant he had "to utterly demoralize the Confederacy by making it look helpless." Only then would the resilient Confederate people abandon their bloody rebellion. This strategy culminated in Sherman's march across Georgia and South Carolina in late 1864 and early 1865. Before embarking, Sherman assured a skeptical Ulysses S. Grant, "I can make this march, and make Georgia howl!" The second half of that cable, though less well known, is far more revealing: "This may not be war, but rather statesmanship." That is, Sherman's military strategy always had a political goal in mind: to woo Confederates back into the Union like a shrewd statesman. O'Connell also rightly notes that the deeds of Sherman's army during the March did not match the most ominous words of their commander.

Even so, Confederates knew Sherman as a military strategist who let loose the terrible hardships of war. But to the men who served under Sherman the general, he became "Uncle Billy," the iron-willed, energetic, dogged conqueror of the Confederacy who yet remained gregarious with a touch of modesty and an unwavering loyalty to his soldiers.

Sherman's men gave him the nickname," but the character itself was entirely Sherman's creation. He carefully cultivated the Uncle Billy persona. After all, effective generalship often demands a first-rate theatrical performance. Sherman played his part consummately well, costumed in a rumpled uniform and a straw hat. After a nearly four-month-long campaign to capture Atlanta in the summer of 1864, Sherman bathed nude in a river alongside his men. "I'd follow Uncle Billy to hell," one soldier confided to another after witnessing the scene played to perfection.

Unfortunately, O'Connell's account of Sherman the general goes off the rails with a sweeping, simplistic, and thoroughly unconvincing argument about Sherman's Civil War army: "it was not just the prototype, but the archetype of the American forces that followed." Sherman and his men "invented a new kind of army"—the quintessential democratic army—by being "creatively insubordinate" and embracing an "improvisational essence." Sherman's soldiers ingeniously adapted to the new challenges they faced, often without explicit direction from their commanders. Their "creatively disobedient" spirit was a distinctly American trait, O'Connell suggests, a product of the egalitarian ethos of mid-19th-century America. Surely Union soldiers stubbornly retained something of their attitudes, habits, and inclinations as democratic civilians. But O'Connell errs in trying to carve out a too grandiose significance for Sherman's career as general: as the man who midwifed, perhaps even fathered, the modern American army, at least its "innovative potential" and its "experimental and creatively disobedient" spirit.

O'Connell then jarringly pivots to his final portrait: Sherman the family man, an often tortured and tragic dimension of his life. Sherman was a child when his father died; he had, at best, an ambivalent relationship with his adoptive father (later also his father-in-law). His marriage was mostly strained and distant, especially later in life, not least because of Sherman's disdain for the fervent Catholicism of his wife (earlier his sister by adoption). Two of his young sons died during the Civil War, one as Sherman completed the March to the Sea. Sherman did not receive news of his son's death until the march was finished and the boy was buried.

This final portrait in O'Connell's triptych is awkwardly detached from the first two, tacked on as a sort of afterthought. The fundamental flaw of Fierce Patriot, by its end, is plainly evident: its fragmented, three-part structure tends not to make Sherman's more coherent. Instead, it often has the opposite effect.

That is to say, in pulling apart three interwoven threads of Sherman's life, O'Connell frays the whole fabric. Perhaps the most important thing about Sherman's "tangled lives" is precisely that they were so inextricably knotted up together in a single life. Are Sherman's roles as strategist, general, and family man really rendered more intelligible when viewed in isolation? Did Uncle Billy's symbiotic relationship with his soldiers not shape Sherman's military strategy in subtle yet profound ways? Did the heartbreaking loss of two young sons during the Civil War not intensify—perhaps help explain—Uncle Billy's affection for his men?

O'Connell dismisses Sherman's critics as offering only "blind alleys to a better understanding of the man." But O'Connell's biography is another kind of blind alley. It artificially severs Sherman's life into three pieces, as if the sum total of the man is no more than his individual parts. Yet that's as untrue of Sherman as it is of all people.