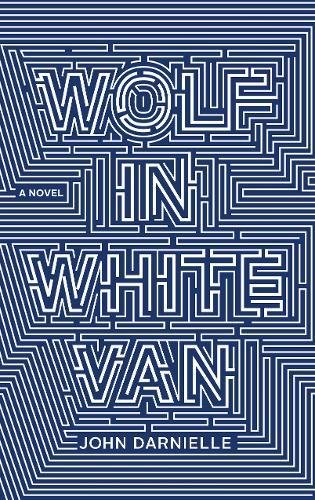 When the Wolf Comes Home

John Darnielle opens his new novel, Wolf in White Van, with a description of a father carrying his son to bed. This child, however, isn't exactly cradled in his arms. Following a devastating disfigurement, 17-year-old Sean Phillips cannot walk. His father hoists Sean up over his back, resting Sean's torso on his shoulders, and slowly shuffles toward the bedroom. Carefully turning at the door so that they can both fit through, he eases Sean pain-prone body down onto the bed. Then, "Dad squeezes my hand like I remember him doing when I was very small. We look at each other. Teamwork." It's a typically gentle scene in this tender novel about working through a life-altering trauma.

Anyone familiar with the work of Darnielle's band the Mountain Goats will recognize the emotion of that handholding moment as characteristic of Darnielle's songwriting, and yet its confident, paternal solicitude is something new in his work. Darnielle has spoken to interviewers about his childhood experiences with an abusive stepfather. Much of the band's 2005 album, The Sunset Tree, chronicles that relationship and how music became Darnielle's source of refuge. In "Hast Thou Considered the Tetrapod?" Darnielle sings of having incurred his night-shift working stepfather's wrath by waking him in the afternoon. He's in his bedroom with the headphones on when "you blaze down the hall,"

… and I'm guarding my face,
hoping you don't break my stereo.
because it's the one thing that I couldn't live without
and so I think about that and then I sorta black out

held under these smothering waves
by your strong and thick veined hand,
but one of these days I'm going to wriggle up on dry land.

The goofy title, the wry but poignant hopefulness, the deliberately deflated "so I think about that," the dreadful space separating those helpless young hands guarding his face from the "strong and thick veined hand" coming down—these are all hallmarks of how Darnielle's songs imagine the pain people can wreak on their closest family and friends. Yet Sean Phillips' opening memory of his 17-year-old self is different.

We don't yet know what's wrong with Sean or what has happened to him, just that his father must carry his weak and injured body to bed. Sean says it's a "cluster memory," since his father "did it every day, for a long time, from my first day back until what seemed like a hundred years later." Part of the memory is "a small bookcase with a painting above it, a western scene," which they passed on the way to his room. Here again, as in "Hast Thou Considered the Tetrapod?," fatherhood is juxtaposed with an aesthetic experience. The novel's difference from the song, however, is that where the music gave comfort, attention to the image unsettles.

If you look harder, or happen to turn your head at the right moment as you pass, you see figures, human figures, on what you might otherwise take for an empty ridge. It's like an optical illusion, this hunting party on the near hill, their curving hats dark in the orange dusk: they come out of hiding if you look at the empty scenery long enough … . They never lost their power to surprise just by being there, a little smoke rising from somewhere within their three-strong party, their brushstroke rifles resting lightly on their shoulders.

The reader eventually discovers that Sean's disfigurement is due to his father's hunting rifle, stored in a closet nearby. These surprising little figures have uncanny powers of suggestion. In Darnielle's fictional worlds, the arts usually provide a sense of shelter from the unpredictability of other people; yet here this painting secretly harbors violence whereas the real, live father consoles. The switch reveals the novel's conflicted uncertainty about its own carefully crafted musings on the innocent shelter that the arts can provide.

Wolf in White Van begins its narrative in the present and works backwards, telling the story of how Sean came to create the game Trace Italian, and why he found himself defending it in court one day. After his "accident"—we get intimations that he shot himself in the face, but we don't find out how or why until the last page—Sean gives himself entirely to constructing the imaginary world of his new game. "I'd gotten the name from dry days in history class during a lesson on medieval fortifications," Sean explains.

The trace italienne involved triangular defensive barricades branching out around all sides of a fort: stars within stars within stars, visible from space, one layer of protection in front of another for miles. The World Book preferred the term star fort, which I also liked, but in idly guess-working trace italienne into English I'd stumbled across a phrase that had, for me, an autohypnotic effect. Trace Italian.