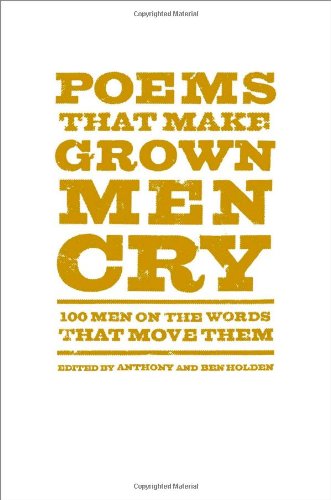 "What thou lov'st well is thy true heritage."

I might as well admit my skeptical first impression: Poems That Make Grown Men Cry? What kind of a title is that? Is this a threatening poetry anthology? The compilation of a playground bully who at his advanced age should know better by now? Next I placed the title within the framework of crass marketing—title as provocation ("we dare you, all you men, not to cry!"), and fitting all too conveniently in the growing subgenre of male-oriented literature, which of course should not be confused with the euphemism "men's magazines." (See, for example, Manthology, an excellent poetry collection of a few years ago, or the more recent The Book of Men: Eighty Writers on How to Be a Man.)

Then I enjoyed a few fanciful moments thinking of what actually would make a grown man cry; I was pretty sure, for most men, it wouldn't be a poem. Maybe that palpable letdown and viewer melancholy some men feel in the moments after the Super Bowl, especially a disappointing one like this year's lopsided affair, when men realize a big part of their lives will be on hold for several months. Or the ruthlessly manipulative treacle of the film Marley & Me—God help you if it catches you unawares. (I speak from experience of an awkward night watching the telly in a B&B in the Lake District; I'd rather not talk any more about this.) Or maybe it takes a sentence such as this one: "Honey, I just wanted to let you know that our daughter's/son's junior-high variety show, which let me remind you we are attending tonight, promises to be extra long this year." (Or, as one friend, who shall remain anonymous, once told his spouse, "If you're bringing me to any more of these, you're getting me an iPhone.")

So thank you, catchy poem-anthology title, for sending my mind racing ahead in various directions. In fairness, though, the book's subtitle provides a simple explanation: "100 Men on the Words That Move Them." We have here a collection of poems that have proven particularly moving to at least one man in the world. That sounds more promising, since I regularly check out anthologies of all sorts in hopes of finding just such meaningful, memorable inclusions, whether something new to me or something familiar that may become freshly moving in a new context. If you have interests as a reader that in any way closely resemble mine, then you will likely find much that it enjoyable and rewarding in Poems That Make Grown Men Cry, even if you never quite manage to get over the slightly annoying title.

The editors of this collection are an English father-son literary team, Anthony and Ben Holden. Its origins reside in two visits over a weekend in the mid-1990s. As the father, Anthony Holden, explains in a preface, he visited a friend enduring a domestic crisis, who at one point attempted to recite Thomas Hardy's poem "The Darkling Thrush" but was unable to get through it without being overcome by emotion. The bird of the title enjoys "Some blessed Hope, whereof he knew / And I was unaware." Shortly afterward, Holden met with the eminent literary scholar Frank Kermode and asked him, "Is there any poem you can't recite without choking up?" Kermode said immediately: "Go get the Larkin." For the next several weeks, Holden asked "every male literary friend" (why only men, I wonder) the same question posed to Kermode, and he was amazed how many said yes and how swiftly they did so. So that is how this anthology began, and it really is a worthy showcase of poetry's emotional powers and their effects upon us.

True to its origins, it is a very British collection: W. H. Auden appears five times (Rowan Williams chose "Friday's Child"), while Hardy, Larkin, and A. E. Housman make three appearances. (Seamus Heaney's preface for his selection of Hardy's "The Voice" offers a charming explanation: "I can't honestly say that I break down when I read "The Voice," but when I get to the last four lines the tear ducts do congest a bit.") Yet the collection overall is more diverse than this suggests: men of twenty nationalities chose works by poets from eighteen countries. Interestingly, only a dozen poems by women appear; maybe there's a "bro thing" when men are selecting poems that move them? I dunno. Three-quarters of the selections were written in the 20th century, and the topics range from love and mortality to the more expressly elegiac—losses of various sorts, personal tragedies, but also the loss of political ideals.

Approaching the topic more broadly, the son, Ben Holden, remarks that humans are the only species that cries, tears being, as Charles Darwin wrote, a "special expression of man's." For the younger Holden, tears reflect our vulnerability but also an openness, a capacity really to feel our experiences—and to feel compassion for the experience of others. (Amnesty International is a partner in this project.) "Let's celebrate high emotion!" he writes (perhaps a bit too sincerely). "However grievous the times, let these pages console you, if upset; lift you, if down; I defy you not to be inspired by them."