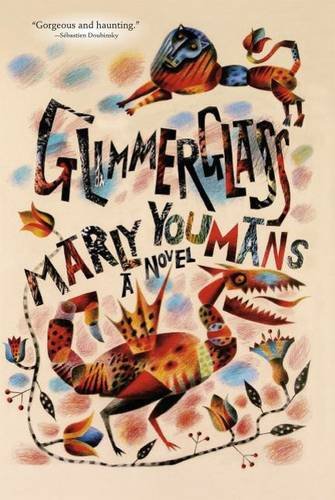 A new novel by "the best-kept secret among contemporary American writers."
November 2014

Some years ago, I described the novelist and poet Marly Youmans as "the best-kept secret among contemporary American writers." That's still true today (so I think), and if you haven't tried Youmans yet, her new novel, Glimmerglass, is a very good place to start.

There's a long tradition of stories and novels that have an imaginary painting (sometimes paintings, plural) at their heart: Balzac's "The Unknown Masterpiece," Henry James' "The Real Thing," Oscar Wilde's The Picture of Dorian Gray, Ross Macdonald's The Blue Hammer (his last novel), Andrew Klavan's The Uncanny, and many more—you could make your own list. Ayelet Waldman's Love and Treasure, one of the most interesting novels of 2014, centers on a lost painting.

Glimmerglass also centers on a painting. If the title sounds familiar but you can't quite place it, you must have been a reader of James Fenimore Cooper's Leatherstocking Tales sometime in your youth. Glimmerglass was Cooper's fictional name for Ostego Lake, near the present-day village of Cooperstown—"Cooper Patent," in Youmans' novel, another allusion.

Cynthia Sorrel, Youmans' protagonist, is looking at a cottage, formerly the gatehouse of an estate. An odd woman who seems to be the caretaker meets her there—Iz Hix, "a wizened creature, face finely pleated and hair in a tangle," with "pale needle-lines of scars on her hands and a slash along one cheekbone."

"What do you do?" Iz asks. "Are you taking a job in the village?" Cynthia hesitates:

She had almost said she was an artist, but it wasn't true. It hadn't been so for a long time. "I do watercolors of houses, or copies of family photographs. I sell a lot of street scenes in tourist towns like Newport and Saratoga."

Cynthia, we learn, is burdened with regret (not least for a foolish marriage long ago) but still full of yearning. Something about the place beckons to her.

This first chapter, titled "Cottage of the Seven Dwarves," sets the tone for the book. In this Portrait of the Artist as a Middle-Aged Woman, the everyday and the fantastic are inextricably intertwined. Cynthia rents the gatehouse and settles in. She meets the half-brothers, Andrew and Teddy, who are her landlords and who live together in Sea House, the seat of the estate, and she's especially drawn to Andrew, a widower. She meets Lydia Wren, the wife of the rector, Hale Wren, and goes to church. She explores her surroundings.

Now about that painting: One day, Cynthia sees a mysterious boy in the trees—he looks about 17, she thinks.

What was left of the artist in her felt [his] glance like a hard slap. He was simply not like anything she had seen before, his face appearing beautiful though irregular, eyes a startling blue even from a distance, and skin shining as the droplets of mist around him caught the sun. Cynthia forgot all else, drinking in the sight like a woman who has been thirsty for years. It was not about physical desire, though he had manifested as simply as the god Eros and shot a bolt at her heart.

This encounter inspires Cynthia to paint the boy, and from it everything else follows, including her discovery of a murder long ago. The painting itself—the best work she's ever done—is irreparably damaged when the creek overflows, flooding the cottage, but ultimately that doesn't matter: Cynthia's vocation as an artist has been unmistakably reaffirmed.

The notion of a painting—an imaginary painting—described in a work of fiction may seem rather odd. You can't google it—you can't view the image anywhere. And yet the very fact that it exists only in the shared imagination of the writer and reader seems crucial to its power.

Glimmerglass made me think of an early story by Eudora Welty, "A Still Moment," in which a painting isn't even described but merely implied, so to speak, but is nevertheless hauntingly present. Welty's story brings together three incongruous figures on the Natchez Trace: an itinerant evangelist, a criminal (who intends to rob and kill the evangelist), and John James Audubon, who sees a beautiful heron and shoots it so he can paint it. Welty writes,

What each of them had wanted was simply all. To save all souls, to destroy all men, to see and to record all life that filled this world—all, all—but now a single frail yearning seemed to go out of the three of them for a moment and to stretch toward this one snowy, shy bird in the marshes.

The artist's calling, "to see and to record all life that filled this world—all, all," is just what Cynthia accepts, and just what Marly Youmans fulfills in this wonderful novel.

One last note. We hear a lot about bad news in the world of publishing. And there is a lot of bad news to report. But let me register that this particular book is not only beautifully written but also beautifully made. The illustrations, by Clive Hicks-Jenkins, are superb. The typography, the entire design of the book: all bespeak care and skill that rhyme with Youmans' art and the story she tells. Blessings to Mercer University Press.