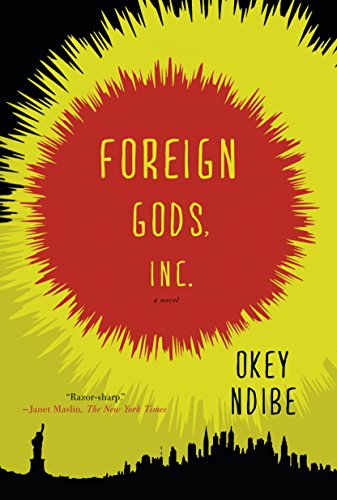 The bare skeleton of the plot of Okey Ndibe’s Foreign Gods, Inc.-- in fact, even the brief sketch on the jacket flap--has promise of almost parabolic resonance. But the storyline’s potential is diminished, even destroyed, by serious flaws on almost every other point of literary consideration: cartoonish characters, contrived and conventional situations, uneven diction, and the narrator’s irritating habit of interpreting the significance of scenes that no bright high school student would have trouble parsing.

Ikechukwu Uzondu (“Ike for short”) has a degree in economics, cum laude, from Amherst College, but has been driving a New York City taxi for thirteen years. His first obstacle to employment more fitting to the level of his education is his lack of a green card. The solution, when it comes, is worse than the problem: a shrewish wife pathologically obsessed with both sex and shopping. But the green card isn’t enough: despite earning all As in English at Amherst, Ike, we are told, has an accent that makes him all wrong for Corporate America: “The accent isn’t right. I can’t hire you,” a nameless, faceless interviewer tells him. Ike’s accent, his speech, comes up repeatedly as shorthand for his inability to belong anywhere: if his accent marks him as foreign in New York, his way of speaking marks him as foreign in his home village.

Struggling under the weight of debt (brought on, in part, by a horrific divorce from his sociopathic wife), Ike gambles in hopes of supplementing his taxi-driver earnings, and drinks to numb it all. Emails from family in Nigeria plead for financial help. A solution seems apparent when a friend hands him an issue of New York magazine profiling an art broker with the Dickensian name of Mark Gruels, who owns a gallery called Foreign Gods, Inc. Ike is “disgusted the first time he read Gruels’s story. The idea of a few wealthy individuals buying up so-called Foreign Gods and sacred objects just didn't sit well with him.” But then his friend encourages him to return to his village to steal Ngene, the war god of his people. When an email from his sister tells him that the local pastor, Uka, has insisted that the Ngene has to be destroyed “in a huge fire” so that millions of dollars can be “released” in blessing, Ike finds a justification for what has begun to seem like the solution to his inability to stay ahead of rent payments.

A long back story detailing the coming of Christianity to Ike’s people via the missionary efforts of one Mr. Stanton (whose name, on local tongues, turned into something that sounds a little too obviously like “Satan”) manages to include all the worst stereotypes of missionaries. (For starters, many readers will be reminded of Barbara Kingsolver’s Nathan Pryce, the crazed Baptist preacher whose rampages in Belgian Congo create the disasters of The Poisonwood Bible, though Ndibe’s tone is quite different from Kingsolver’s). Mr. Stanton is given to preaching peace and love one minute and then to slapping his interpreter the next.

A similarly flat portrayal of Pastor Uka follows. “Only those who tithe will be blessed,” he intones, as he and Ike battle wits, and as Ike discovers that his mother’s resources have been pouring steadily into Pastor Uka’s coffers. Ike’s mother wasn’t always a devotee of Pastor Uka’s brand of Christianity; they were Catholic, when his father was alive, and for Ike’s uncle, this was a point of ridicule as well. Ike’s uncle’s god, Ngene, gave him all kinds of things to eat--goat, yams, chickens --while Ike’s father’s God gave him “only a tiny wafer pasted on his tongue.” Such were the consequences when his people went from worshiping a powerful god of war to worshiping a God “whose love was so overpowering that he assented to being impaled.”

In another scene, Ike visits the home of a rich and powerful friend who keeps a room in his house for “poor people” to watch TV. They only appear to be entranced by an old game between the Lakers and the Bulls; actually, it’s the astronomical salaries of NBA players that dominate their chatter. Ike cynically (and unnecessarily) observes:

“they hardly cared for the dunks, the pump fakes, the cross-over dribbles, the fade-away jump shots from impossible angles. . . . These fans in faraway Utonki seemed enthralled by the basketball players’ storied wealth.”

Everyone in this novel is greedy and grasping, particularly women, including a former lover of Ike’s, Regina, who ditched him when they were teenagers for a richer guy, who ended up dying when a heroin-stuffed condom burst inside him at a British airport. She shows up at Ike’s family home, crone-like and destitute, with a crowd of children in tow. Ndibe’s description of her illustrates his tendency to awkward and overweening prose: “her pulchritude gone, her face--marred and joyless--was a macabre advertisement of angular jutting bones.” Really?

Similarly, when Ike encounters a bad odor upon opening the door to his New York apartment, “a sally of stench hit [his] nostrils. . . . It left a ghoulish impression, reminded him of feculent silt.”

“Feculent,” if you don’t already know (and I didn’t), is an adjective indicating that the noun modified contains dirt, sediment, or waste matter--an adjective that “silt,” being in itself dirt or sediment, hardly seems to require.

Does Ike break free from the cloying and fetid love of money? It’s unclear, but Foreign Gods, Inc., is not a hopeful book. It leaves the reader with disgust, despair, and yearning for something undefined and undefinable; if not the past, then some nostalgic re-interpretation thereof. It is a troubling novel, cynical and unredeemed by hope, whether foreign or domestic.