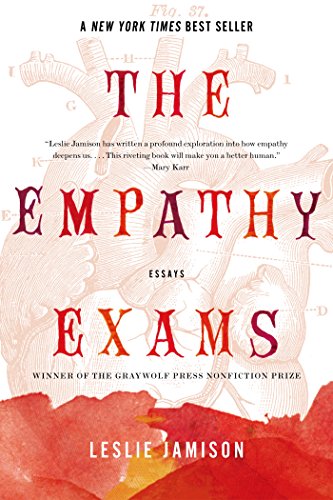 Empathy is a much-lauded virtue. We want other people to empathize with our situations, our losses, our joys, and our pains. We desire for others to comprehend our contexts for action. We want others to imagine who we are before they pass judgment. Empathy is the mechanism by which we attempt to figure out why others feel what they feel. We fear the lack of empathy. This lack becomes a sign that civilization as we know it (or how we imagine it to be) is on the decline. "Walk a mile in someone else's shoes" emerges as an easily deployed cliché. If we could just walk in your shoes, we could comprehend something important about your experience. This insight might change us. We might be considerate rather than cold, compassionate rather than indifferent, and kind rather than cruel.

Empathy, then, bears a heavy burden. Its capacity to let you and me feel for another is a complex tangle of emotions, affect, and gestures. It is never straightforward. Leslie Jamison's The Empathy Exams is a bracing study of empathy's promises, practice, and peril. From the first essay, on medical actors, Jamison rejects pat definitions of empathy as imaginative capacity, pointing out that it is also involves inquiry and connection. "Empathy requires knowing you know nothing," she writes, "Empathy means acknowledging a horizon of context that extends perpetually beyond what you can see." She forces us to recognize that we cannot truly know what happens to another person. We only predict and project. Her essays prod us to consider empathy's expectations and boundaries in discussions of medical actors, Morgellons patients, female pain, imprisonment, failed relationships, psychic wounds, ultra-marathon runners, and her own injuries.

Empathy emerges as fraught; it can't exist solely as a virtue because of the ways in which we unevenly practice it. Jamison models empathy while simultaneously scrutinizing and analyzing cultural expectations of empathy. She distrusts her own impulses and reactions to those she writes about. Who do we have empathy for? Who do we deny empathy to? Is empathy finite? What does it mean to open ourselves up to other people's pain? Can empathy be narcissistic? Jamison carefully documents the temptation to dwell in the wounds of another and to imagine that we were the wounded. Danger lies in dwelling in another's pain as a way to think about only yourself. Empathy can slip into voyeurism and self-involvement—but it doesn't have to.

The Empathy Exams is a well-deserved critique of those who dismiss all types of people in pain, especially those who perform pain: "cutters," for example. In discussing the hate directed toward cutters, Jamison reminds us that performed pain is still pain. People are wounded, whether they harm themselves or are harmed in some other way. Should our empathy be bound to notions of what authentic pain might be? No. Does compassion have firm limits? I hope not.

Jamison also counters the desire to secure the pained in tidy narratives of redemption, sacrifice, and loneliness. Take, for example, her essay on those afflicted with Morgellons disease, in which the main symptom is strange fibers or hairs emerging from the skin. Patients also described itching, sores, fatigue, and the sensation of insects crawling under their skin, so they scratched, burned, picked, and even electrocuted their flesh to dig these foreign objects out. The medical establishment, however, believed Morgellons was not a real disease but rather a delusional disorder with phantom parasites. In response, "Morgies" organized to document the reality of their affliction by using high-powered microscopes to find fibers and to talk to one another about how their bodies betrayed them. They took samples to their doctors. They hunted for any evidence to prove what ails them. Jamison captures the horror of their condition: "They are covered in records—fossils or ruins—of the open, oozing things that once were." She wants to believe them while recognizing that she cannot support them in the ways that they require. She agonizes, "But compassion isn't the same thing as belief. This isn't a lesson I want to learn."

What I admire the most about Jamison is her refusal to make humans into caricatures for the sake of coherence, closure, or a "good" story. We meander with her as she confronts trauma, mundane and life-altering; we pivot back and forth between the hurt of her subjects and her own wrangling with pain. She tells us that "[w]e are porous." We become caught up in the pain of others. Jamison helps us understand how woundedness can be both public and private. Sometimes, we want our pain to be obvious; sometimes we can't make it come into view. This collection is mesmerizing and heart-rending, as the particularity of pain becomes palpable. I flinched at the stark descriptions of physical and mental anguish. I cried for those who suffered. I wondered about how my own traumas weigh upon body and mind. I assessed my own wounds. This book made me uneasy, and it was intended to do so.

Jamison's lovely prose and brutal honesty reveal an uncomfortable truth: our pain doesn't necessarily have greater meaning. Our bodies let us down. They become battlefields. We're left with blood, tears, and scars on our traitorous flesh. In The Body in Pain (1986), Elaine Scarry described the unmaking of worlds (and words) through bodily pain and the making of worlds through imagination. Empathy allows the making of a shared world, a fledgling attempt to bridge the gap between your body and another's. Bodies create and destroy us. Jamison documents exactly what that means while encouraging us to make our empathy larger than might be comfortable. She writes, "I believe in waking up in the middle of the night and packing our bags and leaving our worst selves for our better ones." I hope we can follow her example.

Kelly J. Baker is the author of The Gospel According to the Klan: The KKK's Appeal to Protestant America, 1915-1930 (University Press of Kansas) and The Zombies Are Coming! The Realities of the Zombie Apocalypse in American Culture (Bondfire Books). She has written for the Atlantic, Chronicle Vitae, Faith Street, Religion Dispatches, and the Christian Century's Then & Now. She can be followed on Twitter @kelly_j_baker.