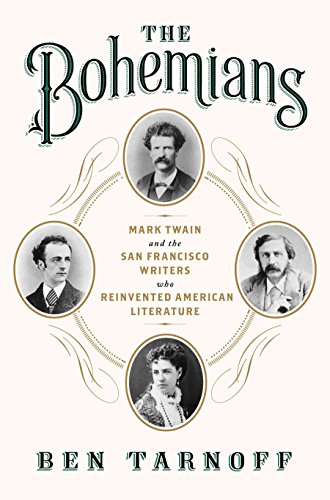 What San Francisco and the Bohemians seemed to give Twain was a mental gym for him to exercise in. The life of the city and the culture of experimentation in the literary scene gave him loose borders to work within. The Californian was a snarky young paper, unconcerned with the rules of journalistic integrity. "Despite its tasteful typography," Tarnoff writes, it "still felt young…quicker to criticism than to creation. Its strongest suit was always parody—parody as a petri dish for the budding writer: a way to study style, to digest influences, to ventriloquize different voices." These loose parameters were perfect for the rowdy Twain. He wrote countless columns with half-truths and sometimes flat-out lies, provoking uproar and indignation—and wild delight—throughout Northern California. This mental exercising and bending of rules is what began to set him apart.

Reading The Bohemians, I found myself constantly waiting for the next time Twain would be mentioned. Certainly each writer had his own merits and his own story—Coolbrith's depressive states and Stoddard's closeted homosexuality—but all pales in comparison to the distinctive Mark Twain.

Tarnoff explores in detail what we have not seen in total: Twain's early community. We've known him to be a social butterfly and a bit of a rock star during his early years lecturing; we've also known he wrote constantly to his family. But The Bohemians lets us see Twain in conversation with friends he called by extremely affectionate names while he was still a young man and a writer lacking confidence (something he would certainly have plenty of later). We observe his short exile in the Sierra Mountains, where he was laying low after his roommate nearly killed a local bartender. We are taken into the offices of the newspapers he abused and the letters he exchanged with the rest of the Bohemians, who were proficient name-callers with passionate pens.

This is a feast for Twain-lovers, but it is also a book that helps us better understand our own time. Reading about the early days of papers like The Californian and the explosion of new publications in the West brings to mind the rise of the Internet: we are living in an electronic Wild West, where a new "publication" launches every day and people are reading more than ever, albeit reading in a different way. While there is certainly no Gold Rush, it has never been easier to publish your own words than it is today, and many of the laws have yet to be made regarding this electronic territory. My only question whether our Wild West houses the same immense talent that came from the Bohemians.

Chris Nye is a pastor and a writer living in Portland, Oregon, with his wife, Ali. Connect on Twitter: @chrisnye