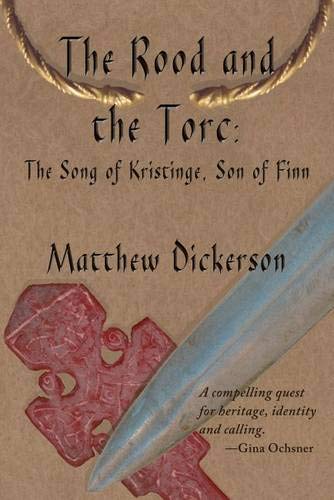 The Rood and the Torc

Critics and reviewers often talk about "historical fiction" as if it were one thing, easily mapped. It is not. A genre that encompasses Rafael Sabatini's Captain Blood and Penelope Fitzgerald's The Blue Flower—to take just two outstanding and wildly contrasting examples—is capacious indeed. And of course historical fiction isn't limited to novels and stories and the like; it also flourishes (or takes pratfalls) in narrative poetry, in movies and on TV, in painting, and so on. At its best, whatever form it takes, historical fiction evokes the otherness, the sheer strangeness of the past, even as it conveys an essential human connection across time.

In The Rood and the Torc: The Song of Kristinge, Son of Finn, Matthew Dickerson takes us to Northern Europe in the mid-7th century, when Christianity was both spreading and meeting sharp resistance. Dickerson, who has taught for many years at Middlebury College, has written several books on Tolkien and Lewis, but he has taken up other subjects as well, including fly-fishing (one of his great passions). When we first met, around 2007, I already admired him as a writer, having read his 2006 book From Homer to Harry Potter: A Handbook on Myth and Fantasy. We have become friends, as I am duly reporting here, but I can recommend this new book of his without partiality.

Kristinge, the winsome protagonist of this tale, has been raised by the missionary monk Willimond, who knows that his young charge is the son of Finn, a Frisian chieftan, and his Danish wife, Hildeburh. Finn was killed and their village was destroyed by the Danes; Hildeburh survives. The story is set in motion when Kristinge, now a young man, learns his true identity: he is the son of a king (though "king" may suggest a realm on a scale much grander than the very modest territory Finn had presided over.)

A king's son, a monk by training (and a Christian by conviction), Kristinge is also a bard, and that role allows him (in Willimond's company) to begin unraveling the story of his father's death. Kristinge's skill as a bard wins a place for him and Willimond in the hall of a Danish chieftan, Fjorgest, in the village where Kristinge's mother is living. But his skill, and the Christian message in the poems he sings, also provoke the deadly enmity of Sceaptung, Fjorgest's skald, who is allied with the pagan priests determined to resist any incursions by the new faith. And finally, often in the background but never truly absent, there is a love-story.

One of the great pleasures of The Rood and the Torc is the way in which Dickerson weaves poetry into the narrative, sometimes in his own translations of classic Anglo-Saxon poems and sometimes in poems that he has himself composed. These scenes, in which Kristinge recites his verses at night in the mead hall, are spell-binding, not least because, hearing the miracle of the wedding at Cana, say, transposed into this setting, this idiom, we are reminded of the translatability of the gospel message, its ability to take root in any language in any culture in any land. With these delights and much more (including a primitive precursor of today's fly-fishing), anyone who hunkers down with this novel—with a cup of mead or a simple glass of water—will be richly rewarded.