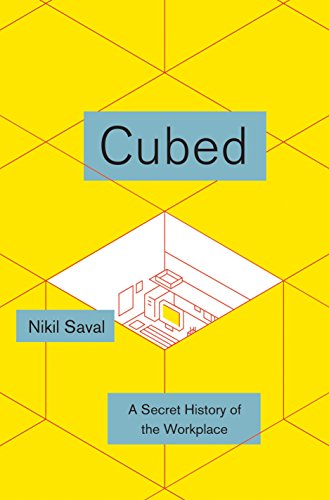 An ambitious history of the American workplace.

Imagine the following scene: seated at either side of a conference room table are an employee for a software company and two consultants who have been hired to review the firm's efficiency. The consultants, both named Bob, are backed by a glass wall on the other side of which are rows of cubicles lit by rows of fluorescent lights. The consultants find that Tom's job is quite literally useless. "You take the specifications from the customers, and you bring them down to the software engineers," they say. Tom confirms this, but also admits in the process that his secretary is the one who physically takes the printed specifications to the engineers. He becomes increasingly agitated as they question him. "What would you say you do here?" they ask. "I have people skills," he screams. "I am good at dealing with people!"

Imagine another office: this one is dank and darkly lit, illumined by a small sky-light and windows that open out to brick buildings mere feet away. It is the small Manhattan office of a 19th-century lawyer who employs four clerks. When the lawyer interrupts one of the clerks, Bartleby, who is otherwise hard-working, to perform an additional task, he is rendered speechless when Bartleby says, "I would prefer not to," and walks away. The lawyer follows him to his desk and asks him again, but Bartleby only responds to repeated petitions with defiant politeness: "I would prefer not to." The lawyer is appalled but can find no way to force the hand of a clerk who refuses to cooperate and refuses to leave.

These two scenes are easily recognizable. The first is from the late-1990s film Office Space, one of a generation's defining depictions of the banalities and disappointments of the modern corporate office. The second is from Herman Melville's "Bartleby, the Scrivener" (1853), a celebrated short story that depicts the ennui and neuroses endemic to countinghouses. Both bookend Nikil Saval's Cubed: A Secret History of the Workplace.

Cubed is an ambitious and remarkable book—a cultural and social history of the office that makes smart forays into architecture and design as well as managerial theory and business psychology. At its heart, it tells a story about corporate capitalism seen through the spaces in which white-collar Americans have worked. These spaces are the site of the struggle between capital and labor; at the same time, they are the places where so many have convened five days a week to earn a living and, in some cases, find satisfaction as well.

Cubed begins in the early 19th century with the modern office worker's ancestor, the clerk. In those days when men like Bartleby walked the streets of major cities in detachable and immaculately white collars and other trappings of pseudo-gentility, the clerking class represented a small portion of workers. There was a great deal of anxiety about the place of the clerk in society. What exactly did they produce? Unlike factory workers or farmers, they didn't make anything. They mostly copied documents and kept account books. Critics like Henry David Thoreau, who upheld Jeffersonian notions of producerism whenever he had the chance, mocked the bookkeepers in Walden. He spoke for many Americans who saw clerks as members of an alien class that reaped where they did not sow.

The relative paucity of clerks would soon change. Between 1860 and 1890, the number of those who worked in "professional service" grew from 750,000 to more than two million. Twenty years later, the census counted nearly four and a half million office workers. In the classic explanation of the historian Alfred Chandler, Jr., the transportation and communication revolution that came on the heels of the Civil War had called forth a new kind of organization—the modern business corporation. All those trains and telegraphs required coordination and that could only be accomplished by means of an emerging group of middle managers, "paper-pushers," and specialization among all workers.

In a few years the corporate ladder was born and the modern office with it. Whereas in Bartleby's countinghouse the clerk and the partner worked together, in these new spaces hierarchy was immediately apparent. Increasing specialization in the office made tokens of status significant: managers received wooden furniture in private offices while clerks settled for metal desks in open rooms. And as business theorists like Frederick W. Taylor made strides in conceptualizing new means of efficiency, the office would go through a number of revolutions in management's ability to quantify and surveil the actions of office workers.