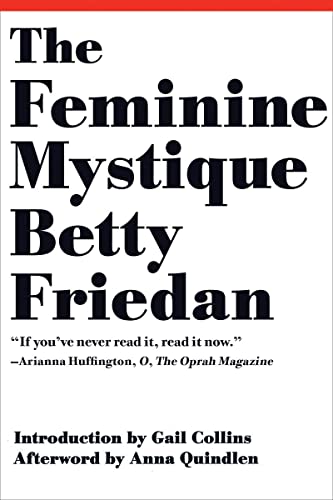 Why We Still Need "The Feminine Mystique"

The surprising Christian anthropology at the heart of Betty Friedan's book.

Last fall, I joined more than 200 Christian women at the American Bible Society in central Manhattan to discuss identity, ambition, and vocational calling. Hosted by Q Ideas, the one-day event was a sort of "Lean In for Jesus," where we were summoned to take risks, discover our gifts, and influence our communities. Such messages are familiar—chances are you'll hear similar ones at Women of Faith events and MOPS Bible studies. But the Q attendees seemed to want more than spiritual encouragement. Or, they at least wanted the kind that spoke to a public, professional role as much as to a private devotional life.

One of the talks, from Chicago-based writer Shauna Niequist, could have been borrowed from The Feminine Mystique, which turned 50 last year. I had not read it until last fall, as I began to work on a project about women and work. In Friedan's book, I found a surprising resonance with Christian views on vocation, gender, and personhood. The following essay is, I hope, a positive contribution to an often divisive and shrill debate about women's roles. Fifty-one years since its publication, Friedan's book moves us beyond roles into something more wonderfully human. —KB

Shauna Niequist's mom had spent almost all of her adult life being a pastor's wife, mother, and homemaker. She excelled in all of these roles. But 17 years in, she walked into a counselor's office and said, "I don't know who I am anymore. Something has to change." Through counseling, friendships, and prayer, says Niequist, her mother unearthed the gifts and passions that had drawn her to a social work degree. "I found my voice in my 40s and my vocation in my 50s," Niequist's mom, now an advocate for peace-making in the Middle East, said. "So the good news is that it's not too late for any of you." Indeed, all of us at the conference where Niequist told her story were getting a head-start.

Betty Friedan would have been proud. Surprised, too, perhaps, to see her ideas—dissected and debated for a half-century now—fleshed out in a faith community not always friendly toward her. In The Feminine Mystique, 50 years old this year, Friedan dared to name "the problem that has no name" for a generation of American women after World War II. The problem, whispered in private interviews and evidenced by high rates of depression, alcoholism, and worse, was that middle-class women were very unhappy. Outwardly they were rich, but inwardly they were wasting away. Why? On the well-trod path to marriage, children, and homemaking, Friedan posited, these women had lost themselves.

How quickly things had changed for women in Friedan's time. By the mid-20th century, they could vote and own property, sit next to men in college classrooms, and pursue careers, often living alone in city centers. Women like Lucretia Mott and Elizabeth Cady Stanton had enlivened both the suffrage and abolitionist movements, often forming bonds with blacks in a uniting quest for equality. While minority and lower-class women had long worked in factories, middle-class women joined their ranks during World War II to boost wartime efforts. Women's magazines of the time printed stories of heroines "marching toward some goal or vision of their own, struggling with some problem of work or the world," wrote Friedan. "These New Women were almost never housewives; in fact, the stories usually ended before they had children." The New Woman left home to grow up, attracting men by courageously pursuing her dreams, not by passively waiting for him to give her marriage and children and, thus, identity.

But after World War II, Americans largely retreated to the safety and stability of home. The GI Bill of 1944 gave returning soldiers money to build houses outside the city. They married and had babies: more babies in 1946, in fact, than ever before: 3.4 million, 20 percent more than in 1945. Most middle-class women who had joined the war efforts returned to being full-time house-wives. "Fulfillment as a woman had only one definition for American women after 1949—the housewife-mother," wrote Friedan. By 1958, she observed, the three major women's magazines lacked a single story of a woman "who had a career, a commitment to any work, art, profession, or mission in the world, other than 'Occupation: housewife.'"

It would be one thing if the women had surveyed all the options and had chosen mothering and homemaking as their one pure desire. But human desire, we know, does not arise in a vacuum. Powerful narratives of meaning seed it—especially, in a post-industrial society, narratives told by advertisers and print media. James K. A. Smith, philosopher and author of Desiring the Kingdom, has in recent years examined the role of desire in human and spiritual formation. "We are recruited to visions of the good life apart from our conscious choosing," Smith recently toldChristianity Today. "It's not a question of whether you're being conscripted to some vision of the good life; it's which vision of the good life."

"Since the time of Friedan's writing, American men have taken up nearly twice as much housework (defined as maintenance, chores, and childcare), and time spent nurturing children has increased for men and women alike." I would be interested in seeing documentation for the statement that time spent nurturing children has increased for women since Friedan wrote. Thanks to anyone who can help on that.