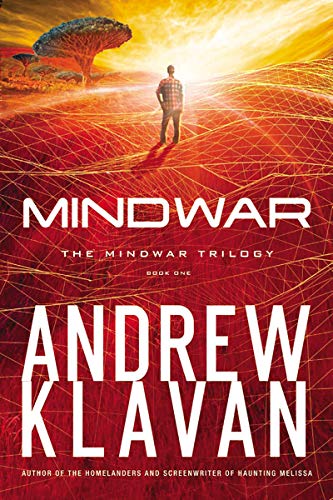 Now about those video games ...

Women read fiction more than men do; girls read fiction more than boys do. The category known as Young Adult fiction—flourishing these days—is skewed heavily toward what are assumed to be the tastes of young women. ("Assumed" because there are readers who confound such notions, along with a majority who indeed fit the profile. When I was a boy, I loved adventure stories—anything featuring a murderous giant squid was a good bet—but I also liked to read my mom's copies of Ladies' Home Journal.) Friends with sons ask me to recommend good "boy books": they can't find enough of them.

One writer I point them to is Andrew Klavan, a masterful suspense novelist who branched out into Young Adult fiction a couple of years ago. His latest is MindWar, the first book in a projected trilogy. Here's the set-up: A diabolical Russian genius, Kurodar, has taken the "Brain-Computer Interface" far beyond what was supposed to be possible. He's created a kind of parallel world, the Realm, from which he can wreak havoc in our familiar world. In particular, he intends to rain destruction on America—much to the satisfaction of his funders, a secret network of tyrannical governments, the Axis Assembly. (Yes, Klavan is having fun here, tweaking those high-minded types who were outraged, OUTRAGED, by the notion of an "Axis of evil." Who were we to point the finger? Who were we to be so presumptuous as to name evil? And so on. Interesting what gets people angry.)

Who can stop them? Rick Dial, who should be starting his freshman year at Syracuse University on a football scholarship. Instead, he's moping around at home in a college town north of New York City. Four months earlier, he was broadsided by a panel truck at an intersection right by his house, severely injuring his legs; the once-fleet quarterback is hobbling on crutches. He spends all his time playing video games.

But Rick's life began to fall apart a few weeks before the accident, when his father—a science professor at the local university, a devoted family man, and a devout Christian—took off, leaving a note saying that he reconnected with an old flame. Rick, his mother, and his eight-year-old younger brother, Wade ("Raider," who idolizes Rick), are left to pick up the pieces.

The action of the novel gets rolling when Rick is abducted by a shadowy agency. The leader of this group, Jonathan Mars, explains Kurodar's plan to Rick and then tells him they want to send Rick into the Realm to help them stop the Russian and his lackeys—if Rick is willing to take the risk, which is considerable.

This scene is one of my favorite bits in the book. Rick, quite naturally, is incredulous—and he feels even more cognitive dissonance when Mars asks him, in what seems a wildly incongruous change of subject, if Rick is familiar with a video game called Dragon Soul 3. Yes, Rick says—baffled, frustrated, wondering what is going on. Mars tells Rick that he has the highest score ever recorded on that game—by a considerable margin. And the same is true for Starlight Warriors and Zombie Apocalypse 5: The Return.

The humor of this is delicious, coming at a moment when an apocalyptic threat has just been revealed—quite real, not a paranoid fantasy. Rick is uniquely equipped to enter the Realm and fight against the threat because he is freakishly gifted at video games and has honed that talent: his quick athletic reflexes, but also his analytic skill as a quarterback—and his imagination.

A good deal of what follows is relentless action (the novel's table of contents mimes the structure of a video game, with ascending "levels"), and while there's a resolution of sorts at the end of this first volume—Kurodar's immediate plan is foiled—the larger threat remains (and there appears to be a mole in the agency that scooped up Rick). Most readers will be waiting impatiently for the second volume of the trilogy, Hostage Run, which is scheduled for publication in March 2015.

Count me among those impatient readers.