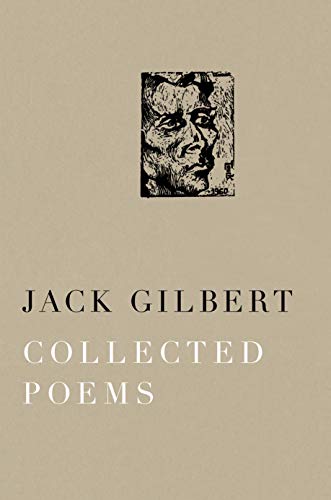 A birthday garland for Jack Gilbert.

So long and with such passionate commitment did Jack Gilbert identify with poetry—and not only with poetry but with the fierce purity (of language, of life) that for him signaled poems at their best and truest—that for some it may have seemed a sad but well-timed end when he died in November 2012, surrounded by friends in Berkeley, from complications from pneumonia and after a struggle with Alzheimer's. He was 87. It was a culmination of a life independently lived, with much of it willfully lived at a distance, even as the appearance of his Collected Poems, published earlier in that year by Knopf, culminated a half century of Gilbert's writing. The book ranged from Views of Jeopardy—his first poetry collection, which made him, briefly, a hip, handsome literary celebrity—to a handful of uncollected poems. With that work of decades collected, what was left to do? What was the end of life (in terms of overriding purpose) as the end of life approached? To live the moment and be true in it, maybe. And, increasingly in his later books, to take seriously thoughts of God, whatever God is or means.

The culmination at once of Gilbert's life and poetry can be seen as fitting, for he always seemed to feel assured that he was a capital-P Poet. He embraced fully the discomforts but also the glories that were the job requirements—passion and isolation, the heights and depths of a life carved down to essentials, but essentials that were in the poet's mind of the greatest extravagance. At times Gilbert even sounded like a prophet of sorts, albeit one of personal experience, of the days and years rightly, honestly spent. "I had a lot of luck," he said in a 2005 Paris Review interview. "But I was also very, very stubborn. I was determined to get what I wanted as a life." He was a prophet who for long stretches forgot the nation needful of hearing, which is any prophet's primary audience. He may not have minded the pairing of his life and his poems, then, but he would have strong opinions on which deserves—nay, must have precedence. As he puts it in one poem in Monolithos, "Not wanting to lose it all for poetry. / Wanting to live the living."

Ideally, as the Gilbertian outlook would have it, one should be active and engaged in an authentic life in an exotic place—"I didn't visit places; I lived places," he said once when asked if he felt like an expatriate when living abroad. And as with travel, so with writing: you are simply doing poetry rather than talking about it, or referring a little pathetically to what your poems may get for you and what other poets are getting. The opening poem in his first book registers this ambivalence toward the art he loved. "In Dispraise of Poetry" speaks of the King of Siam who punished a courtier he disliked by giving him a beautiful white elephant: "to care for him properly meant ruin," yet it was worse to neglect or mistreat the elephant. "It appears the gift could not be refused," the poem concludes dryly, ushering readers forward into a collection that was now framed as a product of a poet at times intense and inspired and at other times begrudging and resigned. Pondering Gilbert's stance, I recall a comment by Wendell Berry. "From our constant and increasing concerns about health, you can tell how seriously diseased we are," he remarked in a 1994 speech "Health is Membership." Disease, Berry explained, makes us conscious of the state of our health, whereas health "is at once wholeness and a kind of unconsciousness." Likewise, for Gilbert poetry emerged as a natural product of noble living. Focus on the heart's mysteries and the poetry will take care itself, and there indeed is a naturalistic element in the direct statements and often spare, clean lines of Gilbert's poetry.

For him, the choice was easy: life, and in multiple interviews he disdained lesser poets, and lesser livers of life, those who sought out experiences merely for the sake of accruing material for their poetry. "I'm not going to farm my heart," he said in one interview in 1995, on the occasion of receiving the Lannan Literary Award. He also spoke of the "tough life" of his peers who attended endless dinners and readings in New York's or Boston's literary scene. "And they were right … for them." They deserved their success, he said, but for him this public, traditional acclaim required too high a price. "You call that happiness?" he asked. Such views did not always earn Gilbert a warm reception in the poetry world, and sometimes he could sound like a recluse who is comically out of touch, as when he declared in that Paris Review interview, "I think poetry was killed by money." Most American poets, working on the margins of popular culture and rarely achieving the kind of success that they would think of, a little exotically, as "commercial," would beg to differ. But then again, Gilbert was judging by a different scale, by a standard compressed to essentials. Better to seek out life for itself, he says, in so many words, in so many of his poems. "Life, as the ultimate unity, lies at the basis of the poeticized," writes Walter Benjamin, and Gilbert agreed.