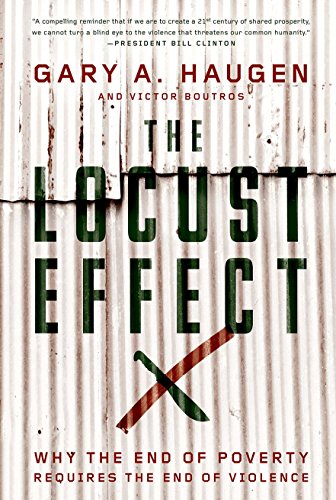 Why development without public justice is bound to fail.
February 2014

Just now, there is a small subterranean war in American evangelicalism about who Abraham Kuyper actually was. Jamie Smith, reporting from the front lines of James Bratt's magisterial new biography of Kuyper, cautions us to receive "Kuypers" with suspicion until we've read about the man's life and legacy. But while the bun fights of theologians and theorists go on, Gary Haugen and Victor Boutros have claimed and revitalized a very real Kuyper, in my opinion, with a practical, pressing theology of public justice. The Locust Effect yields the best of his legacy.

Like Haugen and Boutros, Kuyper wrote during a time of major social crisis, one characterized by not only an alarming and widening gap between the rich and the poor, but also the corruption and atrophy of institutions of public justice. Haugen and Boutros, in making their case that building those institutions out of the ash of corruption has been done before, cite almost entirely late 19th-century sources: Kuyper's world. And it was in that context that Kuyper developed what the English world has come to call his architectonic critique, writing in 1889: "we must courageously and openly acknowledge that the situation calls not only for the physician but most certainly for the architect as well."

Therein the parallel to The Locust Effect, which describes public justice as the "the most fundamental and the most broken system" in a developing world full of broken systems (p. 128; for a full primer see their 2010 Foreign Affairs article, "And Justice for All"). Haugen and Boutros hasten to qualify that they are not dismissing poverty alleviation, clean water projects, micro-finance, health care (etc.) as merely secondary concerns, or that these initiatives should receive less resourcing, but rather that the positive development these projects make cannot be secured apart from the rule of law. The non-governmental world has caught up with the fashionable ideas of When Helping Hurts, of the now well-aged debates over efficacy and models of foreign aid, but it has been slower to recognize that no kind of development can be secured, can last, if the poor live in fear of violence, and if even their modest gains can be ripped out from under them by systems of justice which not only fail to protect but all too often actively harass and destroy. What's required is nothing less than what some have called a "simultaneous realization of norms."

Paul Collier, the famous economist and author of The Bottom Billion, has already given us a reasonably readable and academically sound picture of what that package of norms might be. Public justice and the rule of law of is one of four critical pieces (his list comprises foreign aid, security, trade, and laws and charters). Any approach to development, argues Collier, that focuses solely on only one or two pieces of this package tends to fail. Hernando de Soto, another economist invoked in The Locust Effect, makes a long argument that no development can take place apart from the basic settlement of property rights, or the rule of law which tells you who owns what and how legitimate buying and selling can go on.

So we need special and sustained attention to governance, to the rule of law, which has been seriously neglected by the NGO community, according to Haugen and Boutros, but we do not only need such attention. Skimmers of The Locust Effect may find themselves alarmed that a more holistic approach is not foregrounded, but the book is meant to focus on one of those elements, what it calls the most fundamental, not dismiss the others. It is a call especially for the NGO world to recognize that although we may be turning the page on our helping hurting, we haven't turned the page on sustaining our helping, structurally transforming systems of gross injustice. We must, in other words, courageously and openly acknowledge that the present situation calls not only for the physician, but for the architect as well.

The Locust Effect does somewhat surprisingly run the risk of being overly technical at times, a technicality liberal political scientists can adore (pilot projects on how to build systems of justice, step-by-steps, empirical studies, etc.), but public theologians may find it a little lopsided.

The great and marvelous thing about developed public justice is not merely that it keeps my neighbor from stealing and raping; by far the greater and more marvelous thing about developed public justice is that such an inclination almost never passes my neighbor's mind. The astonishing metric of success is, in fact, not enforcement itself but the relatively thin level of enforcement needed. There is no police state large enough to coerce its citizens into moral behavior; coercive power is a blunt, last resort. If Canadians (or Americans) wanted to overthrow the police, we certainly could: our officers of the peace have neither the numbers, the mandate, nor the firepower to resist such an onslaught. No, what is marvelous is that we (or most of us, at any rate) do not want to overthrow our police; they are our public servants, and we respect and obey them not only out of "fear of the sword" but also a formed desire for peace, order, and good government (at least in her Majesty's Dominion). Therein lies a political culture that is the benchmark for highly functioning public justice.

But I wonder if we don't then also need to hear from another 19th-century voice, one whom Kuyper much revered in his own day, that of Pope Leo XIII and his encyclical Rerum Novarum. Leo's bracing argument in that encyclical was about development too, about the deep and widening divisions between the rich and the poor, about the abuse of laborers, and about building sustainable systems of public justice. Only two years after Kuyper's "On Manual Labor," Leo wrote in Rerum Novarum that "if human society is to be healed now, in no other way can it be healed save by a return to Christian life and Christian institutions."

These two men, Abraham Kuyper and Pope Leo XIII, had much in common (evidenced by the Bavinck Institute hosting a consultation on Rerum Novarum in Rome this fall), but one of the most significant commonalities was their call for a public theology to underwrite a renewed social architecture, a robust public justice.

That is one of the somewhat conspicuous absences in The Locust Effect. Not that the International Justice Mission should somehow transform into church mission—the IJM's missiology of justice is very fine as it is—but in tackling the hugely important and enduringly vital work of state building and justice-making, there is less attention paid to the political cultures that must grow alongside, simultaneously with, the institutions of state and law. This gap is more conspicuous if only because of what Scott Thomas calls the context of the developing world, where strong religion and weak states are often the rule, and many social and political communities are struggling to make—or not to make—the same legal and political transformations that the developed world has undergone. This is not just because of the easy answer of corruption, but because sometimes the models of Westphalian statehood and its attendant sovereignty are repulsive to other political theologies. Hence today's explosively controversial debate over the nature of pluralism, of westernization vs. modernization, of what ideas and norms make possible, or are carried by, certain political forms and institutions.

The locusts of lawless violence, as Haugen and Boutros write, have indeed "been allowed to swarm unabated in the developing world … laying waste to the hope of the poor," but the high-water mark of public justice—the goal, if you will—is not only a state with the institutions to restrain violence, but a political culture which demands, over time, less of that restraint. I do not mean utopia, as though on this side of the eschaton the coercive power of the state (or its deterrence) will ever pass from need. I mean only that simultaneous to the technical institutions of justice must be the growth of political solidarity, of "faith in our common life."

The one sally Haugen and Boutros do make into political culture is the dynamic they call the 15-70-15 Rule, though they admit it has no social scientific basis. With it, they mean to say that 15 percent of the populace wake up intent to game the system in a predatory way, 15 percent wake up earnestly ready to do good, and 70 percent wake up waiting to see who gets the upper hand and follow along. That insight tracks with Hannah Arendt's report on the "banality of evil," though it also underscores how essential cultural formation is. The logical conclusion is otherwise not altogether different from most of the post-apocalyptic blockbusters in today's media marketplace: once the systems and institutions which secure our humanity collapse, a Hobbesian war of all against all will erupt (tellingly, Thomas Hobbes is invoked several times in The Locust Effect).

The metaphor that provides the title of The Locust Effect, then, is not one that I love: locusts are a plague of nature, of God, a sweeping deus ex machina, a devouring force of nature. The sin of the human heart certainly can seem that way, but the cultural formation of desire matters too: it deserves saying that it is not only the deterrence and protection that developed systems of public justice have in their favor, it is their broad public legitimacy. No public justice system, developed or not, can ward off the hordes of locusts Haugen and Boutros describe. The essential challenge is the root of the swarm, not only its deterrence. Law has a moral role, certainly, but it is not the only or even decisive source of such morality. This is precisely why religion being absent from any conversation about structural transformation in what Philpott, Toft, and Shah call "God's Century" seems a bit odd.

Of course, a good place to start, a critically overlooked one, is building capacity in the world's public justice systems. But it is not only the place. It must be concomitantly realized alongside other basic things, like economic and social development, and most essentially a growth in (often political-theological) legitimacy of those institutions, for which certain basic freedoms, like freedom of religion or belief, are indispensable.

Good news here too: the conversation and practice between both technical institutions of public justice and the political culture that sustains them is getting onto the front of diplomatic agendas, through organizations like Chris Seiple's Institute for Global Engagement and Brian Grim's new Religious Freedom & Business Foundation. The Locust Effect is an outstanding and long overdue contribution to a development conversation with some very exciting voices; it shouldn't be read alone, but it also should not be missed by serious advocates of public justice.