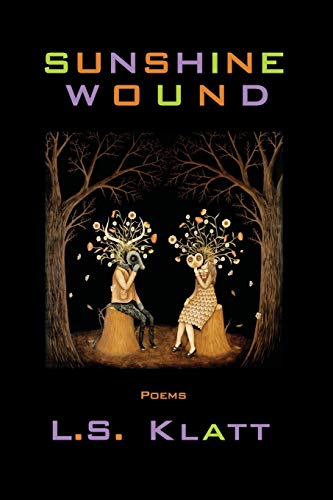 L. S. Klatt paints much like Vincent van Gogh: both use bold, vibrant images formed from thick-laid colors. The difference is that Klatt paints with words. In his new book, Sunshine Wound, Klatt works to strengthen the "dream power we are apt to forget" by kneading startling images to form an "impasto on withering / things like fingers & legs." These lines come from the poem "Painters on our Way to Work," a title adapted from one of Van Gogh's paintings. This painting was lost in World War II, and the tension between the imagination's restorative "dream power"—the "sunshine" of the book's title—and irrecoverable losses forms the backbone of Klatt's book. As this poem concludes: "The sunlight can make us crazy; think of the gun / in the painter's smock as crows light on shocks of wheat." Dwelling behind this poem is the knowledge that the painter who saw light play over the texture of sunflowers finally took his own life; we live in a wounded and sunlit world.

To shift metaphors, Klatt's poems repeatedly sound this interval between sunshine and wound, seeking to hear both the dissonance and harmony opened by these notes. For while it seems the light should strengthen our dream power, sometimes it "can make us crazy." "A Discovery Said to Fail" probes this possibility and considers what happens when light fails to illuminate and instead obscures and blinds: "It must be / we are snow-blind, all / asterisks, no Anchor." Klatt goes on to imagine a Melvillian whale in unexpected surroundings: "About the whale in the guitar / case, the white whale, the blankness, & how the singsong / version of snow in which we compose ourselves has been put away, / let us levitate." Klatt's images teeter between the brilliant and the insane, summoning us to see the world and our language anew. Yet for all their bizarreness, his poems leave us haunted by quiet questions. As he concludes "Knickerbocker," a poem about a stockbroker returning from the grave to trade shares from the afterlife: "But suppose the man leaves one foot in the grave / & reaches out to us not with a foghorn / but a what if."

These what-ifs, these unanswerable questions, gain urgency from the suicides that appear in this book, from Van Gogh to the painter Mark Rothko to "the suicide of a best friend." In "Suffused," Klatt imagines the way God might suffer these wounds and questions:

to intersect a vanishing point, which is the sky
plowed under. And David Hockney says God

may be even greater than a loss of hearing, so as to
sound out the notwithstanding. Wherefore God

bleeds profusely out of the picture in light of
the void, which is the fermata of the half-ton heart.

The poem draws on the resources of both visual art—the "vanishing point"—and of music—the fermata—in its effort to "sound out the notwithstanding." Perhaps, notwithstanding the absence and wounds we experience, God may yet redeem these losses in a new perspective, a new harmony.

Thus, even while Klatt honestly mourns the wounds of our existence, many of his poems carry this eschatological hope for healing. In "Hardship," a gardener's frustration over a marauding deer causes him to hit the pest in the head with his shovel. Unexpectedly, the deer stumbles forward into the arms of the gardener, and the poet imagines the two creatures, caught in an awkward embrace, falling to the ground together. The gardener caresses the deer, yet he seems uncomfortable at this forced intimacy with his onetime enemy; he calls "out / for someone, anyone, to peel back the scalp / & inject a memory of himself as he once was, / selfish, without a bedfellow."

Yet Klatt's poems repeatedly yoke unlikely bedfellows, seeking union, or reunion, in spite of potential discomfort. Written in the form of a biblical text—with superscript verse numbers—"The Carnivores" looks forward to the day when Christ's peaceable kingdom will realize these harmonies that for now remain only dimly heard. Jesus goes to the wild beasts,

turning their appetites
into his flesh. [3]Their tongues,

reconstituted as deviled meat,
he stored under the roof of his mouth; [4]for he spoke

in parables. The hyena, caked
in blood, [5]dreamed of a wedding cake.

In Jesus's flesh, carnivorous appetites are turned; in Jesus's mouth, parables defang the violence that characterizes our existence. These parables teach even hyenas to dream of a marriage supper where the Creator will be reconciled with his creation.

It is fitting, then, that Sunshine Wound concludes with "Magnificat," a poem the title of which recalls Mary's prophetic prayer of thanksgiving for the annunciation and incarnation. Again, this poem dreams of a God who heals creation by bearing its wounds:

There is hardly anything killed/ that does not live again; the tiger/ by the scruff of its neck is borne in the mouth

of God, God/ with ultraviolet stripes that are the wounds of generations. The ice-laden/ elms, whose limbs bear the Emerald

Ash Borer, are on fire now & again because of/ sunbursts; unexpected each breath that surpasses breath; thus, enough said.

In these slashed lines, God takes on the wounds of generations. This divine suffering makes possible the poem's final image, where notwithstanding its disease, the elm catches the sunlight, reflecting it brilliantly from ice-encased branches. These poems bear witness to a God who bore the suffering of the world until he could say, "It is finished." Perhaps the void we experience is but the fermata of a half-ton heart. And perhaps Klatt's impastoed images can teach us to dream of a wedding cake that we will one day share with the Creator. Sunshine Wound is Klatt's third book, and its haunting images and rich existential questing promise that he will continue to invigorate the "dream power we are apt to forget."