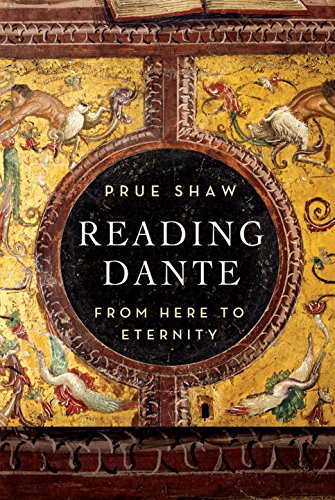 From here to eternity.
August 2014

I read The Divine Comedy for the first time as an eighth-grader. As I struggled through 99 cantos of medieval poetry, getting lost in the “dark wood” of characters, punishments, and planets, the poem couldn’t help but change me, even then. Each time I revisit Dante’s spiritual and literary journey, I’m spurred further on my own. Yet not everyone feels this way about Dante. As Prue Shaw points out in her introduction to Reading Dante: From Here to Eternity, two liberal humanists asked her why they should even bother reading him. It’s obvious that Dante’s bone-deep religious convictions make him less appealing to a post-Christian world. Shaw’s purpose in writing is to show why Dante still matters, both to readers who share his convictions and to those who do not. The message of The Divine Comedy actively combats the rampant individualism of the 21st-century, albeit in paradoxical fashion at times. Dante still matters, if for no other reason than that he shows why a life lived for oneself is futile.

This doesn’t mean, however, that Dante shirks his individuality. Rather, he grounds himself in it. The beginning of The Inferno sets Dante alone in a wood, isolated and cast off from his Florentine community. Throughout Dante’s journey, he encounters people from his past, people he knew personally as well as the famous and infamous figures of Florence, the church, and classical and biblical history. As Shaw says,

We confront the paradox that the power of Dante’s poetry comes from its strong autobiographical element—lived experience, firmly rooted in time and place and circumstance—but that this experience is transmuted and transformed by the power of the poet’s imagination and his command of language, so that often it becomes almost impossible to assert anything with confidence as a fact, except that this is a great poet writing at the height of his powers.

Dante walks through the three spheres of the afterlife while still alive, thus isolated from everyone around him. Yet he is never alone, and the poet puts great emphasis on the two guides leading him through hell, purgatory, and heaven. Virgil and Beatrice show how Dante would not have been able to make his journey alone—a lesson applicable to both the Christian life and the literary life.

Indeed, Shaw highlights Dante’s sharp command of intertextuality. The Divine Comedy avoids literary individualism by calling upon the great minds of the past. From Virgil’s own verses to the epics of Homer, from St. Peter’s founding of the church to the beginning of mankind with Adam, Shaw finds great joy in exploring the innumerable allusions in Dante’s poem. “The present does not simply follow the past. It contains the past and relates to it in meaningful ways,” she says. The poem is rooted in time, yet it also transcends time. And not only does Dante look to the past for inspiration from other writers, but also he is a source of inspiration for future writers: T.S. Eliot, Ezra Pound, Seamus Heaney, and many others. In a culture of blogs and tweets, Dante’s intertextuality should remind artists that reactive individualism does not produce great art in the way that looking back—as well as forward—can.

Written at the end of the Middle Ages, on the eve of the Renaissance, The Divine Comedy offers a corrective to our individualistic culture in other ways as well. Dante’s poem is the outpouring of a mind immersed in a medieval worldview, one that downplays the role of the individual for the glory of God. Gothic architecture and Dante’s Comedy have much in common because they share this worldview. “There is also what we might call a spatial organization of the narrative and its component parts which is reminiscent of painting or architecture,” writes Shaw. In a Gothic cathedral, the flying buttresses function to relieve the forces pressing against the wall, thus allowing high ceilings and the presence of light.

One of the most powerful moments in the Comedy occurs in Canto 3 of the Paradiso, when Dante meets Piccarda, who is placed on the lowest sphere of heaven. Dante asks her if she is content on the Sphere of the Moon, to which she replies, “His will is our peace.” This attitude of being perfectly content in the will of God suggests the highest form of individuality, as it shows how hierarchy offers freedom in individuality. The structure of the Divine Comedy reflects this, as everything is beautifully and mathematically structured in ascending hierarchy. A journey begun in confusion and darkness ends in clarity and joy.