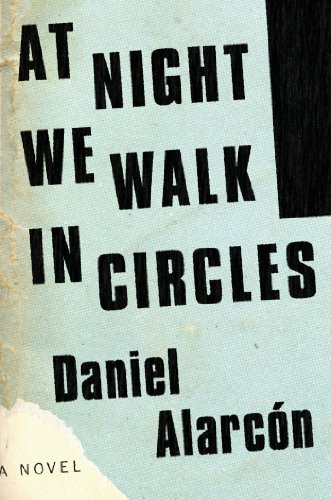 At Night We Walk in Circles

The play's the thing.

Daniel Alarcon's latest novel would have fallen into allegory if for an instant the plot appeared rigged. The story would have been soldered to the side, the characters tied up like puppets. The "moral" would have interrupted the drama. There is a point to the story that looms overhead, like a cloud suggesting something bigger, a stormy "what I'm trying to say with this story is." The point has to do with watching and performing. The story is about lovers and actors.

A canyon divides Bunyan's Pilgrim's Progress from Tolstoy's story "The Devil," made up of the difference between the generality of a "celestial city" and the particularity of a loaded pistol. At Night We Walk in Circles wavers between these two. It wavers there on purpose.

One example of how the point of the story and its persona speak in unison is the narrator, a minor character in the story. He describes things as if he were a stage director, but he isn't one. Per his character, there's no reason for how he describes light: "The entire valley was bathed in light … like an unused stage set"; "The sun hit Nelson's eyes like stage lights"; "The lights about blurred in and out of focus." He sometimes contemplates a place the way a wistful thespian would: "Everything got stranger once you rose beyond an altitude of four thousand meters, that supernatural threshold after which all life becomes theater, and all theater Beckettian. The thin air is magical. Everything you do is a riddle." The narrator works two jobs: as a character in the story, and the daimon of the story. He moves within the story, and breathes into it.

The characters are all dedicated to theater, in ways which suggest that they are dedicated to it more than to "ordinary" life. Nelson is a twentysomething actor obsessed - that is not too intense a word - with the theater group Diciembre and its leader, Henry Nunez. Henry has been recently released from prison, after 20 years or so. He had published a play, The Idiot President, with obvious political implications, at a time when political unrest needed sparks. He was convicted of terrorism. Now that he's back out, he wants to take the controversial play on tour. His dedication to the theater inspires Nelson, who auditions and gets a part. At the beginning of the tour, Henry tells Nelson not to call home but to give himself entirely to the play and his role. Nelson commits.

Nelson is not unfamiliar with imagining himself in places other than where he is - in other words, being an actor. Even offstage, he enters a role. After his brother left him to go live in America, Nelson went to bed thinking, "That could be me. Then, with a hint of bitterness: That should be me. Sometimes, just before sleeping: That is me." In an unexpected (and moving) scene, Nelson walks past a mother whose old brain is confused by the news that her eldest son might be dead. When his face hits the light, she looks up and mistakes him for her dear Rogelio. Without a twitch, Nelson replies gently: "Yes, Mama, he said. I'm here."

There is an uneasy sense that everything the characters do is performance, whether off or on the stage; the universe in which they perform is a quasi-sacred place. It is not to be disturbed. In the middle of the tour, Nelson nervously asks if Henry had been calling home. He had. "As it turned out, the only one … protecting the integrity of the play's constructed universe was Nelson. He lost his appetite."

Performance gets mixed up with life, and contradictions surface. Henry wants the theater company to travel the country, but when he has an opportunity to visit his dead lover's family, he re-routes their trip. Nelson tells his girlfriend back home, Ixta, that he loves her, but he does nothing about her sleeping regularly with another man. The narrator interviews the characters and pieces facts together, but he wants a story.

Nelson can't decide what is his role and what is his own. The world and the stage are confused. I think Hans Urs von Balthasar helps us here: "In the 'theatre of the world' the content … can only be man himself, caught between his 'I' and his role, between what he is and what he represents."

Art gives us a medium through which we can see ourselves. After looking at a sculpture, we think about the posture of those around us. With canvas we imagine color and shape. With film, we think of movement and cutting from one scene to the next. TV shows allow us to catalogue events in our life into discrete episodes. And only recently has it been so interesting to us how many people have watched this video or liked that article or tweeted that event. We are aware that whatever we do has the potential for a following.

Our life on the internet is fundamentally a life in front of (a kind of) audience. It is not a far stretch to conceive of the internet as the most elaborate stage ever constructed, with an enormous cast of mediocre actors, and competing scripts written to garner the most applause.

Where this stage ends and the world begins eludes us. Alarcon's novel mirrors our situation, hovering between reality and representation.

What is constant is the audience. Something about how today's narratives are judged according to whether they are popular or not ("please like me!") reminds us that we are interesting because many people think so, that existence is to be or not to be watched. The more time we spend in one place, off or on stage, the less time we have to spend in the other. "Let's not forget," Nelson tells the narrator, "who's stealing from whom."

Charles Carman is finishing a degree in Politics, Philosophy, and Economics at The King's College in New York City. He is a contributing writer for The Curator. In June, he will marry a poet from Minnesota.