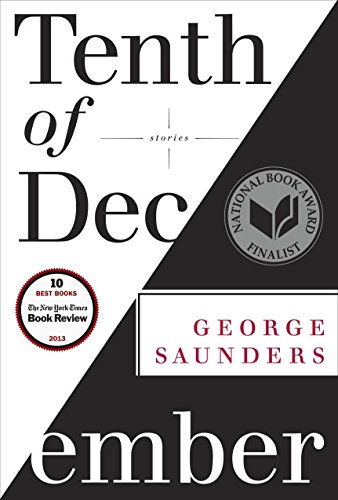 Those competing voices in your head.

No one who's read Jonathan Swift's brilliant satire A Modest Proposal forgets the shock of discovering that the proposal offered to alleviate the poverty of 18th-century Ireland is to raise children for food. The surprise is achieved, however, not by the proposal itself—people saying shocking things is hardly shocking—but by the voice of the persona Swift creates to make the proposal: a rational, concerned man-of-the-world with impeccable logic, embodying the highest values of his age. This voice draws the reader into this way of thinking until she finds herself nodding in agreement, lulled by the perfectly reasonable exposition of the argument—until it comes to its sudden, ghastly point.

This same mastery of voice, set to quite a different tune, is achieved in Tenth of December, a collection of short stories by George Saunders, which the New York Times called "the best book you'll read this year," and justifiably so. Whether employing the voice of an almost-15-year-old girl about to be abducted and almost-raped and almost-who-knows-what, or that of a "white-trash" mother who tethers her mentally challenged son to a tree to keep him safe, or that of a middle-aged, middle-class man catwalking his way toward the dull consolation prizes of a vacuous consumer-driven life, Saunders draws us in through the power and authenticity of their voices.

The winner of a MacArthur "Genius" Award, Saunders is a brat-packer in the "New Sincerity" movement, a trend within popular culture "that prioritizes the virtues of sincerity and authenticity over just about anything else," explains Jonathan D. Fitzgerald, author of a primer on the movement, Not Your Mother's Morals. New Sincerity exhibits "an observable shift away from ironic detachment and posturing and toward vulnerability and openness to ideas," Fitzgerald says. That characteristic earnestness calls for a bit of mental gymnastics to understand the place of satire—which is all about distance—in such a movement, but the work of George Saunders is a good place to start.

Satire works best within a context of mutually agreed upon standards by which deviating vices and follies are corrected by ridicule. Swift's was such an age. Ours seems, on the surface anyway, less so. But this is one of the many gifts of the New Sincerity: theirs may be "not your mother's morality," but morality is what they sincerely seek. As Saunders told the New York Times, he and his kindred spirits (which include Jonathan Franzen and the late David Foster Wallace) set out "to write stories that had some sort of moral heft." Absent the more rigid and uniform moral standards of Swift's Neoclassical period, theirs is, accordingly, a kinder and gentler satire.

But as is always the case with satire, success lies in the voice. So it is with Tenth of December. The power of these voices lends realism to stories that otherwise border on the surreal or science fiction. Yet, more than mere verisimilitude is at work. Saunders' stories embody the ideas of Russian literary critic Mikhail Bakhtin about the dialogic nature of language. Meaning, according to Bakhtin, is created by appropriating the language of others into one's own language, making context primary over text. Saunders' use of voice—regardless of the character or plot in which it is embedded—replicates the way in which the discourse that surrounds us, the metanarrative, if you will, shapes our interior monologues, our own small stories, and vice versa. The voice of each of Saunders' characters bears the imprints of the language of others, often subtly, other times more obviously, as when a character incorporates into her inner monologue the French terms or set questions she is learning in school, or the taunts of classmates, or simply the mangled spelling or usage of terms in a way that shows the character has heard certain words but does not truly know or understand the, such as "time in memorial." The voices of Saunders' characters are rife with such echoes. One might even say that the central conflict in many if not all of the stories in Tenth of December is between competing voices that shape the characters' thoughts, values, and, ultimately, their actions.

Effective use of voice is also the source of the moral correctives Saunders offers in his stories. The discursive sea in which we swim and struggle to find our own voice is also what obstructs our ability to recognize our cultural blind spots, as Saunders explained in an interview with The New Yorker: "When something really bad is going on in a culture, the average guy doesn't see it. He can't. He's average. And is surrounded by and immersed in the cant and discourse of the status quo."