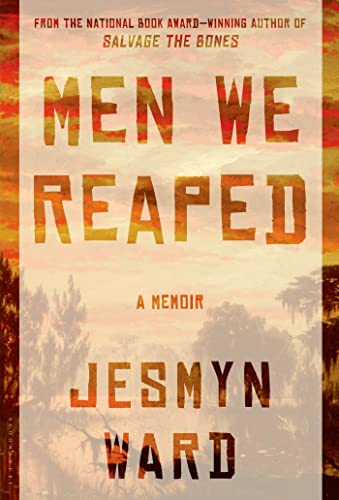 There is great social power in being the one to determine what a given event is "about." Jesmyn Ward's new memoir, Men We Reaped, debuts just a few months after the nation's attention was captured by George Zimmerman's trial for the murder of 17-year-old Trayvon Martin. As the legal process ran its course, the airwaves were flooded with competing insistencies: was this "about" guns? Was it about freedom? Was it about race?

Men We Reaped is the story of Ward's small Mississippi town and five African American men close to her who died young and violently between the years of 2000 and 2004. There were three friends: one murdered; one addicted to drugs, dead in his bed; one who committed suicide. There was her cousin, killed in a collision with a train at a defective railroad crossing no one had bothered to fix. And there was her younger brother, killed by a drunk driver on his way home from work.

Ward sets out to discover what these deaths, unrelated on the surface, were about. She finds it is a journey that begins long before these boys' lives began: "Men's bodies litter my family history." The title of the memoir is taken from the words of Harriet Tubman:

Something has killed off her friends one by one, has been killing young black men around DeLisle, Mississippi, for so long that it seems like the curse of generations. She wonders if "the young and the black had always been dying, until all that was left were children and the few old, as in war?"

In between her examinations of each man's death, Ward narrates the progression of her own childhood in DeLisle. This is the real Bois Sauvage, the fictional Mississippi town that is the setting for both of Ward's novels, Where the Line Bleeds and the National Book Award-winning Salvage the Bones. Many things are familiar; one of the most striking aspects of Ward's fiction is the breathing quality of her world: the pine trees, the sandy dirt, the hum of evening insects. It is not quite real, however. In the novels, as gritty and desperate as life may sometimes be, we see very few people die. In the memoir, Ward has no way to hold anything back.

The unfolding narrative is a story of loss of all kinds, the loss of the men she knew and the wider loss, suffered by many, of life's most important relationships. Ward chronicles a world of perpetual fatherlessness, of men who will not or cannot settle to the hands life has dealt them. Her own parents are part of this fabric: her mother, the oldest child of a single mother herself, determined not to raise her children alone, her father agreeing in principle but completely unable, in reality, to follow through, buying a motorcycle and visiting teenage girlfriends while his wife worked and fed their children, inevitably leaving and skipping out on the child support payments.

Ward sees the women of her community turn in, bear down, and grow hard with necessity. The men roam, as Ward says, "given more freedom but threatened with less freedom," if Mississippi's incarceration statistics are any indication. They work whatever jobs they can find in the depressed coastal economy; they sell drugs, they go to prison, they die.

The reverse accumulation of death in this story is potent, beginning in the summer of 2004 with her friend Roger. By the time the narrative has reached back to the fall of 2000 and the death of Ward's brother Joshua, it is almost inconceivable to think back to the beginning of the book, to the heaviness of that fifth blow after so much loss had already been sustained.

Meaning is often best made outside of chronology, and peppered through this winding switchback of memory are telling details that seem almost incidental at first. There is the specter of the justice system—the boys who go to juvenile detention for setting off firecrackers in a mailbox, the fear of gathering in a large enough numbers with loud enough music to attract attention, the county police circling the kids' dilapidated playground, waiting for a drug deal. There is the poverty—the powdered milk from WIC, the shutting factories, the unpaid child support. There is what Ward names the school system's "benign neglect" of the black male, the routine dropping out and the dearth of opportunity that follows.

Ward has discovered what all this needless death was about. Her process is an interesting exercise in transparency—she states in the prologue that there will be a chapter for each dead young man, going backward from the most recent, interspersed with the chronological narrative of her home and family. These two timelines, she tells us, will converge at the end of the book in her brother's death and hopefully provide the meaning she is looking for. A structure that might otherwise have operated unspoken for the sake of literary deftness is laid bare in the first few pages. This is perhaps because of what she has come to see her losses are about. They are about living in a world where you are less, are nothing, and that is a conclusion too stark to be left to artistic interpretation.

Catherine Hervey is a writer in Glen Ellyn, Illinois, where she lives with her husband and daughter.