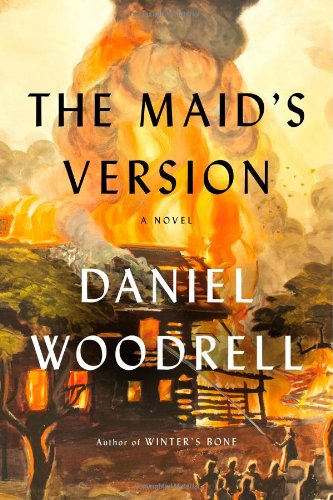 The Bruegel of the Ozarks paints an American danse macabre.

In Daniel Woodrell's new book The Maid's Version, his first novel since the publication of Winter's Bone, the people of West Table, Missouri are haunted by the Arbor Dance Hall explosion of 1929, and by the fact that the truth about the disaster never came out:

Forty-two dancers from this small corner of the Missouri Ozarks had perished in an instant, waltzing couples murdered midstep, blown toward the clouds in a pink mist chased by towering flames …

To be more precise, it was never allowed to come out. Sixty years later the book's narrator, Alek, unfolds what really happened, telling his grandmother Alma's version of the tale, the story she told him over the course of one boyhood summer.

The explosion and its cover-up radicalized Alma. Until then, she'd been an ideal domestic servant putting the needs of her employers ahead of those of her own kith and kin, keeping their secrets and even facilitating her master's secret meetings with her wayward sister Ruby, who died in the blast. After Ruby's death, something snapped inside Alma. She refused to go along with the official story.

As far as the town's leading families were concerned, no point would be served by exposing the culprit. The sheriff at the time of the explosion used to drop dark hints that he knew more than he was saying—"If I was to tell all I know about [the blast] there'd be lynchings from here to St. Louie"—but within a couple of years he was dead and the official inquiry into the disaster had reached a dead end, too. Years later, the man's son would reveal in an offhand remark just how unequal justice in Ozarks could be: "About half of what a sheriff does is to bend laws a little to keep the right people out of jail."

Lacking official answers, the people of West Table could only grieve and gossip, and they excel at both tasks. The horror touched everyone, making this a communal loss. Forced to bury the victims en masse, the survivors turned both the bomb crater and its environs into sanctified ground:

Throughout that summer human scraps and remains were discovered in gardens two streets, three streets, four streets away, kicked up in the creek by kids chasing crawdads, in deep muck at the stockyards halfway up the hill. That fall, when roof gutters were cleaned, so many horrid bits were come across that gutters became fearsome, hallowed, and homeowners let a few respectful leaks develop that winter rather than disturb the dead.

Ensuing decades made a tradition of annual vigils at the site. Remembrance brought out the crazies, of course, sparking a crop of yearly confessions to the crime as painful as they are ridiculous. There was a spate of suicides, too, survivors giving up and going to join their departed kin.

Then there were the suspects. Starting with the gypsies, over time the list came to include a wide range of local personalities. The preacher Isaiah Willard, a Hazel Motes-style purveyor of hellfire and brimstone for whom the Ten Commandments are merely "a half-hearted start," had picketed the dance hall prior to the explosion and even threatened to blow it up. Rumors swirl around Freddy Poltz, too, the Arbor Dance Hall's proprietor with a mysterious past, whose underworld connections may have had something to do with the blast. X-rays of his charred remains are passed around at upper-crust dinner parties, revealing that the former gangster was shot to death just prior to the explosion. The name of banker Arthur Glencross came up as well, the fellow who single-handedly kept the town solvent throughout the Depression. A hero of the disaster's immediate aftermath—he was said to have been badly burned rescuing survivors—the scars on his body told a tale that called the official version very much into doubt.

Glencross looms large in Alma's verson because he was both her employer and the lover of her wayward sister Ruby, who died in the explosion. A fun-loving heartbreaker, Ruby inspires animosity in other women and admiration in men—even her starstruck young nephews. "Ruby's style, her looks, her sass and vinegar gave them the urge to fight for more, more of everything they could imagine, against anybody, whenever she was near."

By the time of the dance hall tragedy, Ruby has broken off her affair with the banker, prompted by a moment of panic and selfishness that reveals what a "brute bigwig" Mr. Glencross really is. The have-nots of West Table, poor people like Ruby and Alma, "just don't mean spit" to the Glencrosses of the world, and never will. His moral cowardice opens her eyes: "There's no way to love that in a man."

Grandmother Alma passed down to the narrator not just the story but all the resentments that go along with it. Her belligerence in the face of the cover-up left her unemployed, and eventually led to a mental breakdown, after which she was committed to the Work Farm for a long spell. One of her sons died of leukemia and the others were left to fend for themselves, including Alek's father John Paul, homeless at the age of nine, who had to work odd jobs to pay his mother's keep. When Alma re-entered society, she had become an embittered firebrand: