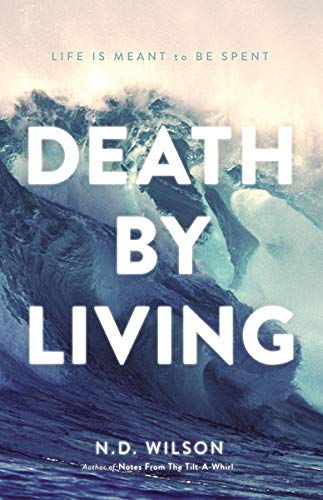 Life is meant to be spent.

Pardon me for quoting myself, but here is the way I started a book review for Christianity Today magazine in 2007: "Remember, you read it here first. N. D. Wilson (no relation, I hasten to add) is a name that will soon be widely known. He will write many books, Lord willing, in many genres for our instruction and delight. His first is Leepike Ridge (Random House)."

Six years later, and now in his mid-thirties, Wilson has already written a bunch of books, in several genres, not to mention a bit of screenwriting. His latest, Death by Living, is his second work of nonfiction and (so I think) his best book yet.

"This is a spoken world," Wilson writes—"from galaxies to inchworms, from seraphs to electrons to meter maids, every last thing was and is shaped ex nihilo. It—and we—all exist as beats and rhythms and rhymes in the cosmic and constant word art of the Creator God. To fully embrace and attempt to apply such a vision is … dizzying." The ellipses are his, and what he's attempting is not just dizzying, it's impossible—but it's worth trying, again and again, over the course of a lifetime.

Death by living? That's the fate we all share. But we can choose to be aware of what's happening, embracing it rather than hiding from the reality of our own lives. "Life is a story," Wilson says—once, twice, twenty times.

Now you may be feeling itchy at the invocation of story. Don't worry: the author is a step ahead of you: " 'Story, story, my life is a story,' says the hipster to his Twitter feed." Yes, story can be used superficially, evasively, to avoid unpalatable truths, to avoid conflict. (We're all just telling our stories, you know.) Which is funny, because you can't have a story without conflict.

So, one of the best stories in this book of good stories is Wilson's account of a 2009 family trip to Europe (Chapter 4, "Going to Hell in a Seventeen-Passenger Handbasket"). The narrative involves repeated vomiting, in public places, by two-year-old Seamus, then known as "Fatty." His spectacular displays of discomfort make the family entourage—already hard to miss in countries where the birthrate is well below replacement level—downright conspicuous. All of this is related as if by a master of gross-out comedy (it's very filmworthy), but the story also includes glimpses of an enfeebled church in what was once the heartland of the Reformation (that's comedy too, but of a much darker variety) and memories of Wilson's maternal grandfather (the lives of both of his grandfathers are woven throughout the book).

And I haven't even mentioned Chapter 8, "The (Blessed) Lash of Time," which is one of the best treatments of that elusive subject I have ever seen. If I had to pick one part of the book to give to someone as a sampler—here, taste this—it would be this chapter, which also features a magnificent excursus on atheistic scenarios of "a world that is truly and intrinsically and explosively accidental." (The riff on "nothingness" is particularly delectable.)

"The world never slows down so that we can better grasp the story," Wilson writes, "so that we can form study groups and drill each other on the recent past until we have total retention. We have exactly one second to carve a memory of that second, to sort and file and prioritize in some attempt at preservation. But then the next second has arrived, the next breeze to distract us, the next plane slicing through the sky, the next funny skip from the next funny toddler, the next squirrel fracas, and the next falling leaf."

From the ridiculous to the sublime, it's all here, never far removed from this ordinary moment of death by living: "Life is here. Life is now."

Heather, I know exactly what you mean. The relentlessness of time--when we pause to think about it--can be paralyzing, but simply ignoring it (as we're inclined to do) isn't good either.