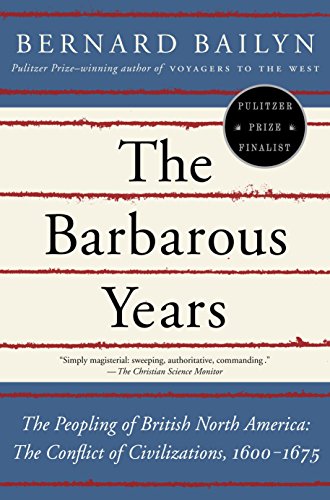 Harvard's Bernard Bailyn is arguably our most influential historian of colonial and Revolutionary America. Edmund Morgan of Yale, who recently passed away at 97, is the other contender. Both studied under Harvard's legendary Perry Miller, the greatest historian of the American Puritans. Bailyn, like Morgan, has been blessed with an extraordinary long life and career. His latest book, The Barbarous Years, appeared as he turned ninety. Who needs retirement?

Few professors can claim to have changed the study of any field. Bailyn has changed two. One is the intellectual history of the American Revolution, which he and his former student Gordon Wood reshaped with their "republican" thesis of the 1960s, led by Bailyn's Pulitzer Prize-winning Ideological Origins of the American Revolution (1967). In the 1980s, Bailyn turned to social and demographic history, with The Peopling of British North America (1986) and Voyagers to the West (1986), which also won the Pulitzer Prize. Bailyn has since focused on the colonists' broader Atlantic context, and The Barbarous Years is a fulfillment of that project.
The Barbarous Years is not ground-breaking like his Pulitzer-winning books, but it is more comprehensive, ranging across the raw edge of European settlement on the North American mainland. Life in Bailyn's early colonial era was "nasty, brutish, and short." Terroristic violence between and among Europeans and Indians was endemic.

Bailyn highlights tales of the obscure, the utopian, and the bizarre. The Mennonite visionary Pieter Plockhoy, for example, came to the evocatively named Whorekill, Delaware, in 1663, with dreams of building of an egalitarian pacifist commune. He died almost immediately under uncertain circumstances. In Bailyn's rendering of early America, Plockhoy gets as much sustained coverage as Puritan leader John Winthrop. Some will find Bailyn too negative, but he certainly corrects our nostalgia for the colonists as quaint American Patriots in waiting.

Thomas S. Kidd is professor of history at Baylor University, and the author of books including Patrick Henry: First Among Patriots.