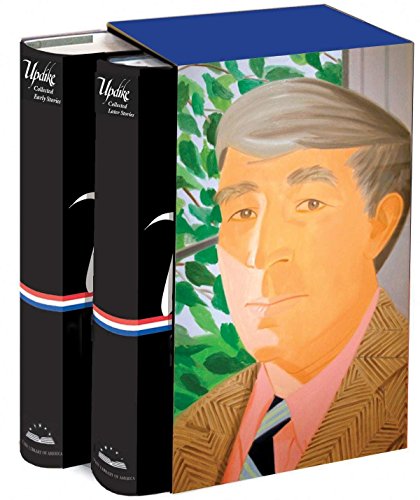 "Plato was wrong," John Updike writes toward the end of one of his short stories, "what is is absolute. Ideas pale." Updike's prose is rarely pale in the two-volume edition of his short stories recently published by the Library of America. It chases after physical objects more often than ideas, capturing a resplendent vision of creation's praise. Indeed, despite the timespan these stories cover—from 1953 to 2008—and their immersion in the changing social mores and material commonplaces of the American middle class, they astound most in the persistence of their praise. "So: be joyful" one story directly admonishes, and the rest quickly step in line. This dependable contentment renders these momentous volumes, though bound in tight cloth with a ribbon marker and sheer, crinkly pages, affectionately companionable. When Updike described a golden retriever as "endlessly amiable," "as if life were a steady hail of blessings," I reached to scratch the book behind the ears, so accustomed had I become to its own panting cheerfulness.

Such cheerfulness has irked some readers. James Wood, for one, has disparaged Updike's disingenuous theological staginess. As these stories testify, Wood is right to note the lack of gripping metaphysical debate in Updike's fiction. Belief is too secure, too confident, and—like that retriever—too creaturely to muster up the agonies of a Dostoevsky or the fierce apologetics of an O'Connor. Perhaps Updike's early loves, the benign P. G. Wodehouse and the bumptious G. K. Chesterton, loom too influential. Yet this dearth of skeptical brio is in part due to a conviction, taken from Updike's reading of Karl Barth, that the modern subject does not get to set the terms of Christian belief. For example, the early story "Dentistry and Doubt" promises to tackle the question of belief but sidesteps argument with an image of God's sovereignty over good and evil. Birds in the tree outside the dentist's window enact the drama of a fallen world being reconciled in Christ: "the wrens and the starlings, mixed indistinguishably, engaged in maneuvers that seemed essentially playful."

For one who comes to Updike looking for an existential defense of Christianity, as I did when I first read him, these stories may surprise in their essential playfulness. Though I grew up an hour east of Updike's hometown of Shillington, Pennsylvania, I did not read him until college. A professor, seeking an illustration for some classic of American literature, referred to the moment in "Pigeon Feathers" when the young David Kern lies in bed, his hands held out, palms up, praying for Christ to prove his existence by touching them. The passage invokes an existential crisis of faith. David's hopeful response to the seeming stillness, resonant in that professor's warm baritone, promised tantalizing consolation: "would not Christ's touch be infinitely gentle?"

When I went looking for the story after class, hoping to tether my ship of faith with some hard-won literary insights, I discovered instead David's visual attentiveness. Existential ideas paled beneath the story's illuminated surfaces. When David kills some pigeons roosting in the barn to placate his aging grandmother's fear for the furniture stored beneath them, Updike lavishes the pigeons' feathers with luxurious descriptors and stately pauses: "And across the surface of the infinitely adjusted yet somehow effortless mechanics of the feathers played idle designs of color, no two alike, designs executed, it seemed, in a controlled rapture, with a joy that hung level in the air above and behind him." The sentence is characteristic of Updike's style, thrilled but languorous in the "controlled rapture" of its details. Unlike many of his post-Hemingway contemporaries, Updike does not shy from piling on the adjectives. In one story a typical Updike stand-in character muses, "It is a chronic question, whether to say simply 'the sea' and trust to people's imaginations, or whether to put in the adjectives. I have had only fair luck with people's imaginations; hence tend to trust adjectives." Overindulging this trust can lead to unintended comedy, however, as when he describes a lifeguard's leg hairs as "umber anthers dusted with pollen."

Yet what shines so pervasively in his short stories is the ability to burnish everyday routines with those carefully chosen adjectives. He may not convince us with weighty theology, but he does give us a grammar for praise. When our sins harden us to God's goodness, Updike not only reminds us of it, but he surprises us with specific gifts, faithfully retrieving them for us to taste and see. In these stories, the famous chronicler of adulterous affairs (twice profiled on the cover of the magazine Time) appears less as a lascivious provocateur than as a patient archeologist, polishing each fragment of human desire for our inspection. True, several stories explore the moral failings of marriages gone awry while simultaneously celebrating infidelity's sexual pleasures. Yet this is a function of what we might call, with all due respect, Updike's shallowness. In one of the adulterous stories a man tells his lover, as he ends their affair, "For me it was wonderful to become a partner in your response to textures. Your shallowness, as my wife calls it [ … ] broke a new dimension into my hitherto inadequately superficial world." When I was recently asked if I could justify having students read Updike's sensual descriptions, I should have responded that such shallow sensuality would do them good. I should have confessed that, prior to reading Updike, mine was a hitherto inadequately superficial world.