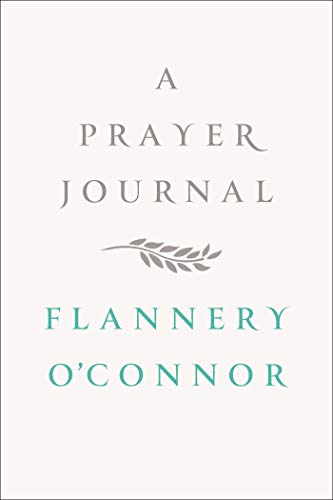 Praying and Writing with Flannery O'Connor

A book that you MUST put down.

The literary establishment hasn't given much attention to written prayers unless they originated at a safe distance of several centuries. Yet, it doesn't surprise that those written by Flannery O"Connor should attract attention and result in the publication of a book of prayers (although not quite a prayer book). Such is A Prayer Journal edited by her biographer W. A. Sessons and published in November by Farrar, Straus, and Giroux. Prior to publication, The New Yorker offered a generous selection in a September issue.

I have always been puzzled why the literary establishment (if I may risk a stereotype) should tolerate and even respect writing as religious as hers at the same time it ignores most religious writing and writing by religious persons. A few Christian believers have become sufficiently successful commercially that the numbers can't be missed. Others have crafted works of such high literary quality any fair reading would recognize their worth. Yet, they, especially evangelicals, are almost uniformly dismissed. More than being a disappointment, this profoundly frustrates me.

Of course, publishers didn't present her to the literary world with her prayers. These weren't even known until Bill Sessions found them among other papers in 2002. She had written them in a cheap spiral notebook in 1946, six years prior to the publication of her first novel, Wise Blood. At the time she was a student in the Iowa Writer's Workshop at the University of Iowa. However much she read from her Roman Catholic prayer book, hers are decidedly non-liturgical and intensely personal. She, like us, prayed she would manage to get something published. Some don't even sound like prayers, yet they evidence a spirit of prayer. Like many of the biblical psalms, she addresses God and then slips into talking to herself.

These prayers would never have been published now if she hadn't produced a wealth of other very fine literature. But, then, those other works also express her strong desire for God, although not as explicitly as these do.

Rather than nurturing parochial resentment of her success even as a religious writer, I think we all need to write better—and read Flannery O'Connor so her prose excites ours. In reading The New Yorker's excerpts, this is what happened to me. I do not mean write as well as she, but just to write excitedly and better because of what I read in her.

I had been a reader not long before I heard the test of a good book is that which you can't put down. More serious and mature reading has allowed me to recognize the worth of another kind of book, one I must put it down. I must put it down so as to look out my study window into space and think about the section that crowds my mind so I can't process it all at once. Then I must write so I can recognize what I think. After all, I don't know what I think until I read what I wrote.

Here is some of Flannery O'Connor's praying that drove me to thinking and writing. What follows each bit is what I entered into my journal as I thought about what I had just read.

Dear God, I cannot love Thee the way I want to. You are the slim crescent of a moon that I see and my self is the earth's shadow that keeps me from seeing all the moon. The crescent is very beautiful and perhaps that is all one like I am should or could see; but what I am afraid of, dear God, is that my self shadow will grow so large that it blocks the whole moon, and that I will judge myself by the shadow that is nothing.

This is heart-felt and beautiful in the way that evangelical pietism is. We start with the recognition and confession we are nothing ("such a worm as I") when we finally grasp the holiness of God. Then, in an earnest attempt to praise the Everything that God is, we seem to think we must do this by stressing and even enforcing the nothingness of ourselves. In comparison with God, we are, of course, nothing. Even looking at ourselves in-and-of-ourselves, we are nothing. But God created us to be something, not nothing. The purpose of the Incarnation and Crucifixion and whole point of the gospel are to confront us with our nothingness by showing us the Everything of God incarnate in his Son and offer the Son to us so that the Everything of God dwelling within us to make us again something. We are never Everything, but with Everything within us, he makes us something. So while we should confess our nothingness in light his God's Everything, the purpose of this confession is to become something in him, or him in us.

Dear God, About hope, I am somewhat at a loss. It is so easy to say I hope for—the tongue slides over it. I think perhaps hope can only be realized by contrasting it with despair. And I am too lazy to despair. Please don't visit me with it, dear Lord I would be so miserable. Hope, however, must be something distinct from faith. I unconsciously put it in the faith department. It must be something positive that I have never felt. It must be a positive force, else why the distinction between it and faith?