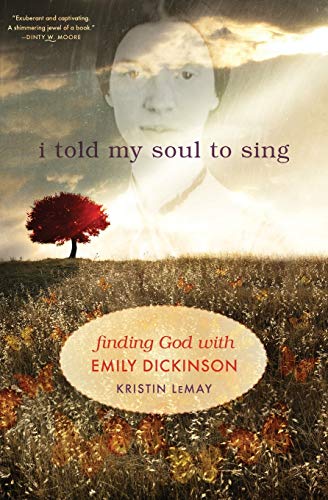 I Told My Soul to Sing

Emily Dickinson might seem an odd choice for a patron saint, but that's how Kristin LeMay paints her: "I've come to love Emily," she writes, "for exactly those qualities that might appear to disqualify her for sainthood: impiety, inconsistency, irreverence. Saint Emily, patron of all who wrestle with God." When I first read those words in LeMay's introduction to I Told My Soul to Sing: Finding God with Emily Dickinson, I was a bit nonplussed. I wrestle with God, but I'm not so big on impiety and irreverence. But as I turned the pages of this book, I came to love the Dickinson that LeMay has spent ten years reading and studying.

While LeMay makes no claim to be a Dickinson scholar, I think it's fair to say that she knows Emily Dickinson as well as any scholar does, though she approaches Dickinson differently from the way most scholars do, I think—she sees Dickinson not as a puzzle to be solved or a subject to be mastered; rather she adopts the posture of a student approaching her teacher, a disciple her master. She reads Emily Dickinson the way monks read the Bible—slowly, with care and humility and attention, as lectio divina, a form of prayer. And this is what is so appealing about LeMay's book. She writes not about "Dickinson" but about "Emily"—this poet who was first of all a person and who has, over ten years of companionship, become LeMay's friend and patron saint.

This is not to say that LeMay is squishy or sentimental in her treatment of Dickinson. Far from it. She is deeply thoughtful, and she considers many of the questions that have perplexed Dickinson scholars over the decades, focusing particular attention on Dickinson's faith (the book's subtitle, after all, is Finding God with Emily Dickinson): "[W]as she a Christian? Did she believe in God? If so, how so? If not, why not? And what did her belief consist of—if belief it was—at thirty, at forty, at fifty?" LeMay acknowledges the varied answers readers and scholars have proposed—"reluctant Christian, ardent mystic, atheist, agnostic, Buddhist"—and the "tricky evidence" offered by Dickinson's poetry (in which the I may or may not refer to Dickinson herself) and her letters (which are often cryptic or open to many interpretations). In addition, the poems and letters themselves present such contradictory "evidence" that pinning Dickinson's faith to the page is difficult at best and nearly impossible at worst:

And yet despite the challenges of Dickinson's "inconsistency on the page," LeMay makes several "confident claims" about Dickinson's interior life, including her faith.

The book is divided into five sections; each section is further divided into five chapters. In each chapter, LeMay looks in depth at one of Dickinson's poems, though she also pulls in other poems and excerpts from Dickinson's letters to deepen our understanding of the poem under focus and also to flesh out the portrait of Dickinson that LeMay is painting. The 25 poems that LeMay chooses are not the most commonly cited ones; she wants to "open a window onto Emily's life and thought that might otherwise have remained shut."

In perhaps my favorite chapter, "Doubt," LeMay looks long at "Though the great Waters deep" (F1641), whose final lines read, without irony: "No vacillating God / Ignited this Abode / To put it out." Through the lens of this poem, which Dickinson sent to at least seven different people, LeMay explores the coexistence of faith and doubt in Dickinson's life:

Did she keep writing the poem because she believed its message so fully? … It's possible. But I doubt this is the reason, since other writings from this same period brim over with assertions of skepticism and spiritual unresolved …. It's evident that the "great Waters" she evokes so calmly in this poem just as often drowned her with fear. Yet this period, dark as it was with uncertainty, also gave birth to this poem—seven copies of it …. For all her doubts, Emily looks in this poem's faithful lines toward "that Great Water in the West—/ Termed Immortality—"and shows a surprising amount of trust in the promises of faith …. The coexistence of this peaceful poem with letters of such turmoil suggests to me something true about the relationship between belief and doubt: they coexist …. Doubt and belief, Emily would be the first to say, are not necessarily in opposition. Emily judged that doubt enhances belief, since doubt's uncertainty keeps us hunting after God.

Time and again, LeMay returns to this theme, and this conclusion: that Dickinson was, like the rest of us, a complex person, and that her relationship with God was more like Jacob's difficult wrestling at Peniel than like Pilate's easy washing of his hands before Jesus. She acknowledges that "there is room for doubt about … the spiritual stances I claim for Emily in this book, [but] there is also evidence that they are true."

Much of this evidence, as LeMay lays it out, points to a woman who both believed in God and struggled with doubt, who was disinclined to conventional religiosity but who nonetheless held deep religious convictions, who wrestled in verse with the God whom she sometimes pushed away and sometimes would not let go of. In her portrait, LeMay allows Dickinson the dignity of being first of all a person—with all the complexity and contradiction that being human entails. She acknowledges and even revels in the ambiguities of Dickinson's poems and her person. In the end, LeMay finds ample evidence for "Saint Emily, patron of all who wrestle with God." And this gives her hope, because she wrestles with God, too, and she finds it consoling to know that despite all the struggles and inconsistency, Dickinson, somehow, ultimately, believed.

Because the book takes such a personal tack—LeMay's own story of faith weaves in and out of her readings of Dickinson's poems—some may say that she is reading herself into the poems, that she is seeing what she wants and hopes to see, rather than what is really there. Perhaps. But we're all postmodern here: we know the very act of observation affects the outcome. So I wonder: is Emily Dickinson a particle or a wave? Did she believe or doubt? LeMay's response would be an unequivocal Yes.

Kimberlee Conway Ireton is the author of The Circle of Seasons: Meeting God in the Church Year http://kimberleeconwayireton.net.