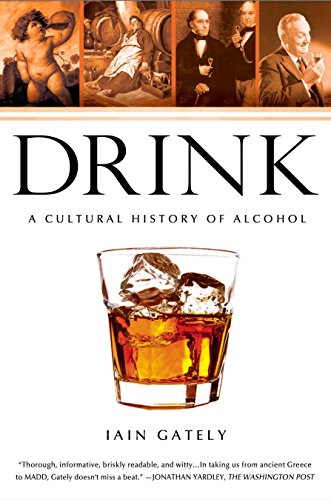 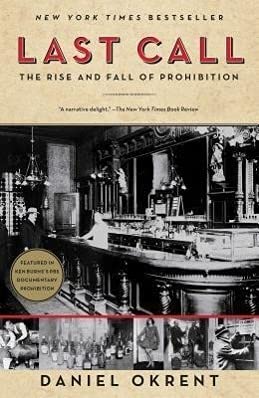 "We should not be drunken, though we may be exhilarated."
June 2013

For as long as man has been eating, he has also been drinking. And for almost as long, he has been fermenting. This is the fact that drives Iain Gately's comprehensive tome on the history of alcoholic beverages, Drink: A Cultural History, which seeks not to evaluate the moral merits of booze but to tell a sprawling narrative of its prominent role in the history of civilization.

The scope of Gately's project is wonderfully audacious: He begins with Neolithic settlements of the Fertile Crescent circa 5000 BC and ends with discussions of George W. Bush, James Frey, and Jay-Z's on-and-off relationship with Cristal. In between he makes stops at the Egyptian pyramids (reportedly built by an army of drunks), ancient Greece and Rome, the Wedding at Cana, the mead hall of Beowulf, Cistercian monasteries (the biggest wine producers in medieval Europe), the American Revolution (the rum trade helped to bring it about?), frontier saloons, Montmarte (the Impressionists loved absinthe), West Egg soirees, and much, much more. Aside from a chapter on Islam and some discussion of the drinking habits of Japan, the tale is largely a Western one (Europe and the United States), but that's not a beef as much as a necessary limitation for a book already somewhat woozy with 500+ pages of drenching wet detail.

The journey is peppered with fascinating facts and vignettes. Did you know that St. Benedict issued a ration of one pint of wine per day to the monks in his order? Or that St. Bernard of Citeaux turned the Burgundy region of France into a vast laboratory to perfect the quality of wine (so that only the very best was drunk daily in Eucharist)? Or that, for centuries, beer was widely thought to be medicinal and a good breakfast drink?

Gately's narrative is winsome and the stories as grandiose as those recounted at a wine-happy dinner party, but it's not all fun and games. From page one, Gately acknowledges the Jekyll and Hyde character of alcohol and the sometimes grim havoc it has wrought in individual lives and in whole societies throughout its history. As early as ancient Greece, writers noted the unsavory impacts of over-imbibing: poor manners, indiscretion, a spirit of anarchy. The Greeks attributed the perilous aspects of drinking to a god, Bacchus, a long-haired love child of Zeus who was somewhat untamed and, like wine, a harbinger of happiness but sometimes also misery.

Such is the dual nature of alcohol. Throughout history it has been the source of much joy, a social lubricant facilitating all manner of community, celebration and festivity. But it has simultaneously been a source of great pain, social ills, and bad decisions—a scourge to many a family. In small doses it bestows a feeling of euphoria and reduced inhibition; too much of it leads to hangovers, vomiting, overdoses, cancer, mood swings and other terrible things.

Indeed, the two-faced reality of alcohol has resulted in its persistently tenuous social meaning: contested as much as celebrated, called evil as often as toasted with cheers. Gately's book traces this dialectic faithfully, portraying alcohol's history as an almost Hegelian trajectory of constant conflict between the "wets" and the "drys," made manifest in routine clashes between the tipplers and the teetotalers and coming to a head especially in the late 19th-century temperance movements and the early 20th-century curiosity that we know as Prohibition.

As the ultimate example of alcohol's chronic divisiveness and yet unquenchable resilience, Prohibition is an episode of particular importance for any study of drink. That's why Daniel Okrent's Last Call: The Rise and Fall of Prohibition—a book every bit as vivid, witty and well researched as Gately's (albeit more narrowly focused)—is a must-read contribution to the genre.

Featured prominently in Ken Burns' 2011 PBS documentary Prohibition, Okrent's volume seeks to understand the Eighteenth Amendment and its ramifications on American society. How did a freedom-loving nation like America come to revoke a personal habit like drinking alcohol—a habit which fueled an industry that was, at the onset of Prohibition, the nation's fifth largest?

Alcohol had always been popular in America; the Puritans sailed into Massachusetts Bay in 1630 with 10,000 gallons of wine in the ship's hold and three times more beer than water. But by the mid 19th century, alcohol was so ubiquitous that the average American adult was imbibing a jaw-dropping 7 gallons of pure alcohol a year (compared to roughly 2.2 gallons per year today). The situation naturally gave rise to anti-alcohol sentiment and an increasingly passionate temperance movement.

Okrent begins his compelling narrative of America's long march to the Eighteenth Amendment in the 1840s with the Washingtonian movement, a nascent local temperance organization out of Baltimore, and from there he recounts the path to the broad coalition of organizations and activists—the Woman's Christian Temperance Union, the Anti-Saloon League (ASL), etc.—that would eventually manage to make alcohol illegal all across the land.

Looming large in the narrative are women: Christian women like "Mother" Eliza Thompson, who preached outside saloons in Ohio; Carrie Nation, who took a hatchet to barrooms and became a national celebrity; and Mary Hunt, whose "Scientific Temperance Instruction" aimed to teach the nation's schoolchildren scientifically dubious "facts" about the scary effects of alcohol (the majority of beer drinkers die of dropsy, alcohol burns off the skin as it passes down the throat, and so on). The female agitators of temperance paved the way for the suffrage movement (Susan B. Anthony and others got their start speaking out against alcohol), which would prove to be a powerful political ally in the fight for Prohibition.

Okrent masterfully weaves together the complex web of politics, religion, and personalities pivotal to getting the nation to the Volstead Act and the beginning of Prohibition on January 16, 1920. It was a curious blend of moral crusading (superstar evangelist Billy Sunday was an influential "dry" advocate), WWI-era nativism (anti-German sentiments made it easier to demonize beer companies with names like Pabst, Schlitz, Busch), and shrewd political maneuvering. The leader of the ASL, Wayne B. Wheeler, is the book's most significant player—the architect of Prohibition, perhaps the greatest example of a single-issue American reform movement that actually got what it wanted.

Well, sort of. Prohibition did outlaw alcohol and reduce American consumption a bit in the short run, but its unintended consequences would be the far more significant legacy: bootlegging, organized crime, Al Capone, J. Edgar Hoover, Elliot Ness, speakeasies, moonshine, the birth of Las Vegas, the rise of the at-home cocktail party, and a jaded political climate of bribery, blackmail, and official corruption. The 1920s are not known for Wayne Wheeler's political savvy and legislative achievement, after all; they're known for The Great Gatsby, Atlantic City, the Charleston, and a flow of liquor at parties that never seemed to run dry.

There were many problems with Prohibition, but perhaps the biggest drawback was its "all or nothing" approach, which left no room for the dignity and freedom of the individual conscience. It was a case of the government intruding on a very private sphere of personal life—what we drink for pleasure—and expecting the populace to happily oblige in a cold-turkey abandonment of an age-old social custom. Instead of working for reform and regulation in some sort of reasonable way, Prohibition was a nuance-free attempt to legislate morality on an unwieldy, impossible-to-enforce scale. Prohibition was like the overly legalistic, punishing parents who don't trust their kids to behave unless every potential vice or temptation is removed from them. It was doomed to fail.

Alcohol does little harm when enjoyed in moderation. It can be a wonderful thing. But like most good things, it can become a bad thing—for individuals, for societies—when consumed recklessly and in excess. Thus it has been contested, fought, lamented and legislated against for much of its history, by almost as many as have enjoyed its pleasures.

Gately and Okrent both come down on the wet side of the debate and at times reveal a bias against the drys (especially the Carrie Nation-type moral zealot), but neither author spends too much time discussing the area in the middle. Neither gives much attention to moderation as an important aspect of alcohol consumption, which seems a significant omission (although perhaps not germane to their documentary rather than evaluative narrative concerns).

Amid ongoing debates within Christianity about the appropriateness of alcohol—"Young, Restless Reformed" craft brew fans have revived the discussion of late—it seems to me the question of moderation has to be central. Preaching in 1539, Martin Luther said, "If you are tired and downhearted, take a drink; but this does not mean being a pig and doing nothing but gorging and swilling …. You should be moderate and sober; this means that we should not be drunken, though we may be exhilarated."

Prohibition attitudes of "not even a sip" abstinence are not wrong; they just can't be imposed on everyone. People are going to drink, and many will do so moderately, enjoying the exhilaration Luther speaks of without getting drunk. Instead of fighting to stop drinking altogether, perhaps the better campaign is to address how we drink. God created humans with the ability to exercise self-control, restraint, and moderation, after all, just as he gave us the ability to enjoy the pleasures of food and drink.

Brett McCracken is managing editor of Biola University's Biola Magazine and is the author of Hipster Christianity: When Church and Cool Collide (Baker). His new book, Gray Matters: Navigating the Space Between Liberty & License, will be published by Baker in August.