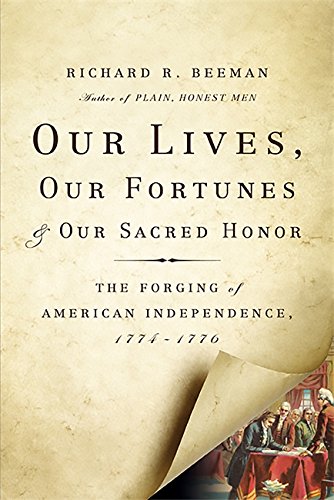 Our Lives, Our Fortunes, and Our Sacred Honor

The grand debate that led to independence.

It has been ten years since H. W. Brands complained in The Atlantic about "Founders Chic," or the unrelenting flood of adulatory works on the same set of dead white Founding Fathers. (These include Ben Franklin, of course, whom Brands lauded as "The First American" in his own 2000 biography.) Still, there seems no slowing of books on the Founders, even if recent years have seen a trend toward collective biography or narrative histories of the Revolutionary era rather than great-man biographies.

Among the best of these narratives are Pauline Maier's remarkable Ratification: The People Debate the Constitution and Maya Jasanoff's brilliant and discordant Liberty's Exiles: American Loyalists in the Revolutionary World. Into this mix comes Richard Beeman's Our Lives, Our Fortunes, and Our Sacred Honor: The Forging of American Independence, 1774-1776, which is now our best history of the Continental Congress and the grand debate that led to independence.

Beeman does highlight the usual suspects: John Adams and Thomas Jefferson are major players in his story. But Beeman gives as much space to lesser-known figures, especially Pennsylvania's John Dickinson, whom Beeman seeks to redeem from the stigma of failing to support independence. The cautious Dickinson was the "most intellectually astute and carefully modulated defender of America's constitutional liberties," Beeman contends.

Some readers may find his treatment of Dickinson too sympathetic. But we should not dismiss Dickinson and his ilk, according to Beeman; their hesitancy illustrates "the contingent nature of America's revolution." Independence was hardly a guaranteed outcome, and provoking a military conflict with the British seemed like utter foolishness to many reasonable observers.

With back-room deals and personality clashes in abundance, Beeman's tale of independence is as complex, worldly, and occasionally tedious as modern-day politics. Yet it still produced what Beeman regards as the most important document in American history: the Continental Congress's (not just Jefferson's!) Declaration of Independence.

Thomas S. Kidd is professor of history at Baylor University. He is writing a biography of George Whitefield for Yale University Press.