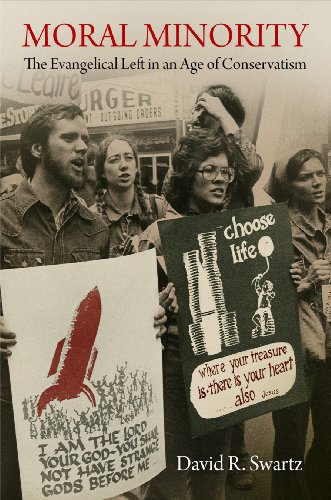 Prophets not without honor.
February 2013

"[W]e called for social and political action," Ron Sider once explained wistfully, "[and] we got eight years of Ronald Reagan."

In Moral Minority: The Evangelical Left in an Age of Conservatism, David Swartz explains how the call of Sider and other progressive evangelical activists helped catalyze a political revolution, but with consequences they did not foresee or intend.

Swartz frames his story around a 1973 Thanksgiving weekend gathering that brought together many of the men and women now considered the luminaries of progressive evangelicalism: Jim Wallis, Richard Mouw, Sharon Gallagher, John Alexander, Samuel Escobar, John Howard Yoder, and Sider. The Washington Post enthused that these evangelical activists were prepared to "launch a religious movement that could shake both political and religious life in America." The assembled delegates, Swartz informs, were "convinced evangelicalism was up for grabs."

Swartz thinks the delegates were right. In terms of political philosophies and partisan attachments, he argues, evangelicals in the early 1970s were a nascent voting bloc awaiting mobilization and direction. There was no reason to believe they would become stalwarts of the Republican Party. Indeed, in 1976, nearly 50 percent of American evangelicals cast their ballots for Jimmy Carter.

Why then did the evangelical Left fail to fulfill its political promise? Swartz points to two primary expectations. First, much like both the New Left and the Democratic Party, the evangelical Left "fragmented along gender, racial, and ideological lines." Before they could plunge into grassroots politics or seek partisan political allies, the evangelical activists at the 1973 Thanksgiving Workshop immediately found themselves at odds with each other. Black evangelicals were angered by their marginalization within the group. After the delegates circulated a draft of what became the Chicago Declaration of Social Concern, women lamented its failure to condemn sexism, and Yoder complained about the document's demurral on the issue of war. Eventually, most delegates signed a revised declaration, but the squabbles signaled what lay ahead. Barely able to agree on a set of common principles, subsequent gatherings could not agree on a practical course of action.

Second, the Democratic Party—drifting, despite its nomination of Jimmy Carter, "toward secularism and cultural libertinism"—made little space for progressive evangelicals. Here the issue of abortion was decisive. The 1976 Democratic platform recognized "the legitimacy of both pro-life and pro-choice views," and Carter himself walked a fine line between his personal opposition to abortion and his support for Roe v. Wade. The 1980 party platform, by contrast, articulated an exclusively pro-choice position, and any Democrat wanting to remain in the party's good graces had to follow suit. Ted Kennedy, John Kerry, Mario Cuomo, and Bill Clinton were among the many to revise their positions on abortion. The issue of abortion made many Democratic politicians hostile to evangelicals, even if those evangelicals were progressive on other issues. For the most part, however, the Democratic Party often simply ignored the evangelical Left.

An ardently pro-choice Democratic Party left a good number of moderate-to-progressive evangelicals in the political wilderness. The Republican Party, meanwhile, also narrowed and redefined its position on abortion, adopting an explicitly pro-life platform in 1980. More than any single factor, the emergence of the two parties' disparate stances on abortion married evangelicals to the GOP.

The evangelical Left, then, did not fulfill its political dreams. Despite the sense of promise that pervades the early chapters of Swartz's chronicle, it never really had a chance. In 1972, before the emergence of abortion as a salient political issue, four out of five evangelicals voted for Richard Nixon, who with the assistance of Billy Graham assiduously courted evangelical support. Lyndon Johnson, Jimmy Carter, and Bill Clinton—southerners all—interrupted evangelical ties to the GOP, but they could not reverse the long-term trend. Yes, had the Democratic Party made room for pro-lifers, disavowed feminism and gay rights, and remained bellicose in its anticommunism, it might have attracted more evangelicals. Swartz is, of course, correct that the political trajectory of evangelicals "was more contingent than certain," but given the events of the late 1960s and 1970s, it certainly would have taken quite a lot for the evangelical wing of the silent majority to align itself with the Democratic Party.

Nevertheless, Swartz assigns the activists in his book a theological and political influence that goes beyond such partisan realities. At a time when many evangelicals still kept partisan politics at arm's length, progressive activists "contributed to the broader politicization of evangelicalism." Yes and no. The progressives who coalesced around the Chicago Declaration may have furthered broad evangelical belief in the necessity of social and political activism, but many conservative evangelicals, including Billy Graham and Bill Bright, had already at least waded into partisan waters.

More persuasive is Swartz's assertion that the evangelical Left deserves substantial credit for the fact that young—and some not-so-young—evangelicals have embraced a variety of progressive causes. The evangelical Left, Swartz suggests, "carved out space for the rhetoric and activism of social justice—both on the left and on what became a much larger right." Many of the ideas articulated by the signers of the Chicago Declaration gained much broader adherence in the evangelicalism of the early 21st century. Even if they continue to vote Republican, large numbers of evangelicals express great concern for the environment, for efforts to fight poverty, and for racial justice. Broader cultural trends and the ideological atmosphere of American campuses also contributed to the more progressive outlook of young evangelicals, but the activists highlighted in Swartz's narrative surely helped convince some young Christians that they could be both progressive and evangelical.

Swartz mostly avoids "reading tea leaves," but he points to recent data suggesting that younger evangelicals might chart a different political course from the one embraced by their parents. At the same time, he correctly suggests that serious obstacles stand in the way of any sweeping evangelical political realignment. More likely, he hazards, evangelicals may simply grow less partisan. After four decades of political stillbirths, however, even a mere decoupling of evangelicals from the Republican Party seems unlikely. A whopping 78 percent of white evangelicals in 2012 voted for Mitt Romney (nearly the same percentage as supported Richard Nixon 40 years earlier), even though Romney was hardly evangelicals' first choice among the Republican candidates. After displaying an unusual interest in competing for evangelical votes in 2008 and even striking a somewhat more moderate tone on abortion, the Democratic Party of 2012 showed that it could cede the vast majority of white evangelical votes to the Republicans and still win.

There are several possible explanations. Despite a progressive stance on some issues, young evangelicals generally still oppose abortion. It may also be that young evangelicals simply do not vote in large numbers. It is also possible that many progressive evangelicals reach a point at which they no longer identify as evangelicals. Finally, most discussions of American evangelicalism only have white evangelicals in mind. The Democratic Party is presumably winning a much higher percentage of Latino evangelical votes, as well as the votes of theologically conservative African Americans.

At times, Swartz may overstate both the potential and the influence of the evangelical Left. Nevertheless, Moral Minority is an invaluable resource for anyone interested in the recent history of American evangelicalism. Swartz's portraits of the key figures in his book, ranging from Carl Henry's ultimately vague endorsement of social engagement to Doris Longacre's ability to make "theology in the kitchen" through the More-with-Less Cookbook, are concise and informative. The writing throughout is clear and eloquent, and Swartz takes no potshots at his subjects, regardless of their politics. One detects Swartz's admiration for progressive evangelical activists, but he neither deifies them nor demonizes their more conservative opponents. Many Americans associate evangelical Christianity with gay-bashing southern Neanderthals and hypocritical politicians and televangelists. If they read Moral Minority with an open mind, they will learn of a much richer, more intellectually vibrant and politically diverse religious movement.

The world of American evangelicalism would have been greatly impoverished—theologically and culturally—without the men and women who populate the pages of the Moral Minority. Consider this description of Ron Sider: "Into the 2000s Sider and his wife Arbutus, a family therapist, still practiced simple living. They cooked out of the More with Less cookbook, by then in its 47th printing. They purchased most of their clothes at thrift stores and maintained a modest home in a mostly black neighborhood of Philadelphia." At their best, the activists of Moral Minority were prophets who called on their fellow evangelicals to take a look beyond the comforts of their suburban American to inner-city neighborhoods, prisons, warzones, and developing-world slums. And, yes, to the world of politics, one vehicle to combat the many injustices of our world.