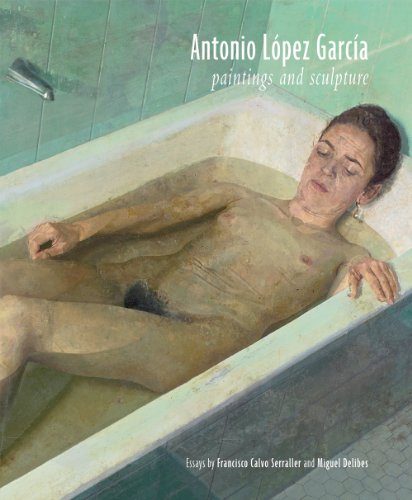 Let's face it. The world doesn't interest us much. It's just there, as a backdrop. It's visual background noise onto which we lay our own emotional tracks. We are too busy, as David Foster Wallace once put it, "ruling our little skull-sized kingdoms" to notice the way the late afternoon light hits this tree, or that brilliantly colored finch, or that toddler with his mother. Ask us what visual experiences stood out for us on any single day, and we would be hard pressed to recall anything.

And yet, for some reason, we demand that our paintings be "realistic." We demand visual imagery that conforms to our distracted recollections of what we think "reality" is, even though we spend so little time actually looking at the world around us. We want art to comfort us, to serve our needs, to add a little visual seasoning (but not too much) to the grey world in which we live out our daily lives. This is even the case for those of us who go around talking about a robust creational theology. We claim to affirm and celebrate creation, but have we ever spent five minutes looking at the stem of a rose or the deep red of a pomegranate?

We want our artists to keep us distracted by producing images that reaffirm our disenchanted, ironic, and pragmatic view of the world. Give us stuff we "know," imagery that conforms to how we already use the world. We want art to tell us we're "right." The Getty Research Center in Los Angeles has discovered that we spend an average of thirty seconds looking at a painting. Thirty seconds? For what we usually want from it, thirty seconds seems more than enough.

This is what we mean when we claim to like our art "realistic." But it's not realism. It's propaganda.

Realism is not safe. It is more radical than abstraction. It emerged in the 19th century in France with Gustave Courbet as a response to the idealism of the Academy, with its nudes and nymphs, mythologies and moralizing. Realism redirected the artist to the world, initiating the developments that led to abstraction. Art historian and evangelical statesman H. R. Rookmaaker was right to locate the demise of "Art" with the realism of Courbet. (He was wrong, I would suggest, to lament it—but that is another subject.)

Let's look at a realist.

For the Spanish painter Antonio López García (b. 1936), the world glows with the aura of enchantment and crackles with wonder. A 2011 monograph on the artist chronicles his sixty-year career, a career about which I knew little before encountering this beautifully illustrated and informative publication. López García's work is not well known outside Spain, and progressive critics have too easily dismissed it as "academic." Although he is deeply concerned with preserving technique and craft, he is not an academic, an idealist. His life has been singularly devoted to grappling with nature, with what he sees of the world around him. But he is concerned not merely with what he sees but with what he feels when he sees.

López García was born in Tomelloso, Ciudad Real, in central Spain, a part of the plain of La Mancha made famous by Cervantes in Don Quixote. He moved to Madrid in 1949 to study at the Escuela de Bellas Artes de San Fernando, which he completed in 1955. He had his first solo exhibition in Madrid in 1957 and soon became the leader of the Madrid Realists, a group of artists who sought to revitalize academic painting and figuration. In the 1960s, his reputation began to grow outside Spain. He had two exhibitions at New York's Staempfli Gallery (1965, 1968), and in 1972 he had a solo exhibition at the Claude Bernard Gallery in Paris. Marlborough Gallery, which has represented the artist since 1970, staged two exhibitions in 1986, one in New York and another in London, which further broadened the reach of his work. The Museo Nacional Centro de Arte Reina Sofia in Madrid, one of the most important museums in Spain, organized an ambitious retrospective exhibition of his paintings, drawings, sculpture, and bas-reliefs in 1993.

In 2006, López García was awarded the Velázquez Art Award, Spain's highest cultural honor. Two years later, the Museum of Fine Arts in Boston hosted a solo exhibition of his work. In the summer of 2011, the Museo Thyssen-Bornemisza in Madrid organized a retrospective exhibition, establishing him, along with abstract sculpture Eduardo Chillida and abstract painter Antoni Tàpies, as one of the most important Spanish artists of the postwar generation.

López García paints portraits, landscapes, and still lifes, focusing on the humble environs of the periphery of Madrid, where the "old way" lingers. To many in the art-world, raised on the immediate rush and shocking jolt of the avant-garde, his quiet, painstaking works appear naïve and old-fashioned, irrelevant to the demands of contemporary life. And viewed among the stuffed sharks, stainless-steel bunny rabbits, and Japanese anime that feature so prominently in contemporary art, López García is an anachronism, an aesthetic Don Quixote, an artist who still believes that painting is magical, mysterious, and perhaps even a little heroic.

Two great predecessors who have been helpful in López García's quest are the Italian Renaissance painter Piero della Francesca (1415-1492) and the Spanish Baroque painter Diego Velázquez (1599-1660). As a student, López García admired and came to emulate Piero's monumental stillness, the quiet, geometric, and even sculptural nature of his compositions. But it was in Italy in 1955 that he discovered the simplicity and grace of Spanish art, especially that of Velázquez.

A painter does not paint what he knows but paints in order to know, to discover something about himself and the world. For López García, the process of painting is a struggle, a knock-down drag-out brawl with the world, which refuses to yield its secrets, or give a blessing, too easily. He is notorious for working methodically and meticulously, which has limited his production and consequently the opportunities he has had to show his work, averaging only around two solo exhibitions per decade. In an art world in which artists generate multiple exhibitions each year and whose studios resemble factories, it is refreshing that he approaches the production of each artifact, whether a painting or sculpture, with an almost sacramental focus and care.

For most of us, the world is no longer a cause of fascination, of sustained contemplation and reflection. A bird is just a bird, a vase of flowers just that, and the grace of this man or the charm of that woman is buried beneath a multitude of judgments we make about them as they pass us. This is the "real world," the world in which as Cervantes writes, an inn is just an inn.

But López García paints the inn as if it were a castle, investing such prosaic, overlooked, and insignificant subjects as a bowl of fruit, dirty laundry soaking in a pan, a bathroom, a skinned rabbit, a refrigerator, and a woman in a bathtub with a dignity that is, quite frankly, disturbing. López García makes paintings that are the result of his struggle with objects and experiences we rarely ever notice, much less take seriously as worth our visual recognition and contemplation.

One of the more remarkable and stubbornly beautiful and seductive objects in the world for López García is the quince tree in his backyard. For decades he has tried to paint this simple tree as it absorbs and refracts the sunlight. In 1992 filmmaker, Victor Erice was given unique access to the artist's world to make the award-winning documentary El Sol del Membrillo (The Quince Tree of the Sun). The film tells the story of López García's approach to art through his relationship with this little tree, which he feels the urge to paint every autumn. And yet every autumn it thwarts his attempt to capture his experience of it. To watch the artist around this tree offers a rare and revealing insight into the mystery of artistic practice, of smearing paint on a scrap of canvas, and the naïve yet powerfully sophisticated attention of a man fascinated with creation.

Realism discloses the awe-inspiring beauty and the heart-breaking brokenness in the world. Those who want art only to make them feel good about their beliefs and distract them from the pressures of the day shouldn't ask for realism. And under no circumstances should they look at the painting and sculpture of Antonio López García.