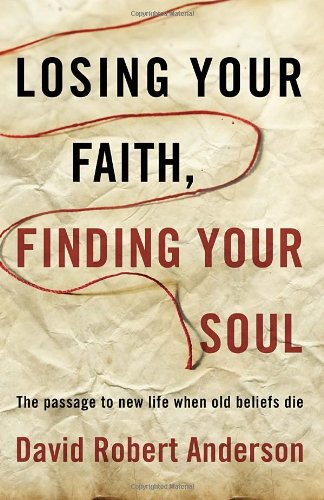 As I look back on the pile of books I read in 2013, a number of them seem to fall into a new genre. "Christian hip," I'll call it. Move over John Stott, Chuck Colson, and Max Lucado. These books circle around faith matters in a decidedly non-traditional way. Many of the authors came out of a strict evangelical or fundamentalist background, and they write about their spiritual detours in a loose, memoir-type style with a few obligatory bad words sprinkled in.

Two publishers have devoted an entire line of books to this new genre: Jericho Books by Hachette/Faith Words and Convergent Books by Crown/Penguin/Random House. (In this day of corporate mergers, publishers have multiple names, like royalty.) I tend to give their books the exercise machine test. If they hold my interest for thirty minutes on an exercise bike or elliptical machine, I'll read them more carefully later. The following passed that test.

Losing Your Faith, Finding Your Soul by David Robert Anderson was the most rewarding discovery, and I marked it up heavily. An Episcopal minister in Connecticut, Anderson has been on a journey toward an honest faith that may rattle some evangelicals but comfort many others. His well-researched book includes some lovely stories and juicy quotes, such as, "The comedian Cathy Ladman was not far wrong when she remarked, 'All religions are the same: religion is basically guilt with different holidays.' "

The Invisible Girls by Sarah Thebarge ranks as my personal favorite in this genre. At age 27, Sarah Thebarge had life in her pocket, with a boyfriend, an Ivy League degree, and a good job. Breast cancer, a cross-country move, and a painful breakup changed all that, and yet her own travails are not the main focus of the book—a family of Somali refugees is. What happens next in her beautifully told story proves the truth of Jesus' statement that we find our lives by giving them away.

Speaking of giving away your life, Jonathan Wilson-Hartgrove makes that a career. Along with Shane Claiborne, he founded the New Monastic movement. He and his wife Leah live in a Christian community that opens its door wide to any straggler. What would happen if we took literally Jesus' command to "Give to everyone who asks"? Strangers at My Door gives the answer, in a way that inspires the reader toward hospitality rather than guilt.

Addie Zierman's When We Were on Fire is a model of the raised-Christian-then-left-the-church-and-maybe-the-faith-then-warily-climbed-back memoir. She pulls it off. Here's a sample: "Some of us searched longer than others, but in the end we faded out. We were looking for Jesus. Instead we found programs, guilt, and awkward small talk. We found fog machines and Five-Simple-Steps-to-Spiritual-Growth and fill-in-the-blank Bible studies. So we started sleeping in on Sunday mornings. We went to the farmers market and bought good things straight from the earth. We drank our morning coffee at small café tables outside, and people walked by with their dogs at a slow, Sunday-morning pace. It felt more like rest to us than those chaotic church mornings, when we moved through the loud small talk of the church foyer and felt invisible."

Pastrix, by Nadia Bolz-Weber, covers similar terrain on steroids. Tattooed like a motorcycle mama, potty-mouthed, an in-your-face standup comic, Nadia surprised everyone—especially herself—by becoming a Lutheran minister and founding The Church for All Sinners and Saints in my home city of Denver. Her style may be off-putting to some, but underneath she writes with passion about a contentful faith. I think of her as a sheep in wolf's clothing.

Some of these books center on a particular issue. Sober Mercies, by Heather Kopp, gives a harrowing account of a committed Christian, herself an author and married to a Christian publishing executive, who has a secret life as an alcoholic. Torn, by Justin Lee, brings both poignancy and compassion to the church's ongoing conversation about homosexuality. Mixed-Up Love, by Jon Sweeney and Michal Woll, tells what happens when a kid from a blue-blood evangelical family becomes Catholic and marries a Reconstructionist rabbi. Holly Burkhalter's Good God, Lousy World & Me explores the age-old question of a loving God and a world of evil through the lens of the International Justice Mission, an organization that responds not by philosophizing but by advocacy and activism.

Other books give a kind of apologetic for the church. In When "Spiritual But Not Religious" Is Not Enough, Lillian Daniel makes a strong case for faith not being a solitary undertaking. Rob Strong, who lives in Massachusetts, "the least churched state in the USA," tries in The Big Guy Upstairs to explain faith to those who would not understand Christian lingo.

And just so you know I haven't been paid by publishers to hawk their books, I'll say that not all hip Christian books keep me reading. I couldn't make it through Rob Bell's Love Wins because I found the staccato, one-sentence paragraphs grating. The syntax got in the way of the content; I felt more like I was reading a catalog than a book. (However, I found Bell's latest, What We Talk About When We Talk About God, refreshing and stimulating.) For the same reason, I couldn't relate to a couple of books by Jay Bakker, son of Jim and Tammy Faye. My hipster tolerance has its limits.

One last mention: A bright literary light in the U.K., Francis Spufford, caused a stir with Unapologetic: Why, Despite Everything, Christianity Can Still Make Surprising Emotional Sense. Great Britain is much further down the post-Christian path than the U.S., and Spufford makes his points by appealing to life experiences rather than theological ideas. To almost everyone's surprise, he ends up fairly orthodox—though with a lot of bad words thrown in. That seems to be the essential ingredient in hipsterism.

Philip Yancey's latest book is The Question That Never Goes Away (Zondervan).