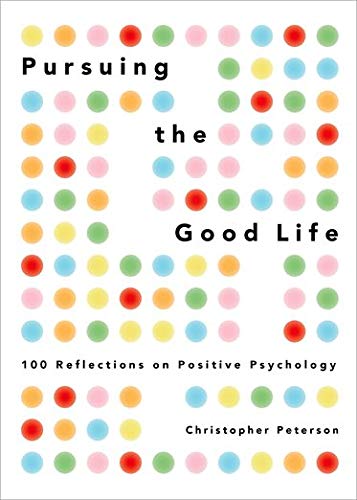 Christopher Peterson's Pursuing the Good Life: 100 Reflections on Positive Psychology consists of bite-sized reflections on those characteristic psychological features of people you might describe as happy or satisfied or otherwise favorably disposed to life and the world. The majority of these pieces, which are gathered under eleven headings—ranging from "Positive Psychology and the Good Life" to "Positive Emotions and Experiences" and "Positive Relationships," and ending with "Pursuing the Good Life"—first appeared on the author's positive psychology blog, The Good Life. They appear in this volume "updated and revised."

Sadly, Christopher Peterson did not live to see its publication; the world lost a major contributor to and co-founder of the positive psychology movement when Peterson passed unexpectedly in October, just two months before the book's release.

There is much to like about this easy-to-read volume. Perhaps the biggest drawback is that, to my reckoning, we don't really learn anything about the "good life." Like nearly all authors in this genre that I have come across, Peterson treats "happiness," "positive emotions" and "the good life" as synonyms and uses them more or less interchangeably. Yet it's pretty easy to show that positive emotions, happiness, and the good life are not the same. But, we'll come back to that. Let's first look at a few examples of some of the interesting and illuminating material on positive emotions and happiness that make up the volume.

What people like Chris Peterson, Martin Seligman, Ed Diener, and others have been up to for roughly the past twenty years is using research psychology to reveal interesting features of human happiness. Among the things the psychological research has revealed, Peterson shares with us in the first chapter, is that "happiness leads to desirable outcomes at school and work, to fulfilling social relationships, and even to good health and long life." We also learn:

It would do the reader good simply to sit with and dwell on much of what Peterson calls to our attention in these 100 brief reflections. For example, in the second reflection, "Parsing Positive Psychology," Peterson points out a characteristic feature of the happy person often either overlooked or downplayed by the ordinary run of adults, namely, play. Happy people are playful people. "What makes life worth living is not a psychological process. It is work, love and play."

Peterson references a study of 114 photographs from a late 1950s women's-college yearbook. Researchers studied the faces of the women pictured. All but a few were smiling, but of those who were smiling, only some showed evidence of what is called a "Duchenne" smile (named after Guillaume Duchenne, a French physician who discovered that smiles indicative of joy and happiness engage muscles around the eyes as well as those around the corners of the mouth; fake or forced smiles do not produce crinkles around your eyes like involuntary or Duchenne smiles do). Decades after the yearbook photos, researchers could predict which of the women were married and, of those, which were satisfied with their marriage. And yes, you guessed it: those who were both married and happy wore a Duchenne smile in their yearbook picture. Moreover, another study, this time of photographs of major league baseball players from the 1952 season, showed that those players who did not smile at all lived, on average, 72 years. Those who showed evidence of Duchenne smiles lived, on average, 80 years. Now, the claim is not that Duchenne smiling causes you to live longer. The claim is that a genuine Duchenne smile is an indicator of happiness and, apparently, longevity.

Yet another study Peterson shares concerns the effect of our happiness on others and theirs on us. It turns out, according to this study, that a happy person with whom we are socially linked increases our own sense of happiness by 9 percent, while an unhappy individual with whom one we're connected decreases our own happiness by 7 percent. So happiness appears to be a bit more powerful than unhappiness.

Christopher Peterson is said to have begun every course as a professor with the words, other people matter. And, from what I've read, this three-word phrase was often repeated throughout his lectures. Of course, there is a good deal of research to back up the claim that others matter to our own happiness and sense of well-being. One study, for example, that Peterson points to shows that living happily ever after involves having an emotionally stable (non-neurotic) marital partner, prioritizing altruistic/family goals, attending church, and balancing work and play.