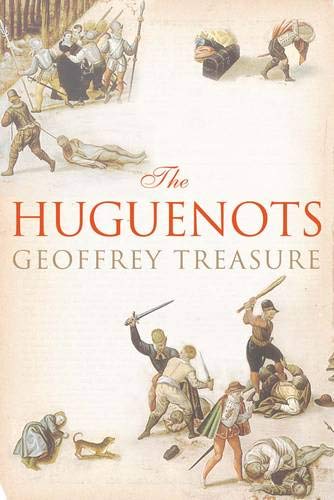 Francois Dubois' gruesome painting of the Saint Bartholomew's Day Massacre in 1572 forever memorialized the brutality of the day. The painting depicts Catholic Parisians hunting in packs for their Protestant countrymen, hanging them from posts, bludgeoning them with clubs, and decapitating them in the city streets. At the center of this macabre scene are two political figures: Catherine de Medici, the Catholic mother of King Henri III, who casually inspects the slaughter of Protestants; and the dead body of Admiral Coligny, the Huguenot military leader whose assassination ignited the massacre.

In much of the English-speaking world, the Reformation in France is relatively unknown. The Affair of the Placards, Saint Bartholomew's Day, the Edict of Nantes, and Cardinal Richelieu's wars against the Huguenots are typical highlights. However, the history behind these highlights is overshadowed by events in England and Germany, and even recent, large-scale histories of the Huguenots, though worthwhile works of scholarship, tend to focus on refugee experiences or Huguenot culture after the revocation of Nantes in 1685 (see for example Anne Dunan-Page's The Religious Culture of the Huguenots: 1660—1750). The unintended effect has been an oversimplified view of the French Reformation, portraying French Protestantism being oppressed and martyred by a merciless and bloodthirsty urban mob and royal court.

Geoffrey Treasure's The Huguenots is a welcome challenge to such oversimplifications. Written as a political history about religion, rather than a church history, the book seeks a middle ground between the affairs of the church and those of the state, treating them on equal terms. For Treasure, the Huguenots were not merely another manifestation of Protestantism; rather, they were unique to early modern France, which both kept Huguenotism alive in France for over a century and led to its demise.

16th-century France, as Treasure describes it, was a country of contradictions. It was the seat of absolutist theories of government, but it was also a "distinctively mediaeval" society, with powerful nobility that could and did threaten the monarchy. The University of Paris was a bulwark of Catholic orthodoxy, but France was also the soul of the humanist movement in northern Europe. After Spain, France was considered to be the most Catholic nation in Europe; however, the distinctly Gallican nature of French Catholicism could clash with the wishes of the pope in Rome when French political interests were at odds with theological conformity.

These contradictions created an unstable political milieu that nourished the Huguenot heresy and sparked the civil wars (or wars of religion) in the second half of the 16th century. For Treasure, these years of bloodshed and violence solidified the Huguenots' claim to a rebellious "separate state," which was "linked overtly to other Protestant powers." This alternative Huguenot state received its theology from John Calvin in Geneva, "the first port of call" for French pastors. Their local governments in cities like Montpellier and La Rochelle were characterized by a system of synods and colloquies. They even had a ring of "warrior nobles," like Henri de Rohan and Admiral Coligny, to mobilize a military force. In other words, the Huguenots felt and "looked like outsiders" to the rest of Catholic France.

The Huguenots shines as a work of scholarship when it is teasing out the complex tension between religious tolerance and persecution generated by the creation of this distinctive subculture. Ultimately, this tension is the main undercurrent of the book. Although, as Treasure acknowledges, "French Protestants were persecuted from the start," he demonstrates that there was a continued emphasis on toleration, in order to either end or stave off civil war. Henry IV's Edict of Nantes in 1598, which granted freedom of worship and has been celebrated as a remarkable statement of religious liberties, actually marked the culmination of a long line of official efforts.

Interestingly, along with Catholic leaders like the humanist Bishop Briçonnet and the chancellor Michel de l'Hôpital, Treasure identifies Catherine d'Medici as one of the leading advocates of tolerance. Far from the murderous queen-mother that Dubois and other Protestant historians have depicted, Treasure's Catherine is a sympathetic character, "sitting uncomfortably between the Guise and Coligny." She was bent on keeping France united under the reign of her sons and avoiding the radicalism of either religious party. To do this, she championed several pieces of tolerance legislation, including the Edict of Saint-Germain in 1562, granting freedom of conscience to Protestants. It was only when Catherine thought Coligny and the Huguenots threatened the monarchy's stability that she turned to assassination, which Treasure labels "an aberration" for her character "and a calamitous misjudgment."

Sadly, efforts at tolerance simultaneously fueled religious animosity. Shortly after the passing of the Edict of Saint-Germain, the civil wars were ignited by the Guise family—that notoriously militant Catholic clan—who massacred Huguenots in the town of Wassy. Elsewhere, when the state would not persecute Huguenots, the people often felt obliged to take matters into their own hands, with forced conversions, attacks on Protestant gatherings, and assaults on those who would not pay reverence to religious images. Also, the St. Bartholomew's Massacre was partly a response to the treaty between Catholics and Protestants ending the third civil war in 1570. Treasure reminds his readers that particularly in "Paris, the people saw Huguenots returning to the city … [and] were in no mood to tolerate them." Even the Edict of Nantes did not quench persecution entirely, as local institutions (universities, town councils, etc.) still remained largely prejudiced against Protestants.

And yet French society slowly, oftentimes begrudgingly, accepted the Huguenot presence. During much of the 17th century, Huguenots like Theodore de Mayerne (Henry IV's physician) began occupying key positions in France. Wealthy Huguenots hired leading architects to build Protestant temples for public worship. "Artists, engravers … printers, paper-makers … painters, glassmakers … merchants, bankers, and entrepreneurs"—all were vocations Huguenots gravitated toward. Treasure summarizes this period as one that "for the majority of Huguenots" was characterized by "normality." Even after Cardinal Richelieu conquered the Huguenot stronghold of La Rochelle, the French throne never attempted to revoke the Edict of Nantes.

Unfortunately, this normality did not last. Bringing his history to a close, Treasure marvels at Louis XIV's miscalculation in revoking the Edict of Nantes. Treasure's final chapters set out the various motivations behind the revocation. Drunk with the philosophy of absolutism, convinced it was his responsibility to reunite the French religion, blind to domestic and international realities (what Treasure calls "the Versailles effect"), and swayed by wishful reports "that the morale of the Huguenots had plummeted," Louis believed the revocation was a fait accompli.

In reality, the revocation chased hundreds of thousands of Huguenots into exile, many of whom represented a significant minority of French skilled workers and professionals. This labor force—like the master watchmakers who established a new trade in Geneva—would benefit the economies and cultures of Switzerland, the Netherlands, Germany, England, and North America for generations to come.

Some readers will accuse Treasure of a turgid and dry style, and this complaint wouldn't be entirely unjustified. Others may expect a greater amount of historical pontificating, speculating, and drawing of contemporary parallels with such a hot-button subject as religious violence. In an age when history is often twisted by partisan ideologies, Treasure thankfully writes with careful objectivity, delivering a rich distillation of French history.

In Notes Towards the Definition of Culture, T. S. Eliot commented "that no culture can appear or develop except in relation to a religion." The Huguenots illustrates how the opposite is equally true, that no religion can appear except in relation to a culture. The Reformation in France and across Europe was about more than religious change. As the new French religion emerged, so too did new constructions of French culture and nationhood, which were defined by what it meant to be a Huguenot.

David J. Davis is director of the Master of Liberal Arts and assistant professor in history at Houston Baptist University.