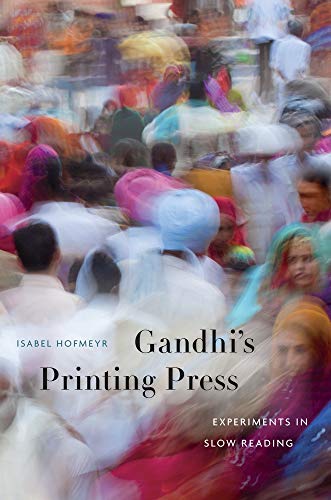 A surprising story of slow reading—with lessons for the church today.

With the emergence of the Slow Food movement, as well as Slow Money, Slow Cities, and a host of other counterculturally Slow ventures over the last three decades, one might be tempted to assume that such opposition to a culture of speed is a relatively new historical development. The industrial age, however, has since its origins been marked by individuals and groups who have adamantly voiced their opposition to the overweening rise of speed and technology. Journalist Nicols Cox has traced this history in her 2004 book, Against the Machine: The Hidden Luddite Tradition in Literature, Art, and Individual Lives. One important figure who receives only brief mention in Cox's book is Mohandas Gandhi. In Gandhi's Printing Press: Experiments in Slow Reading, Isabel Hofmeyr recounts a little-known aspect of Gandhi's story that will undoubtedly serve to raise his historical profile as an opponent of fast, industrial culture. Gandhi's Printing Press is, among other things, a monograph in the history and culture of the book, and there are parts of it that do get a bit technical, but a deeper narrative flowing through the work particularly caught my interest, one centered around questions about the practices through which a faith community can resist, or be liberated from, the powers of speed.

Not long after finishing his law degree in London, Gandhi emigrated to South Africa, where he spent more than twenty years (1893-1914). The nonviolent tactics of satyagraha that he would later advocate in leading the Indian people in resistance to the British empire were honed in these early years. Specifically, Gandhi gained renown for leading a campaign to resist the government-mandated registration of Asians that lasted from 1906 to 1914.

It was in the midst of this nonviolent resistance movement that the International Printing Press (IPP) was born at the behest of Gandhi, and with Viyavarik Madanjit as its proprietor. The press was founded to serve and unite the expatriate Indian community in South Africa. In Mandanjit's words: "We have all believed a printing press to be a necessity among us. No civilized community can do without it." Hofmeyr emphasizes that a driving force behind the publishing efforts of the IPP was Gandhi's radical framing of a hierarchy that put Truth (satyagraha) first, then India, and finally Empire. This hierarchy served as a means to form the identity of ex-pat Indians: first into the countercultural way of satyagraha and then into the national identity of India. Working within this Gandhian philosophy, the printing press in its earliest years printed pamphlets and sustained itself by contracting to print odd jobs. In 1903, the press launched a newspaper, Indian Opinion, which was published in several of the primary languages of the Indian sub-continent, and served as a catalyst in organizing and mobilizing the Indian community in South Africa.

Hofmeyr argues that the IPP, and particularly the Indian Opinion and its pamphlet publications, provided an important tool with which Gandhi could experiment with the identity formation of a particular community. She notes that the work of the IPP unfolded within the multi-layered "entanglements" of empire in South Africa at the dawn of the 20th century:

[The IPP] drew its personnel from southern Africa, the Indian Ocean world, and England, and it sought to address an audience spread across Africa, India, and Britain …. If the medley of diasporic communities resulted in varied printing personnel, then this disparateness provided the basis for trying out new forms of community.

These "new forms of community"—and the distinctive role of reading in their formation—captured my imagination as I read Hofmeyr's work.

In its heyday (1903-1914), the IPP published roughly 30 pamphlets, the content of which was mostly drawn from the Indian Opinion. These pamphlets were central to Gandhi's vision and to the work of the press. Hofmeyr observes that "the paper was envisaged as serving the pamphlets rather than vice versa." It is not surprising, then, that these pamphlets "have become one of the paper's most enduring legacies." Except for the most famous of these pamphlets, Gandhi's Hind Swaraj, they consisted not of original writings but rather of translations, reviews, abridgements, and retellings. The pamphlets covered diverse subjects, all connected in some way to the central themes of satyagraha: resistance, courage, and nonviolence. Gandhi also attempted to cater to the Muslim readers who comprised a large percentage of his audience, by publishing pamphlets that were relevant to their faith. While they were issued in the pamphlet format, Gandhi envisioned that these works could be bound together into books, giving them a permanence rarely afforded to pamphlets.