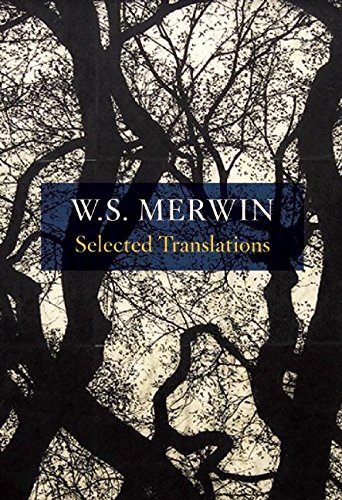 "As close as possible to the original."

It's fitting that one of America's greatest translators of poetry should have been inspired by one of the world's most poetic translations. W. S. Merwin's father was a Presbyterian minister who had, as Merwin puts it in the forward to his Selected Translations, a merely "rhetorical" interest in language, "a love of the sound of language [ … ] more or less apart from the meaning." One Saturday, the younger Merwin was listening to his father rehearse his Sunday sermon when he read the following passage in Isaiah from the King James Version of the Bible:

In the year that King Uz-ziah died I saw also the Lord sitting
upon a throne high and lifted up and his train filled the
temple.
Above it stood the seraphim; each one had six wings; with
twain he covered his face, and with twain he covered his
feet,

"I did not remember," Merwin writes, "ever having heard language like that, and it rang in my ears."

That moment would shape Merwin's life. (One wonders what Merwin would have become had his father loved the doctrine of the Bible as much as its music.) In due course he headed for Princeton, studied writing and Romance languages, and bought copies of Wallace Stevens' books of poetry at Parnassus Book Shop on Nassaut Street. At nineteen, while visiting a friend in Washington, D.C., Merwin met the enigmatic Ezra Pound in Saint Elizabeths Hospital. Pound told Merwin to "get languages and translate"—in fact, he had already begun to translate at Princeton—and encouraged him in particular to "Get the romancero. Those poems, the oldest ones, are closest to the source. But best of all is the Provencal. Try to get the Provencal. Those troubadours wrote closest to the music."

As Selected Translations shows, Merwin mostly took Pound's advice to heart. While there are few poems in Occitan, there are ballads or lyrics from every European language, Latin, Greek, Chinese, Russian, Crow, Turkish, Sanskrit, Urdu, and many others. Some of these poems were translated with the assistance of other translators, and some were adapted from previous translations, but Merwin's linguistic breadth is no less impressive for that.

Even more impressive, though, is Merwin's ear. The range of the volume is stunning. It spans fifty years of book-worming and more formal translation projects, guided mostly by Merwin's whim and judgment. The result is a hodgepodge of some of the best, though often lesser-known lyrics from Liu Ch'e to Federico Garcia Lorca, rendered in vibrant American English. My favorites—but how can I choose?—are his Russian, French, and the occasional Swedish poems. We have this, for example, from Osip Mandlestam:

Calamity, my great laborer,
Sit down, Calamity,
Take it easy,
Let's take it easy for a minute, both of us,
Easy.
You find me, you get the hang of me, you try me out,
I'm the ruin of you.

My big theater, my harbor, my hearth,
My golden cave,
My future, my real mother, my horizon,
In your light, in your great spaces, in your horror,
I let myself go.

As even this limited and somewhat random selection shows, these are not poems for sensitive souls considering suicide—unless, of course, they are looking to glut melancholy, as Keats suggested. Death, loneliness, exile are the most common topics, though there are a handful of lighter poems.

Merwin's selections come as no surprise. For him, poetry is a testament of universal human suffering. And it is suffering, coupled with empathy for our fellow wounded, that makes us human, according to Merwin. If poetry and art in general can offer opportunities of catharsis, they can only do so by first reminding us of the pain that constitutes our lives, making a complete purging impossible. The best we can hope for from poetry, in this understanding, is a temporary sense of community. As Merwin writes in the early poem, "The Way to the River," our sole consolation in life is that "we / Will read it together."

Like all translators, particularly those of poetry, Merwin has had to deal with the thorny issue of commensurability—the question of what counts as an accurate translation of an original poem, which, of course, may have a sound or a meter irreproducible in the target language, or one that, if reproduced, sounds dead or off. Pound, who was famously free in his translations, told Merwin "to get as close as possible to the original." For his part, Merwin is a gifted and pragmatic translator. He avoids lifeless, literal translations, but at the same time generally stays as close to the denotative and connotative meaning of the words of the original as possible.