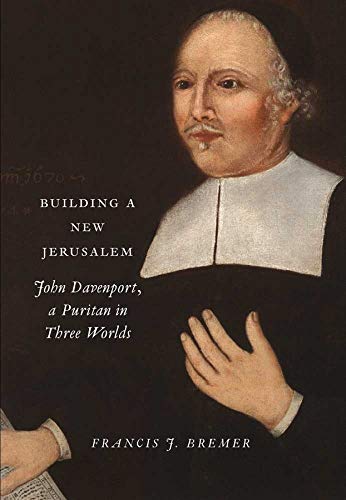 The future United States was not on the Puritans' minds when they founded New England. Yet (with Ronald Reagan's help) we still seem to think that John Winthrop—and perhaps even Jesus—meant the American nation when he spoke of a "city on a hill."

One of the best antidotes for this American national myopia is realizing just how English the early Puritans were. I can think of no better book for this purpose than Francis Bremer's Building a New Jerusalem: John Davenport, a Puritan in Three Worlds. Bremer, one the leading scholarly experts on the Puritans, uses the influential but understudied Davenport, the founder of the equally understudied New Haven Colony, to shift our view of the Puritans by de-centering America generally, and Massachusetts specifically.

Born in England in 1597, Davenport did not come to America until he was forty years old. By then, he was a principled veteran of the puritan movement in England and the Netherlands, having reluctantly concluded that he could not comply with Anglican demands to implement extra-biblical practices such as kneeling at communion.

Bremer traces much of Davenport's zeal for transatlantic religious reform to his belief that he was living during the "Middle Advent," a time in which the Holy Spirit would powerfully transform true (Protestant) churches to prepare them for Christ's second coming.

Non-specialists may struggle with the biography's painstaking details, but Bremer convincingly uses Davenport to disrupt notions of the typical American Puritan. Indeed, Bremer contends that through the lens of Davenport's fully transatlantic life, we see more clearly that there "was no such thing as a typical puritan."

Thomas S. Kidd is professor of history at Baylor University. He is writing a biography of George Whitefield for Yale University Press.