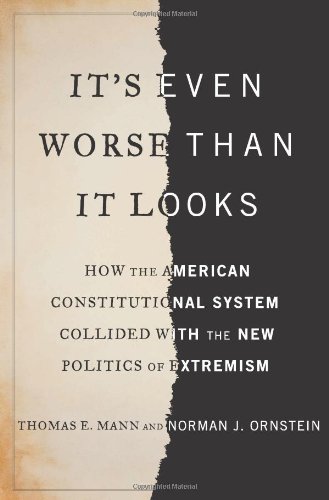 It's Even Worse Than It Looks: How the American Constitutional System Collided With the New Politics of Extremism
Norman J. Ornstein; Thomas E. Mann
Basic Books, 2012
240 pp., 26.00 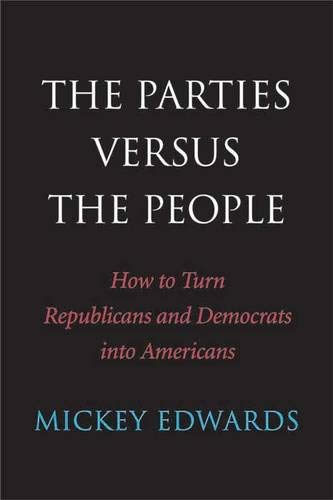 The Parties Versus the People: How to Turn Republicans and Democrats into Americans
Mickey Edwards
Yale University Press, 2012
232 pp., 40.00

Last summer I completed the manuscript of a book designed to encourage Christians to engage in politics with humility, grace, and reason. One publishing board rejected my manuscript, explaining that my book was reasonable, even-handed, and therefore doomed to marketing failure. Edgy political books sell, they said; readers aren't interested in a reasonable and balanced approach.

Perhaps Thomas Mann and Norman Ornstein received similar feedback when pitching ideas for their latest book, It's Even Worse Than It Looks: How the American Constitutional System Collided with the New Politics of Extremism. These two noted scholars of congressional politics have moved away from cogent, helpful analysis toward a one-sided tirade. In multiple places throughout the book, the authors are guilty of the same practices they decry: hyperbole, attributing the worst possible motivations, and selective use of evidence. The marketing folks are likely pleased; the book reached onto the New York Times bestseller list and garnered headlines.

Mickey Edwards' book on a similar topic, The Parties Versus the People: How to Turn Republicans and Democrats into Americans, is much more balanced and reasonable than Mann and Ornstein's polemic, so it is probably doomed to sell fewer copies and capture less attention. It may be less punchy, but it is a wiser investment of the reader's time. The retired Republican Congressman agrees with Mann and Ornstein on many points; he is also deeply concerned about party tribalism and the political stalemate it fosters. But Edwards casts blame far and wide—onto Republicans, Democrats, and even at times his own actions during eight terms in Congress. Both books raise fundamental concerns about the health of our constitutional democracy, beginning with sections that diagnose the problems and concluding with suggestions for reform. The authors agree that the constitutional experiment has worked well for more than two centuries, and they argue that recent patterns threaten the stability and success of American government. Mann and Ornstein clearly explain how and why our checks and balances system is designed for incremental change, and they make a persuasive case that it functions best with two broad-based parties that work together to forge compromise. Edwards points to the Founding Fathers' concerns about the dangers of faction and offers contemporary examples of ways that rigid partisanship hinders democratic representation.

In the first part of their book, Mann and Ornstein diagnose two central problems with contemporary politics: adversarial and ideological parties that don't function well in our constitutional democracy, and the Republicans. Or, to be more precise, the "ideologically extreme; contemptuous of the inherited social and economic policy regime; scornful of compromise; unpersuaded by conventional understanding of facts, evidence, and science; and dismissive of the legitimacy of its political opposition" Republicans. Just in case a reader might overlook it, the authors repeat this screed in two different chapters.

I share the Mann and Ornstein's concerns about political stalemate, and I agree that the Republicans deserve plenty of blame. But the Democrats are not relatively innocent bystanders in the political game. Mann and Ornstein act as if the Republicans are the primary source of the problems in Washington, and they offer scores of examples to demonstrate their points. They make it clear that they will not offer a balanced approach, in large part, they claim, because so doing would ignore the facts. In their zeal to paint the GOP as Public Enemy Number One, however, they repeatedly ascribe the worst possible motives for Republican actions even as they ignore some of the most egregious instances of Democratic leaders in hyperpartisan mode.

Consider a couple of illustrative examples. Mann and Ornstein note that some Republican members "[e]schewed a Washington residence and slept in their offices, as a mark of their determination not to be captured by the evil Capitol culture." I can't speak for every one of the members who bunk in their offices and shower in the Capitol gym, but the one I know personally did so for a very different reason: He couldn't afford to pay his mortgage back home, put his kids through college, and pay rent in DC.

Elsewhere, the authors offer some insightful critiques of rapidly changing campaign finance law and practice, but they make little attempt to shed light on organizations aligned with both parties that are manipulating the system to promote their candidates and ideals. When they raise concerns about groups using their 501(c)4 non-profit status for political ends, for example, they only criticize Republican-leaning organizations and ignore similar practices by many groups firmly in the Democratic camp.

In the second section of the book, the authors caution their readers against four possible solutions they label "bromides" that should be avoided at all costs: the creation of a third party, a balanced budget amendment, term limits, and public financing of elections. They then offer three solutions to the current problems: expanding the electorate, converting votes into seats, and changing some campaign finance and spending laws.

Some of their remedies seem promising, such as automating voter registration even further and moving Election Day to the weekend. They wisely call for transformation of the political culture, exhorting political observers, elected officials, and other opinion leaders to denounce those who use vitriolic rhetoric, extreme distortion and lies to score political points. Yet other proposals, such as mandatory voting (cast your ballot or pay a fine), run counter to core American political values.

Many Republicans in Congress do seem to care more about their party than governing. The Tea Party movement has pressured the GOP rightward and made it difficult, if not impossible, for legislators to reach compromises necessary to govern. Mann and Ornstein's descriptions indeed fit the ideology and tactics of some Republican legislators, but such blanket condemnation of the party is an example of the scorn and dismissiveness that the authors rightly criticize in others.

By the end of the book, it seems that Mann and Ornstein have spilled a lot of ink wishing for the bygone days of the Great Society. They are clearly concerned about the anti-government sentiment gaining ground in contemporary politics. If they wanted to write a book defending the need for government and the importance of the social welfare state, they would have provided a constructive contribution to current political debates. But their one-sided attack on Republicans sullies the academic reputation they have earned in their decades of study of Congress.

Mickey Edwards' book began as an article in Atlantic Monthly, "How to Turn Republicans and Democrats into Americans," which captured significant attention. Edwards describes his book as an effort to begin a protest against the party polarization threatening the institution of Congress and its constituents.

Edwards dates the current era of partisanship back to Democratic Speaker Jim Wright. He argues that this trend escalated under Republican Speaker Newt Gingrich to extreme partisanship, a pattern of elevating party interest above the public interest that has continued ever since. Unlike Mann and Ornstein, Edwards builds his case with ample evidence from both parties and generally offers even-handed criticism. For example, when he calls out Nancy Pelosi for telling the media her goal as Speaker of the House was to elect more Democrats, he also disparages Mitch McConnell for saying his top Senate leadership priority was preventing Obama's re-election.

After outlining what he views as the most significant problems in governing today, Edwards suggests six reforms. He proposes three changes to the electoral system: moving to open primaries in all states, making the redistricting process nonpartisan, and reforming campaigns to reduce spending and lessen the need for money. He recommends three steps for reforming government itself: eliminate or reduce the influence of parties in congressional leadership, change the rules in the House and Senate to facilitate democratic deliberation, and "rearrange the furniture" in congressional chambers and meeting rooms so that partisans no longer sit together on opposing sides.

Edwards makes a strong case for these reforms, but many of his proposals would significantly change congressional procedures and traditions that, until recently, have worked reasonably well. Although he was unable to convince me that most of his proposals would be possible, I was impressed with his clear and careful explanation of his positions. Both of these books raise important criticisms that citizens of a constitutional democracy need to hear. Contemporary politics rewards political point-scoring more than effective governance, and, contrary to what Mann and Ornstein want you to believe, both parties are at fault. In recent years, some high-profile Republicans and Democrats have lost leadership posts, primary battles, and party support because of their attempts to work across the aisle or refusal to tow the party line. The "throw the bums out" mentality so common in recent elections only exacerbates the problems and encourages party leaders to overpromise and overblame.

The current election season doesn't offer a lot of hope for improvement—but what better time to pause and reflect on what we expect from our government, our political leaders, and ourselves to serve the common good?

Amy E. Black is Associate Professor of Political Science and Chair of the Department of Politics and International Relations at Wheaton College and the author of Honoring God in Red or Blue: Approaching Politics with Humility, Grace, and Reason (Moody Publishers, 2012).

Fair and balanced only serves the public good when the things being reported on are equivalent. The modern American media---the segment that truly tries to be fair, not biased political organs like Fox News---ends up striving to find equivalency, even when none exists, and that relatively recent tendency has greatly dumbed down the public discourse. Will that situation change? Not as long as information and news are money-making commodities. There is very little room for truth in that milieu.