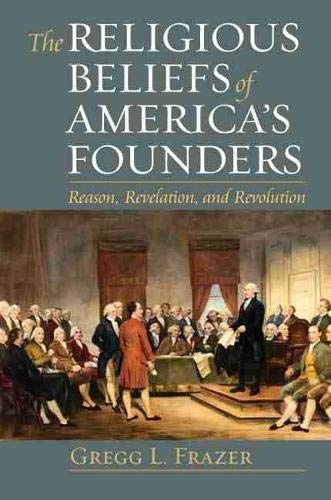 The religious beliefs of America's Founders.

The debate over religion and the American founding has typically played out between those who say the Founders created a specifically Christian nation and those who argue that the Founders were largely Deists who wanted a secular government. Gregg Frazer provides a genuinely new approach. From a Christian perspective (Frazer teaches at the Master's College, where the influential Bible teacher John MacArthur is president), he concludes that the leading Founders were neither Deists nor Christians but rather "theistic rationalists." They believed in an active God, but they "denied every fundamental doctrine of Christianity" and made human reason the ultimate test of belief.

Frazer makes a well-researched if familiar argument that Founders such as John Adams, Thomas Jefferson, and Ben Franklin do not fit easily into the Deist or Christian mold. But Frazer goes further by insisting that they were definitely not Christians or Deists, but only theistic rationalists. This label, of course, is not one that the Founders themselves used. Most of them, whatever personal heresies they indulged, would have identified as Christians, while Franklin called himself a Deist. But Frazer has firm doctrinal concepts of who counts as a Christian or a Deist, and he finds that none of the major Founders meet the standards. He does not include figures such as Patrick Henry or Roger Sherman, who were undeniably orthodox Christians, although he does offer Princeton president John Witherspoon as an example of a Christian who exalted human reason.

Sometimes Frazer does acknowledge that the story may be more complex, such as when he speaks of the Founders' "hybrid" faith having both Christian and Deistic features. Mostly, however, he contends that the Founders consciously rejected both Deism and Christianity. He even makes George Washington's relative silence regarding his faith fit the thesis, saying that "Washington was not a Christian but a theistic rationalist." Frazer's book is an important addition to this debate, but some will find that he falls into the same trap that has ensnared many of his Christian and secular rivals: advancing such a strong argument that his evidence bends to match it.

Thomas S. Kidd is Senior Fellow at the Institute for Studies of Religion, Baylor University, and the author most recently of Patrick Henry: First Among Patriots (Basic Books).