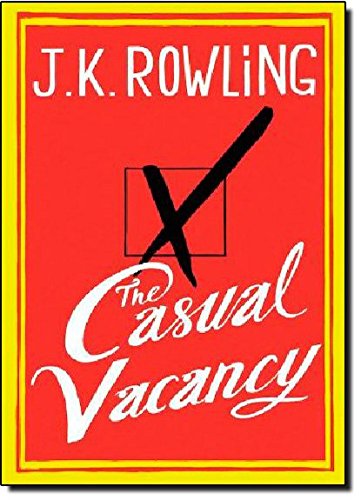 I did not expect The Casual Vacancy to resemble Harry Potter in any way. J. K. Rowling's new novel, I had read, would be contemporary realism, not fantasy, aimed at adults, not young teens. It would feature an entire village, not an intrepid trio; its theme would be small-town hypocrisy, not the cosmic battle between good and evil. OK, I thought, maybe it will be like something Maeve Binchy or Elizabeth Buchan or Joanna Trollope might write. Fine: I like "hen lit."

So eight days ago, when the book was released, I grabbed one of the 2 million hardcover copies published in the U.S., began reading, and quickly appreciated Ian Parker's faint praise in the "New Yorker": " 'The Casual Vacancy' will certainly sell, and it may also be liked." Several hours into the book I emailed a friend: "I'm on page 183 and am waiting to be captivated." Joanna Trollope this was not.

Here's the situation: Barry Fairbrother, banker and councillor in the English West Country village of Pagford, drops dead. Various people must deal with his absence: his wife and four children, the council president and deli owner, a couple of lawyers, the local high school's deputy headmaster, a guidance counselor, several social workers, a pair of doctors, a factory manager, a nurse, a junkie's daughter, a financier, and several seriously confused adolescents.

Unfortunately, we must memorize some 30 names and learn a lot of backstories before getting to the book's central conflict: how to fill Barry's vacant council seat and, more broadly, how to deal with the underprivileged residents of the Fields, a subsidized housing project for the desperately poor. By the time the pace picks up, many readers—if Amazon's customer reviews are to be believed—have already given up. Too bad: for those who persist, The Casual Vacancy eventually becomes both fascinating and provocative.

Most of the instant reviews were, at best, tepid. Theo Tait, writing in the Guardian, called it "a solid, traditional and determinedly unadventurous English novel …. The book seems doomed to be known as Mugglemarch."

The New York Times reviewer was even less flattering. "The real-life world [Rowling] has limned in these pages is so willfully banal, so depressingly clichéd that 'The Casual Vacancy' is not only disappointing—it's dull," wrote Michiko Kakutani ("Darkness and Death, No Magic to Help"). "The novel … reads like an odd mash-up of a dark soap opera like 'Peyton Place' with one of those very British Barbara Pym novels, depicting small-town, circumscribed lives."

Everyone agreed that Pagford has nothing to do with Hogwarts: "The only obvious parallel with the Potter books is that, like them, it is animated by a strong dislike of mean, unsympathetic, small-minded folk," says Tait. But everyone may have read too quickly. The Casual Vacancy and the Harry Potter series are alike in one important respect. Both are based on a profoundly biblical worldview.

Chapter 1 introduces us to "the pretty little town of Pagford," dominated by "the dark skeleton of the ruined abbey." The expensive houses are located in Church Row. The church itself is "mock-Gothic." The townspeople, we will learn in later chapters, use the building for school plays and council meetings and parties. Another former church, Bellchapel, has been turned into an addiction treatment center. The Old Vicarage is now owned by a Sikh family. Rowling seems to want us to know that the world of The Casual Vacancy is decidedly post-Christian. It is what Quaker theologian D. Elton Trueblood once termed a "cut flower civilization": pretty now, but rootless and doomed.

And then Barry Fairbrother drops dead.

If this book has a Christ figure, it is Fairbrother. He had not shared in the village's sins, though he was falsely accused. He reached out to loners, the mentally ill, immigrants, the unattractive, and even the trouble-making daughter of a notorious prostitute and addict. He was the "living example," thinks one of the few likable characters, of what the council members proposed in theory. "Did they not see," she muses, "what hopeless advocates they were, compared to the man who had died?" Even his name has Christian overtones: "Fairest Lord Jesus," "Jesus Our Brother, Strong and Good." He does not come back to life, alas.

Now Pagford, a village without a living faith, is a village without its one upstanding citizen. No one is fit to fill Fairbrother's council seat, and yet the council must go ahead and make major decisions involving the poor who share their schools and social services. No wonder things are a mess.

I am not saying that J.K. Rowling has written a Christian allegory; The Casual Vacancy is far more complex than that. Neither am I saying that she was thinking of the Gospels when she devised her plot; it seems unlikely. On her website she says, "I love nineteenth century novels that centre on a town or village. This is my attempt to do a modern version." Perhaps religious themes sneaked in through her deep acquaintance with Victorian authors and biblical literature. Perhaps she included them intentionally. However they got into the novel, they are hard to miss once you go looking for them.

For example, the upstanding residents of Pagford, like the Pharisee in Jesus' parable (Luke 18:9-14), are thankful that they are not like their neighbors in the Fields:

Pagford, by contrast, shone with a kind of moral radiance in Howard's mind, as though the collective soul of the community was made manifest in its cobbled streets, its hills, its picturesque houses … a micro-civilization that stood firmly against a national decline.

Most of these morally radiant citizens, however, are extremely self-absorbed. They love themselves, but they have no time for their neighbors. We may expect as much of the teenagers, though we sympathize with the school guidance counselor who sometimes wants to shout at the kids, "You must accept the reality of other people …. You must accept that we are as real as you are; you must accept that you are not God." Sadly, the grown-ups are worse than the kids. Sixteen-year-old Andrew "asked himself whether Simon [his father] even saw other humans as real …. Simon did nothing that required collaboration, and had never evinced the smallest interest in anything that did not benefit him directly."

This pervasive selfishness means that Pagford, though outwardly pretty, is full of sins: adultery, abuse, theft, gluttony, drunkenness, racism, bullying, indifference, neglect, hatred, envy, pride. Jesus could well have castigated them in the words he directed at the scribes and Pharisees, "Woe to you, … hypocrites! For you are like whitewashed tombs, which on the outside look beautiful, but inside they are full of the bones of the dead and of all kinds of filth" (Matt. 23:27).

Their sins will not go unpunished. Like the Harry Potter books, The Casual Vacancy is apocalyptic. It does not feature colorful cosmic battles like those in The Deathly Hallows and the Book of Revelation (though one character feels "it would have been a relief if St. Michael had stepped down from his glowing window and enacted judgment on them all"). Rather, like the "little apocalypses" of the Gospels, it is about revelation, unveiling, and judgment.

"Nothing is covered up that will not be uncovered," Jesus warns, "and nothing secret that will not become known. Therefore whatever you have … whispered behind closed doors will be proclaimed from the housetops" (Luke 12:1-3). Presumably Jesus isn't thinking of the Internet, but some of Pagford's children spend their days staring at computer monitors. Pagford's elders have no idea how much the kids know about them—or how easily they can reveal their secrets to the entire village. If "one's foes will be members of one's own household" (Matt. 10:36), one's judges, too, are close at hand.

The Sikh doctor is one of the few Pagford citizens who knows "what Christians were supposed to believe in. Love thy neighbor as thyself." But who are Pagford's neighbors, and what would it mean to love them? The day of the fateful council meeting arrives. Political battle lines are defended:

"We're having to make some very difficult decisions at District Council level," said Aubrey Fawley [a wealthy financier]. "The government's looking for more than a billion in savings from local government. We cannot continue to provide services the way we have done. That's the reality."

In rhetoric familiar to Americans in this election season, Fawley goes on to berate what he calls a "culture of entitlement" and "people who have literally not worked a day in their lives."

So tempers flare, and decisions are taken, and the book's many disparate stories interweave and move inexorably to a conclusion "so howlingly bleak," said Allison Pearson in the Telegraph, "that it makes Thomas Hardy look like PG Wodehouse."

Without offering any spoilers, I'll just suggest that you consider the Good Samaritan, the story Jesus told when someone asked him who, exactly, was the neighbor he was supposed to love (Luke 10:25-37). Change it so that at least three priests or Levites pass the injured person on the road without helping. Have the charitable foreigner provide money for the funeral, not the hospital. Let everyone heap posthumous praises on the people they despise ("Woe to you, scribes and Pharisees, hypocrites! For you build the tombs of the prophets and decorate the graves of the righteous, and you say, 'If we had lived in the days of our ancestors, we would not have taken part with them in shedding the blood of the prophets.' " Matt. 23:29-30). And when presented with the most obvious example of their collective guilt, let everyone in the congregation avert their eyes.

There's not enough redemption in The Casual Vacancy for my taste. A few people seem to have a change of heart at the end, but I'm skeptical. Maybe the impulse will stick. Maybe the council will reform. But Barry Fairbrother is still dead, and the abbey on the hill is still ruined, and most of the people of Pagford are still self-satisfied, racist social climbers. This is the world as it would be with Voldemort in charge. It is frighteningly familiar. It badly needs a Harry Potter to come to the rescue.