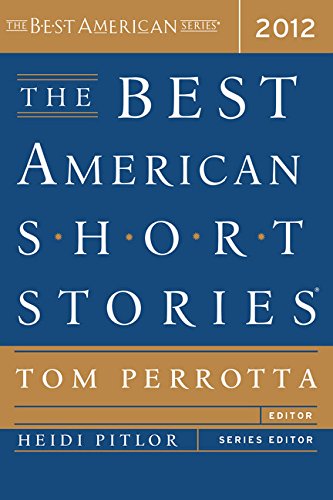 Calling out to one another.
October 2012

If the evening news is to be believed—I can go either way on this one—two million new and improved I-Phones were sold on the first day of offer. In the spirit of full disclosure: I don't own a cell phone, and I fret and mutter whenever I see another person using one in public. God invented phone booths for a reason, and not just for Superman to have a place to change. Walking down my street I pass a neighbor talking on her phone: "I just called to tell you I'm three houses away. I'll see you in a minute." Sitting in the airport at the gate, the litany as overheard: Hi, it's me, I'm here waiting for my plane. (Subtext: Can you see me? Do you care?). It has become commonplace to check the tiny screen each time the phone emits its cue.

Almost without exception, the characters in The Best American Short Stories 2012 don't seem to have cell phones or Twitter accounts. They neither tweet nor text. They send no emails. But these I think are the stories of people living in a world where electronics have been and done their worst, where mass communication has served to separate as much as to connect. This year's guest editor, Tom Perrotta—whose writing I have tried unsuccessfully, if halfheartedly, to like—has done a great job here. Taken together, this collection attempts to tell the story of people looking for love, albeit in any number of cases, in all the wrong places. If the business of fiction is to head out into the night with lanterns looking for ourselves, it is satisfying indeed to have these particular stories together, casting twenty different lights on these selves and their love lives—a term that might well cover so many dimensions.

First, and in many regards foremost, is Nathan Englander's stunning title story from his new collection What We Talk about When We Talk About Anne Frank. Two married couples, separated by time and country, habits and culture, spend an afternoon reminiscing and comparing lives and marriages, and later smoking a young son's marijuana, and at the end of the day, playing the Anne Frank Game, also called the Righteous Gentile Game, the Who Will Hide Me? Standing crowded in the pantry as evening falls, these four Jews imagine an American Holocaust, and naming one friend at a time, they ask, Do I believe this Christian would hide me? But as the light fades, as evening falls, they change the game to ask, What if my spouse were not a Jew, would he hide me? Would she hide me? What is the nature of love, what are the limits of faithfulness, Englander wants to know.

In Roxane Gay's "North Country," casual affiliations—regardless of the nouns and verbs co-opted as new nicknames for the segregation of the body from the self—are not enough. A mother mourns a stillborn child, and only when her lover finally comprehends her pain does he finally "fill up all the hollow spaces." In this collection there is less of the experimental, the high-wire acts, those stories in which we admire the achievement more than we love the story. Perrotta has an eye for stories of people who feel so deeply that we are made to identify with their sorrow and affection.

In Steven Millhauser's wonderful "Miracle Polish," a man buys a jar of mirror polish from a pitied salesman who knocks on his front door. When one day he finally tries it out, the polish transforms any life whose image the mirror reflects. Over time this single man fills his house with mirrors, driving off his girlfriend when she realizes he only wants to see her in this new, reflected perfection. In the end he is alone, awaiting the polish salesman's hoped-for return; fantasy promises a finer image than reality could ever display.

When love is found, its consequences and reverberations can be lovely. In Carol Anshaw's "The Last Speaker of the Language," Darlyn (read the name aloud) sells paint at Home Depot, where she has been instructed to push the overstocked paint color Butterscotch Heather: It's the new gray. But today Darlyn is feeling love, she's feeling loved, and this blessing opens up "an entire universe tumbling with color and light," a "harrowing/fabulous love" under the influence of which she sells her customer the True Gray that he prefers. At home, Darlyn stands in a "delicious stillness, picks up an open box of nails and smells inside. Like spring, wet and elemental." Her brother cautions her that love can't last. "I know that," Darlyn says, "I know that. It's just about—even for a day—being this purely happy. Like, happy to be a carbon-based life form."

Alice Munro's "Axis" reminds us that love in all its guises and disguises can live a long, long time. A teenage romance casts a shadow lengthening out over decades, fading maybe, finally only dimly remembered perhaps, but never gone. And just because she can, Munro ends the story, now deftly told and all concluded, with a sentence, almost a throwaway, that is a pure delight. In a chance encounter on a train, a man and woman reminisce, not having seen one another since they were at school. She disappoints him by asking prying questions about the past: "Trying to get at some spot of live regret right under the ribs. A woman." Munro works her magic. Perrotta, in his introduction, paying tribute where it's due, names Munro as the writer who looms over this collection, as she does over the art of the short story in North America, praising her "formal daring, her insistence on smuggling the full range of novelistic techniques into the writing of short fiction," crediting the influence she's had on her contemporaries.

Jess Walter's "Anything Helps" poses chilling questions about another sort of love, that of a parent for a child—in this case an addict's love for his young son, living in a foster home. No step this father takes is casual, but each is grounded in his loving: first the choice to go on living—always a matter of decision—then to stare his demons down, to go back to the homeless shelter he calls the Jesus Beds, and there, to stand holding a book, outside in the rain, to pull his jacket over his head to shield the page, and then to read … aloud, to himself, with an accent and everything. Bit by bit: Bit the father's given name.

Another telling of a parent's love, Sharon Solwitz's "Alive," chronicles an impromptu ski trip of a mother and her two young sons, one of whom is on a break from chemotherapy and blood transfusions for his cancer. The healthy brother has an accident out on the toughest slope, but with only broken bones survives, and the mother jumps onto his survival like a life raft; even as a boy, her son realizes she will rely upon him, cling to him, for the rest of her life. In this, as is so many of these stories, the care we take of one another costs us dearly. No texting ever long enough to tell this story.

This is not a book of love stories, but it is the first volume in this series in a number of years to include so many explorations of our frank longing for relationships, our earnest, if misguided, attempts to make them work and to deal with the quandaries they bring to our lives. Ezra Pound called upon "the artist to make humanity aware of itself," and so these stories do. In a brilliant New Yorker piece on Henry James, Anthony Lane imagines our current state as seen by James, describing modern living rising up "like a bad dream; an archipelago of solitudes, feverishly interlinked, with bridges collapsing as fast as we can build them." We must be thankful for this collection, which does not require the distance of a century to help us see ourselves and know that no matter how many phones we buy, in the end we're calling out to one another.

Linda McCullough Moore is a writer living in Northampton, Massachusetts. Her most recent short story, "It's Hard to Know What You Need," appears in the October issue of THE SUN. www.lindamcculloughmoore.com