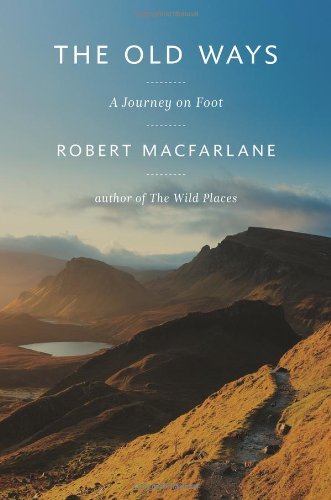 "It was meant to narrow their possible thoughts."

My fifteen-year-old daughter was ruminating about Newspeak, remembering it from Orwell's 1984, noting how the landscape of language could influence a person's range of experience and boundary-crossing.

She and walking-man Robert Macfarlane might get along, though at her age she would not be invited to drink the free-flowing gin and wine of the wayfarer's repose and conviviality.

Macfarlane has walked about seven to eight thousand miles in his life, a thousand of which he must have kept in mind by recording sights, sounds, stories, physical and mental maps—to later gather into The Old Ways: A Journey on Foot, a book that we might characterize much like he characterized Anna Shepherd's work The Living Mountain: "a celebratory prose poem … a geo-poetic quest."

To plumb even a generous sampling of the experiences and musings in this 364-page book (and that excludes the glossary, notes, bibliography, and index, which only a reader like my daughter would insist on perusing as well, bringing the total to around 433 readable, or at least viewable, pages), a reader needs to make a substantial commitment. It takes time to journey through these pages.

Macfarlane's ideal reader would possess a mix of linguistic curiosity, fascination with painterly images, a sense that it is not important to take anything particular from the journey, a patience in climbing through descriptions of gneiss or chalk in its many variations, and the willingness to be a beginner again in the presence of one so clearly expert on matters of geology, poetry, and history.

In 1984—the year, not the book—I took the most mind-numbing class of my entire educational experience: Geology 101. A dedicated student, I spent hours on end reading a text that I only remember now for its maps of magnetic fields and its many lists of rock formations, soil types, and ocean depths. The rest is an unhappy blur. Yet I found myself open to Macfarlane's catalogues, perhaps because he framed his listings as early as page 13: "Say the names of paths out loud and at speed and they become a poem or rite—holloways, bostles, shutes, driftways, lichways, ridings, halterpaths, cartways, carneys, causeways, herepaths." By the time I'd advanced to his discussion of Central Northern England's chalk, I had acquired the requisite openness. In fact, I read the chalk chapter aloud to my daughter, and we imagined fictive worlds, names for new breads, classes of kingdoms (partly at Macfarlane's prompting). See if you might do the same:

If you are a person who must reach your destination—chalk or otherwise—posthaste, you will need to evaluate your suitability to take this reading journey. Macfarlane's lists are many, his pathways nonlinear. Meaning-making is sparse, and that is not a criticism so much as an observation. Macfarlane is taking you on his adventures, trying to recapture them with the same "grace of accuracy" he applies to his sea-companion Ian's actions and speech (he borrows this phrase from Robert Lowell, and it captures his own style, should you be the kind of reader who experiences grace through a depth of detail).

It might help if you knew what a sarha was (and is). It might help if you understood the political implications of such freedom in path-making. The section on walking in Palestine will lend you this knowledge. A sarha is "roaming without constraint or fixed plan," an aimlessness that only the politically free can afford. For the Palestinian companion Macfarlane walked with—Raja—the "sarha had become almost impossible. Hills that had once for him connoted freedom had come to feel endangered and endangering." Still, Raja walks. It is, for him, "a way of defeating the compression of space of the Occupation; a small but repeated act of civil disobedience."

Upon beginning my reading journey with Macfarlane, I made a decision: I would walk every day. I could not agree with him that journeys cannot be made without walking (ask me about the year I spent sitting outdoors in the same spot every single day; ask me about how it provided the journey inward that Macfarlane claims only walking can do). Yet. It seemed logical to try him at his word. I should walk. After all, am I not free to do so? To a point, yes. But I recently understood a fraction of Raja's complex relationship with walking, when I realized how I am confined to the paths my community has set out. It is a confinement of degrees; Raja's is far, far greater and somewhat frightening. Walking our paved roads, in the same direction, along the same prescribed routes day after day, I marveled that I would be less likely to walk across a neighbor's lawn (community disobedience) than Raja might be to cross an Israeli boundary line. But then Raja's sarhas were "an explicitly political act and walking as a means of resistance." What have I to resist in this semi-urban neighborhood?