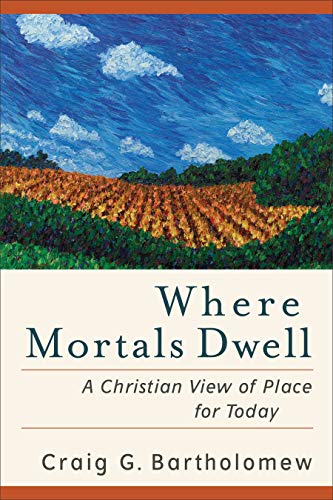 Recovering a sense of place

Having grown up in just one small town in East Texas, I prized our mobility in the early years of our marriage, but recently I've wondered how our itinerant lifestyle has affected my spiritual life. Does place—or, rather, chronic displacement—impact spiritual formation?

In Where Mortals Dwell, Craig Bartholomew argues that "one of the glories of being human" is to be implaced in a specific locale—that to exist at all we must be somewhere. Bartholomew further suggests that in contemporary Western culture, our sense of place has been deeply eroded, due to the time-space compression that is characteristic of postmodernity and globalization. When it once took months of travel to facilitate trade between Asia and Europe, we can now trade stocks in Singapore from our home computer.

Bartholomew agrees with Walter Brueggemann that we do not suffer so much from anomie, or meaninglessness, as we do from atopia, placelessness. Indeed, Bartholomew says, our sense of place is not merely neglected in Western culture but is actively suppressed.

In Where Mortals Dwell, Bartholomew hopes to help Christians recover a sense of place and "placemaking" in distinctively Christian terms. To accomplish this, he analyzes the concept of place in the Bible and in the Western philosophical and Christian traditions, wrapping up with a discussion of how Christians can pragmatically begin the work of placemaking in their local communities.

Bartholomew presents an extensive commentary on the significance of place in both the Old and New Testaments, beginning with creation. The doctrine of creation, he argues, is fundamental to a biblical theology of place for three reasons.

First, the doctrine of creation resists dualisms that minimize the importance of the material world, for God was pleased with the material world he created, calling it "good." Second, the doctrine of creation informs us of our responsibility to demonstrate a "cosmic concern" for the environment. Third, a biblical view of creation resists the nature-culture dichotomy that prizes the wilderness over the city. Though the first cities mentioned in Genesis seem to support the view held by many Christian thinkers, such as Jacques Ellul, that the city is a place of open rebellion against God, Bartholomew argues that the mandate to tend and steward the earth ultimately results in cultural development and the building of cities.

Similarly, Bartholomew argues that the doctrine of the incarnation is central to a biblical theology of place in the sense that the incarnation and resurrection are the ultimate affirmation of creation. The redemption that Christ offers encompasses the entire creation, leading it forward not to Eden but to the destiny that God originally intended for it.

As embodied creatures made in the image of God, we must acknowledge that our identity and our very being are deeply intertwined with place. The heart of God's judgment on Adam, Eve, and eventually Cain, was displacement. The expulsion of Adam and Eve from the garden was painful, "vomited out of the land" as they were. The curse of Cain for killing his brother was permanent displacement.

Bartholomew notes that place has a formative influence on the lives of individuals throughout the Scriptures. Central to the Abrahamic narratives and much of the Pentateuch is the theme of journeying and the land; Abraham journeys through the wilderness to the land God promised, and the people of Israel wander through the desert after their release from Egypt. Likewise, God uses the desert as a formational place in the lives of Moses, the Israelites, and Jesus.

Working with this robust theology of place, Bartholomew outlines several important implications for Christians. First, we should demonstrate care for our immediate environment, which begins with our home. Bartholomew advocates gardening and the "slow work" of homemaking such as making your own meals and replacing television dens with the front porch. Homes should also be smaller and more permanent. Since Christian institutions of higher learning already occupy a great deal of land, they ought to evaluate their use of the land and implement curriculum that teaches the importance of place and placemaking.

When churches build, Bartholomew says, they should take care that their buildings embody their faith—buildings should be localized in particular neighborhoods and should witness on the outside to the glory of the God they worship on the inside. For Bartholomew, this means moving away from the mall-like compounds so prominent among contemporary churches.