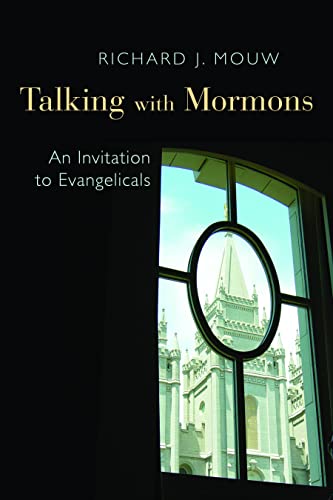 A Catholic looks at a Calvinist looking at Mormonism
May 2012

Richard Mouw, president of Fuller Theological Seminary, has two goals in this book. First, he wants evangelicals to stop demonizing Mormons. Second, he wants Mormons to be more Calvinist in their theology.

With the first goal—which will certainly provoke disagreement from some evangelicals—I am entirely in sympathy. I am convinced that we should take Mormons at their word and acknowledge the sincerity of their conviction that Jesus Christ is their Lord and Savior.

By now we should know better than to judge fellow followers of Jesus by the quality of their philosophical speculations rather than the fruits of their faith. Before long, we may hope, religious prejudices against Mormons will go the way of the once widespread prejudices against Roman Catholics. Mouw's book, written by an insider who can speak with sympathy to Mormon-despisers, will help to bring that about.

Mouw's second goal is a different story. That he—as a Calvinist—would like to see Mormonism become more Calvinistic is hardly surprising, but the two traditions make a very odd couple. The Mormon imagination is edgy and expansive while Calvinism is restrained and ascetic. Mormonism is a compendium of every 19th-century religious movement, including restorationism, apocalypticism, hermeticism, and even a healthy dose of liberalism. It is almost as catholic as the Roman Catholic Church—and that, for Mouw, is precisely its problem. After all, both Mormons and Catholics believe in the historical development of doctrine, divinization as the form of salvation, the need for centralized religious authority, the beauty of ritual, the connection between faith and love, and the existence of a heavenly Mother.

Calvinism, by contrast, is theologically lean and clean. Calvinism teaches "[t]hat God is sovereign and totally 'other' than the creation; that human beings are depraved sinners who are desperately in need of rescue by God; and that salvation is by grace alone." Mormons fail the Calvinist test because they believe that, as Mouw puts it, God and humans are "of the same species ontologically." Mormonism went wrong not with the Book of Mormon but with a flawed metaphysics.

Mouw argues that a "metaphysical gap" between God and us is essential to Christian faith and that Calvinism offers the best protection against any attempt to close that gap: "Judaism and Christianity have been united in their insistence that the Creator and creation—including God's human creatures—are divided by an unbridgeable 'being' gap." Mouw means that God's existence is so different from our own that it can be said that God is beyond being altogether. Put another way, God is so "other" that God cannot even be said "to be."

To me, that sounds more like Plato than Calvin. While it is true that the Church Fathers treated Plato as an honorary Christian, many theologians these days are arguing that we should reject the Platonic heritage of a dualism between spirit and matter, soul and body, and the transcendence and immanence of the divine. For these theologians, Mormons can be seen as metaphysical explorers of a post-Platonic Christianity.

At one point in this book, Mouw does identify an unexpected affinity between Mormonism and Calvinism: "it has often struck me," he writes, "that [the Mormon] view of their later scriptures is much like my own view of the Calvinist creedal documents that I subscribe to." This confession surprised me, and I was eager to hear him develop these parallels further. After all, Mouw regards the Heidelberg Catechism, the Belgic Confession, and the Synod of Dort as decisive "explanations and clarifications" of the Bible, which is how Mormons treat the Book of Mormon. Nevertheless, Mouw immediately retreats from his own insight: "If I come across someone—as I often do—who teaches something that conflicts with the system of thought set forth in these documents, I regard that teaching as less that fully biblical." Calvinism can certainly provide a solid framework for rigorous apologetics, but it can also function at times as one of the last refuges of old-fashioned fundamentalism.

Ironically, Mormonism was born from frustrations over this kind of aggressive and antagonistic argumentation. The young Joseph Smith despaired over the confusion and strife of the different denominations battling for his attention. Smith turned to visions and prophecy for new answers (just as today many Protestants are turning to Rome), but Mouw wants Mormons to return to the strict Calvinism that had already, in Smith's day, fragmented into a thousand competing pieces. Offering Calvinism to Mormons is like giving the victim of a dog bite the dog as compensation. Calvinism, for all of its intellectual achievements, can hardly be a source of healing for the fragmentation that it has helped to cause.

And yet for all of his Calvinistic crusading, Mouw ends his book on a warmly pietistic note. He recommends that evangelical theologians treat Mormonism the way Charles Hodge, the great 19th-century champion of Calvinist orthodoxy, treated Friedrich Schleiermacher, the father of liberal theology. Schleiermacher undercut the infallibility of the Bible, but Hodge admitted that his "personal faith in Christ was real." In the end, it is enough for Mouw that Mormons love Jesus: "People can have a defective theology about Christ while still putting their trust in the true Christ." With those words, Mouw sounds much more like an evangelical than a Calvinist (and demonstrates how far apart the two really are).

As a recent convert to Roman Catholicism, I think of both Mormonism and Calvinism as branches on the Christian tree, even though Calvinism, I admit, is closer to the trunk. The Mormon branch extends precariously far away, with countless twisting twigs cluttering its bark, while the Calvinist bough, straight and solid, looks like something I could climb out on without any fear. Nonetheless, I am happy that both of them bear good fruit and, by reaching out to the sun, return ample nourishment to the tree's roots.