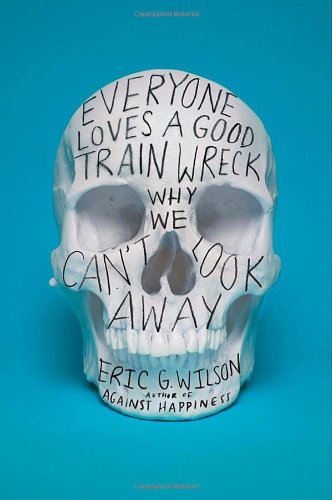 Everyone Loves a Good Train Wreck

For years, my father has hung a series of photos in his living room that have baffled and troubled me. Giant prints of film-star serial killers—Hannibal Lecter, Heath Ledger's Joker, No Country's Anton Chigurh darkening a door—hang next to photographs of my high school plays and Christmas dinners. It has always been strange to me, my father's obsession with these gruesome characters, their lone-ranger sadomasochism revealing my own fears about my father's interests: Why does he seem to venerate these men? Is he angry? Should I be concerned?

But if Eric G. Wilson were to meet my father, the element of strangeness would give way to camaraderie, and to a sensibility that recalls Flannery O'Connor: "I use the grotesque the way I do because people are deaf and dumb and need help to see and hear." In Everyone Loves a Good Train Wreck: Why We Can't Look Away, Wilson explores the fascination of the morbid. From images of planes striking the Twin Towers to the casket at his grandmother's funeral, the pull to "look," he suggests, says something about how we live, what we anticipate, and what we fear.

On the one hand, we disavow what Wilson calls a "morbid curiosity." We fear it because it both frightens and convicts us, and yet, none of us are exempt from it. "We've all felt that guilty rush before the morbid," Wilson writes. "The exploitation of a suicidal starlet; the assassination of a leader …, whatever our attraction, we are drawn to doom."

It is a bold statement, particularly for someone who does not have the stomach to give blood, let alone to watch Texas Chainsaw Massacre. But Wilson's book, a hybrid of memoir and cultural critique, names both the reality and the shape of that attraction. Is it shock alone that makes us love horror films? What draws our attention to the murder trial, the gory roots of fairy tales, the Taliban's videotaped executions of kidnapped Americans? And is that attention something to avoid, or does it lead us to a more redemptive understanding of what draws us together?

Wilson's meditation is more pilgrimage than intellectual exercise; through Aristotle, Jung, Oates, and the rendering of his own narrative, Wilson looks to create an ethic for "morbid curiosity." Reading the work of Maurice Sendak, for example, helps children navigate a "sinister world." Keeping up with the latest murder trial puts me in touch with the suffering of others and, in turn, connects me to a broader humanity. If we are to "weep with those who weep," such encounters help us to recognize the difficulties of others even as we reckon with our own shadows.

But what if that shadow is perverse? What if, instead of developing empathy, our encounters with what is grotesque sharpen our desires to be bloodthirsty, voyeuristic, or even pornographic? Wilson sketches a particularly American fascination with murderers and the celebrity status of their crimes: one criminal, a serial rapist and killer, sells his personal items on eBay as "murderabilia," relics for those whose morbid curiosity isolates them, their basements and garages packed with baby coffins and Charles Manson's paintings.

Yes, "morbid curiosity" can certainly lead us astray. But it can't be reduced to its worst manifestations. What is it about death that reconnects us to the body? Even if we shy away from the violent "train wrecks" of popular culture, Wilson notes that an attention to the morbid can be driven by "a spiritual yearning, a hunger to penetrate the most profound mysteries of existence." The resurrection of Christ, and the Eucharist itself, embody this yearning: take, eat of this body, broken to death; drink of the blood, an offering of life.

This is what Wilson seeks—a way to sustain belief, to see his curiosity as purposeful, not isolating or perverse. And as he scaffolds his experiences with his inquiry, he is brought to understand his fascination with the morbid as a kind of via negativa. By knowing what life is not, Wilson experiences what life actually is: his daughter, his wife, days lived above the bipolar depression that kindled such silent despair.

And here he echoes the desert monastics: defeating what is morbid and dark within your own self, the addictions and anxieties that are just as grotesque as Ted Bundy's Christmas letters, requires forgiveness, a putting aside of the ego, an "attempt to witness and embrace the real." Wilson's encounter with the morbid helps him to see and hear his own life, and in so doing, brings him to true empathy.

Wilson's initial purpose in writing the book was an attempt to understand his brother, whose fascination with horror movies was both perplexing and intriguing. As I get ready to send Wilson's book to my father, I'm not so worried about that poster of Hannibal Lecter. And admitting that might just be my first step into examining this curiosity myself, to go and take a look.

Allison Backous is instructor of English at Kuyper College and editor, creative writing, at The Other Journal.