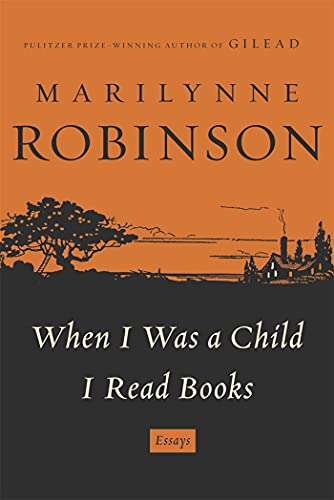 When I Was a Child I Read Books

A new collection of essays from Marilynne Robinson.

Anyone who cares about dismantling tired theological prejudices and religious stereotypes could do a lot worse than to linger over a conversation about the doctrine of predestination that takes place between John Ames and Jack Boughton. The scene is told twice, first in Marilynne Robinson's 2006 novel Gilead, then again in the follow-up novel Home, the second panel in Robinson's diptych about two families in a small Iowa town coping with the upending of an uneasy peace.

Ames, a Congregationalist minister and reader of Reformed theology, is seated on his old friend Robert Boughton's front porch. Boughton is a fellow minister, a Presbyterian, whose estranged son has recently turned up again, raking his fingers across old wounds. Jack, the son, puts the question to Ames, "Do you think some people are intentionally and irretrievably consigned to perdition?"

As the conversation unfolds, it becomes clear, if it wasn't clear from the outset, that Jack is asking about himself. Knowing how he has hurt his family, he has come back to the town where he grew up to seek—what? absolution? atonement? He wonders if people can change. Ames dodges the question, not only for its theological intractability—"I have spent a great part of my life hearing that doctrine talked up and down, and no one's understanding ever advanced one iota"—but also because giving a negative answer would mean forgiving Jack for the way he has hurt old Rev. Boughton, as well as Ames himself. And that's not something Ames, for all his wisdom and sensitivity, is quite prepared to do yet.

It's a memorable scene, delicate in its evocation of character and the subtleties of barely suppressed anguish, all in the economy of three pages. More than that, it displays how theological or religious language works—its self-involving character, its demand for patient self-scrutiny and self-commitment. The scene eschews, on the one hand, cynicism about religion (the claim, for instance, that Calvinism leads only to fatalistic despair) and, on the other, a Pollyanna-like view of religion's role in human life (in this case, the false comfort of the "good man," Ames, being right and the "bad man," Jack, being wrong). In these ways, the scene showcases a recurring theme in all of Robinson's books: the unraveling of the dichotomy between religion and humane, ennobling forms of individual and social life.

In her new collection of essays, When I Was a Child I Read Books, Robinson examines that unfortunate dichotomy from all angles. On one side, the "new atheists" and their ilk badly caricature religion as an explanation of the world that competes with other explanations from disciplines of physics, biology, psychology, and so on. Viewed from another vantage point, religion itself often colludes with this ill-conceived critique, betraying its highest vision with sound-bite answers to genuinely open questions and hitching its wagon to dubious causes (like the defense of a historically novel "capitalism"). Science is equally misunderstood when its practitioners and its fundamentalist detractors alike view it as a way of understanding that can dispense with religion, as if the latter were a veneer obscuring a more persuasive, secularized explanation of life. In this spiral of mutual misunderstanding, the humanist ideal of deepening appreciation for the awe and "depth dimension" of human existence is curtailed.

Robinson offers her essays in the face of this confusion, as "night thoughts of a baffled humanist," which is how she referred to her musings in a recent Internet excerpt from the book. She aims to defend both religion and humanism from their not-quite-so cultured despisers, many of whom may be found self-identifying as "religious" or as "humanists."

Religion, at least in many of its current American conservative forms, has, in Robinson's eyes, largely abandoned its task of eliciting wonder and cultivating an appreciation of the human capacity to surprise:

In contemporary religious circles, souls, if they are mentioned at all, tend to be spoken of as saved or lost, having answered some set of divine expectations or failed to answer them, having arrived at some crucial realization or failed to arrive at it. So the soul, the masterpiece of creation, is more or less reduced to a token signifying cosmic acceptance or rejection, having little or nothing to do with that miraculous thing, the felt experience of life, except insofar as life offers distractions or temptations.

One reads this and recalls the sharp either-or Jack Boughton poses to Ames.

But humanism—that worshipful acknowledgment of the unplumbed mystery of human personhood, an acknowledgment Robinson wants to see religion recover—has sold its own birthright as well, repeating the nostrums of an overweening scientism that, rather than elucidating mystery, forecloses it. Reading popular accounts of evolutionary psychology, Robinson finds it to be "characteristic of these queries into human nature that everything exceptional about us and about the situation in the world we have created for ourselves is excluded from consideration." Such pseudo-science assures us that altruism, artistry, and other humane pursuits are inessential to our true being, since they're better described as hardwired survival mechanisms: they're not pleasantries we'd wish to live without, to be sure, but nor are they markers of human uniqueness and glory. Reductionist though it is, this pronouncement is worth taking seriously "because versions of it are everywhere and because, whatever else it is, it is almost always presented as learned hypothesis if not outright 'information' about our kind."

For someone who has never read Robinson, I found this review engaging. I agree that religion and humanism have weakened our "appreciation for the awe and 'depth dimension' of human existence": religion is now "reduced to a token signifying cosmic acceptance or rejection" and humanism is now reduced to "repeating the nostrums of an overweening scientism." Beyond these general characterizations, I'd be interested in knowing if Robinson further speculates about why we late moderns take the mystery out of mystery. Psychologically and socially, what explains our need for closure? Is some closure desirable? What kind of closure is impossible? How much indeterminacy can we live with? I'm skeptical about Robinson's antidotes to the reductionism of religion and humanism: to purify through ressourcement. Outside schools, how exactly would that work in our families, friendships, neighborhoods, and churches? Ressourcement, to my ears, sounds like an academic project, not an existential one.