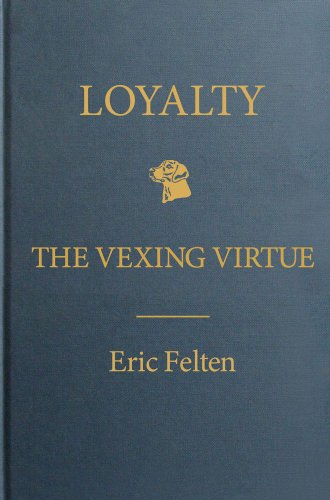 The protests of the Occupy Wall Street movement (now warming up again with the weather) provoked little fear of disloyalty. Laudably, news accounts of the movement largely refrained from characterizing the tent cities of the unwashed unemployed as un-American. This marked quite a change from the run-up to the Iraq War in 2003, when protest became associated with betrayal and even outright treachery. Who can forget the scorn heaped on the Dixie Chicks? Or the response of country music singer Toby Keith, beefy in his sleeveless flannel shirt, who proclaimed that protests against the war were disloyal?

If dissent does not as frequently incur the suspicion of moral corruption, perhaps the time is favorable for a more clear-eyed look at what it may mean to exercise loyalty. In Loyalty: The Vexing Virtue, Eric Felten explores how forms of loyalty such as fidelity, friendship, and faithfulness can themselves lead to unethical behavior. The vexation of the title aims to capture the clumsiness of blind commitment and the impossible quandaries of multiple attachments. Yet Felten's rhetorical position is complex. Loyalty spills over into vice, yet it should still be promoted more than it currently is. Loyalty is problematic, and we can't do without it.

As a columnist for the Wall Street Journal, Felten is best known to many readers for the "How's Your Drink?" feature, which ran weekly for several years. His knack for weaving bits of élite and saloon cultures into entertaining stories about the mint julep is apparent here. Loyalty is a lively read. Felten animates anecdotes and examples from antiquity to the present day in refreshing, rhythmic language. At times his gift of language works against him, as phrases become too catchy, too breezy. There's the "Jobian jam," for instance, which occurs when a person is accused of a crime and, like the biblical Job, is deserted by her supposedly loyal friends. Then there's former South Carolina governor Mark Sanford, described as "moon[ing] over his Argentine cutie." At book length, the verbal pyrotechnics can have a hypnotic effect. Felten would do well to rough it up a bit, make the language less showy.

Felten thinks loyalty gets a bad reputation, while conceding that sometimes this reputation is deserved. The objects of loyalty are the likely culprits: to what or to whom should an individual be loyal? God, country, spouse, employer, organic produce—our attachments are multiple. Because they conflict, we must deliberate which should take precedence and on what grounds. Despite these difficulties, Felten remains a cheerleader for loyalty. There may not be "one easy formula" for determining the point at which loyalty to a friend should outweigh loyalty to family or society, but the reader should not lose heart, as "there's been no shortage of strategies proposed to limit the number of soul-battering loyalties let loose in the bumper-car pavilion at one time." Just don't go down the path of novelist Graham Greene, who famously "renounced loyalty altogether."

Loyalty's primary method is the application of canonical examples to contemporary mores and recent events. Felten raises issues primarily to leave them unresolved, creating more of a commonplace book than a compelling argument. The number and combination of examples are the book's strongest attribute. Obama becomes a Prince Hal figure, for instance, with Jeremiah Wright the Falstaff whom he must betray to assume the mantle of power. In particular, I enjoyed the mash-up of Great Books and celebrity gossip in the chapter on marriage, "For Better or Worse." There Felten cites verses from Edmund Spenser and William Blake in a discussion of John Edwards' betrayal of his long-suffering wife.

Strange, intriguing juxtapositions lurk around every corner. We hear about Agamemnon's tragic decision to sacrifice his daughter, Iphigenia, as an example of when political loyalties take precedence over the bonds of kinship. A few pages later, Felten explores a counterexample in the form of Mario Puzo's The Godfather. Felten recalls Agamemnon in order to declaim against Kantian ethics; the next moment, he's using Don Corleone's allegiance to family as an illustration of Burkean conservatism.

Throughout, Felten remains an optimist, open to complexity. As a form of altruism, loyalty may take the form of a conditioned reflex, but the author casts this unthinking quality in favorable terms. Our progress in loyalty is a matter of "learning reflexive habits—virtues—that push us to behave in certain ways, even when those actions don't add up in any immediate calculation of rational self-interest." That adjective "reflexive" cuts two ways. The mechanical nature of habit is balanced elsewhere by Felten's desire that loyalty arise spontaneously, as the culmination of a process in which the individual reflects on his or her commitments in light of history and tradition. In this, Felten's message is backed up by the book's method. The run-through of classical tradition models for readers the intended process of reflection and hoped-for inculcation.

Loyalty examines the wide range of forms this virtue takes, from marriage, friendship, and political loyalty to the customer rewards program that keeps us going back to Office Depot. The weakest chapter in the book, "Bonding and Branding," explores the relation of loyalty to the consumer and corporate world. Noting that employee loyalty often goes unrewarded, Felten confirms that devotion to the company should not outweigh skill and ambition when it comes time for advancement. He asks, "would you prefer that the surgeon, whose skill will determine whether you walk again, was hired because he was the most doggedly loyal of residents?" That argument works for talking about back surgery. The situation changes when the applicant is an executive whose particular skill is relocating companies to China.

If contracts, rather than the spontaneous and affectionate ties of loyalty, "are the way to bind ourselves in business," Felten tries to limit the implications of this observation, by confining it to the economic realm. He insists that "contracts are an awkward fit for managing relationships of love and friendship." Most readers would agree. But they would also recognize that the attitudes, values, and lessons conveyed by particular economic arrangements filter through into everyday life, sometimes with disastrous results. To think otherwise is a delusion. Besides, the binding nature of contracts has served as the very foundation of legal and political relationships since the Enlightenment and before. That Felten does not acknowledge the pervasiveness of contractual relationships might explain why the loyalty he celebrates often has a feudal ring to it.

In the end, Felten issues the broad generalization that "if we give up on [loyalty] as a moral touchstone, love, trust, and commitment go with it." The logic of this statement seems fuzzy. Loyalty may be a necessary component of love and trust, but it does not follow that loyalty is sufficient to stand alone as a good in itself, or that its loss sets us on the slippery slope of moral decay. If we understand loyalty in terms of the human need for attachment, we can delve further into social complexities without worrying that loyalty is in danger of disappearing. In one of the more earnest statements in the book, Felten urges, "We have to believe that our disagreements are family squabbles, that even our most vigorous disputes are nothing but differences about what is best for the nation." I agree, but Felten would do well to remember that what constitutes a "family" is one of the more divisive issues that "we" face as a country today.

Jeffrey Galbraith is assistant professor of English at Wheaton College.