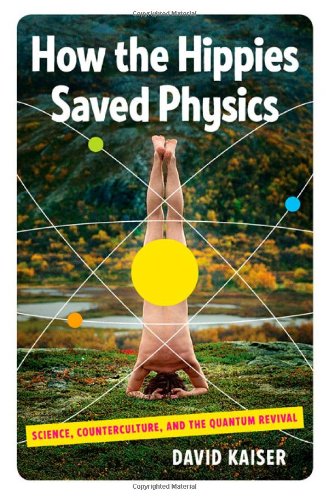 How the Hippies Saved Physics, Part 3

The usual narrative about the development of quantum theory begins with Planck's famous 1901 hypothesis of quantized behavior of light, goes through to Einstein's famous criticism of quantum mechanics in 1935, and then unabashedly skips forward to the work of John Bell in the 1960s and its experimental realizations some time after that. If you're lucky, the narrative will include at least minimal explanation as to this three-decade gap—usually along the lines of the following: "After the 1930s, interpretational questions were deemed too 'philosophical' and fell out of fashion. Then along came Bell … ." The span of years from World War II to the Cold War's end has often been presented in this way as a sort of historical black box. Black box no more, thanks to David Kaiser's How the Hippies Saved Physics.

Kaiser takes readers on a delightful and occasionally trippy historical tour of 1960s and '70s quantum physics, as practiced on the fringe. Along the way, he demonstrates that the influence of the counterculture on physics at this time was significant, despite not appearing so under the usual rubric of successful science. But the merits of Kaiser's revisionist history go beyond a well-crafted and engaging tale of hippies and quantum weirdness. As he concludes in the book's coda, though the renegade physicists' forays into parapsychology, occultism, Eastern mysticism and the like during this period did not result in much from a quantitative perspective (positive empirical results, major publications in peer-reviewed journals, breakthroughs in interpretational issues, etc.), their stories, when combined, provide us with a fascinating case study of what the scientific process is—and what it is not.

For example, this historical episode highlights the perennial problem of demarcation: by what criteria do we judge something to be science or pseudoscience? Which category certain projects fall into with respect to this question affects many things, among them the ever-pressing need for funding (who in science would willingly fund pseudoscientific pursuits?), as well as academic survival skills like garnering prestige (who will hire or collaborate with you if you do pseudoscience?) and the related "publish or perish" phenomenon (you must publish to survive in academia, but what peer-reviewed journal will publish pseudoscience?). All of these roadblocks (and more) were encountered at least once by most of the physicists of Kaiser's narrative during the course of their careers. The demarcation questions is a notoriously difficult one—philosophers of science have struggled to provide definitions of science that exclude obvious hack theories while at the same time incorporating all theories deemed "good" science—and Kaiser argues that in this instance, at least one baby (Bell's theorem) did (for some time, at least) get tossed out with the bathwater. And who knows how physics might have progressed but for this lamentable fact.

Another lesson to be found in Hippies is a warning against naive perceptions of science as objective and value-free. Science is an incorrigibly human endeavor. The story of the hippie physicists is a reminder, at once funny and poignant, that entire persons—their worldviews included—shape science, for better and for worse. We cannot fail to acknowledge the existence of such influences, and yet to uphold science as purely objective is to do just that.

To close on a methodological note, the events recounted in this book serve as a warning against an especially American tendency to veer towards what Kaiser terms "hyperpragmatism." The old "shut up and calculate" method of doing science has long dominated our classrooms and laboratories in place of more theoretical, historical, and philosophical approaches espoused in countries like Germany, France, and England. Though focus on application has certainly contributed to our country's prowess in science and technology, such success can fool us into adopting a utility-trumps-all attitude that has weighty consequences. Good science becomes equated with useful science, which tends to skew funding allocation (e.g., grant writers are forced to come up with all manner of "applications" for their proposed projects), and that in turn squelches research for research's sake. Kaiser's analysis of the effects of Cold War hyperpragmatism is especially pertinent in times of pressing economic concern like the present, when resources (financial and otherwise) for the arts and humanities as well as "pure" sciences are slashed drastically in favor of more practical, economy-building pursuits. Though Kaiser rightly notes that adopting less traditional methods for conceiving of and practicing science does not in any way guarantee profound results, a world that refuses to allow for the possibility of pushing and prodding (or sometimes punching and kicking) the boundaries of science—as the hippies did—would be a dark and dull place indeed.

Elise Crull is a research fellow at the College of Arts and Sciences, University of Aberdeen.