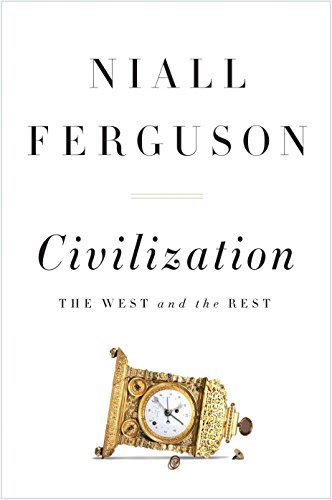 Civilization: The West and the Rest

Don't expect Niall Ferguson to be the first one to offer to buy another round of drinks: when his cheerful eyes scan the table, the glasses are apt still to look half full. His latest, Civilization: The West and the Rest, offers six factors which explain why the West became the greatest civilization in the history of the world: competition, science, property rights, medicine, the consumer society, and the work ethic.

As Ferguson meanders along with his sunny side up, one is apt to wince at times. To take one weird example, Isaac Singer, the inventor of the sewing machine, was a serial adulterer, bigamist, and sexual predator, including of his own employees. This is how Ferguson sees the matter: "Singer was evidently a man who loved women; has any man done more for womankind in return?" Ferguson's view of World War I is that it was a splendid opportunity to make advances in the field of psychiatry. Most of all, he engages in a running defense of the British Empire as, in truth, a global benefactor. Here is but one of numerous such efforts: "Britain was the world's banker, exporting prodigious amounts of capital to the rest of the world; perhaps contemporaries should have praised the English 'savings glut' rather than grumbled about imperialism."

Having said all that, I must go on to declare that this is a fascinating, thought-provoking book. With historians now writing monographs on ever more miniscule topics, Ferguson is to be applauded for putting forward an explanatory thesis about a subject matter as vast as Western civilization. This book reminded me a great deal of the stimulating panache and macro-reflection of Jared Diamond's Guns, Germs, and Steel.

Moreover, although Ferguson is a lifelong atheist married to an atheist activist (to whom this book is dedicated), his to-hell-with-political-correctness attitude means that he ends up repeatedly lauding religion, more particularly Christianity, more specifically Protestantism, and decidedly including Protestant missionaries to the Majority World: "The level of Protestant missionary activity has also proved to be a very good predictor of post-independence economic performance and political stability."

If Ferguson is remarkably rosy about Western civilization, the book is framed by a jeremiad that westerners, especially Europeans, are abandoning faith in their own civilization. This means that the West's five-hundred year ascendency is now ending and indeed the collapse of the whole civilization could suddenly come in the near future "like a thief in the night."

In contrast, the Majority World has been eagerly embracing the very factors that made the West great. This began with the westernization of Japan, which led on to huge economic benefits for that country. This draws Ferguson into a detailed, fascinating, and most unexpected discussion of the deep attractiveness of Christianity for the Chinese today: "only Christianity seems able to satisfy."

If that were not enough for Books & Culture readers, Ferguson goes on to reflect that a civilization is essentially the texts its reads and values: "But what are the foundational texts of Western civilization, that can bolster our belief in the almost boundless power of the free individual human being?" His own answer to this question begins: "I would suggest the King James Bible …." It is enough to make me want to buy the guy another drink.

Timothy Larsen, McManis Professor of Christian Thought at Wheaton College, is the author most recently of A People of One Book: The Bible and the Victorians, published last year by Oxford University Press.

A well-crafted and creative sentence is a sheer delight, and I celebrate the opening one in this review: "Don't expect Niall Ferguson to be the first one to offer to buy another round of drinks: when his cheerful eyes scan the table, the glasses are apt still to look half full." In light of Ferguson's "repeatedly lauding religion, more particularly Christianity, more specifically Protestantism," I wonder why he did not include religion in his "killer applications" that allowed the West to leap ahead of the Rest. That omission strikes me as a serious flaw in his account.