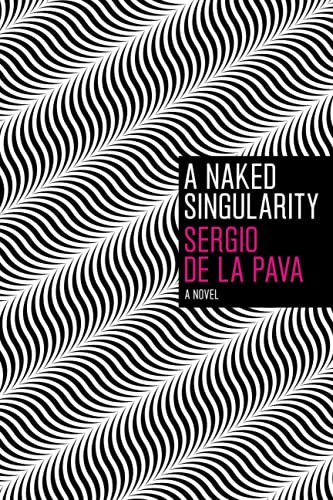 Editor's note: One of the most interesting and ambitious novels of the year is Sergio De La Pava's A Naked Singularity , published in May by the University of Chicago Press. David Michael talks with De La Pava about the book.

When did you initially write A Naked Singularity?

I originally self-published it in late 2008.

How did University of Chicago Press pick it up?

After I self-published it, a couple years went by and nothing really happened. Sometime in, I'm going to say, late 2010, a couple of reviews started appearing, and I gather that an editor at UChicago Press read some of the reviews, then read the book, and then got into contact with us.

I'm not great on the details. My wife handles most of that stuff.

What was the decision like to self-publish it—how did that come about?

After I finished the book, I looked for an agent for a few years, and nothing panned out. I was pretty willing to let it die and move on to the next thing. My wife was pretty adamant that I should publish it, and at some moment she convinced me to do that.

I did it on a print-on-demand service where you essentially print a book when anyone orders it, make it available on Amazon. An actual book—not just an ebook.

Because you self-published, did you have contacts who functioned as stand-ins for a publishing house editor?

I don't have any friends who are writers, editors, or in publishing, so the quick answer is no. I was generally happy with it; I wasn't thrilled beyond belief, and I didn't take the rejections to heart to where I thought it wasn't a worthy book. I tend to keep my own counsel when it comes to fiction, and I believe in how I do it. I felt like, eh, let's take it, bind it, and put it into a book. I never expected anything more than that to come of it.

The book is polymathic … almost encyclopedic. You bring together the law, social commentary, physics, music, and boxing. What's your background? Are you working in the legal system? What did you study?

I guess you could say I have a background in all the things you mentioned. I studied philosophy, I have a law degree. As far as things like physics and boxing, they're just big interests of mine though not formal pursuits. A lot of what I feel like I'm doing when I'm writing is keeping myself entertained, keeping myself interested. So it felt natural to include things that I found intensely interesting, provided that it would work within the framework of the story I was telling.
Which I think it does, but you're always coming up on the limits of that. How much of that hyper-elusive digressive thinking you can get away with while still hopefully telling a somewhat compelling and linear story. I thought that was the challenge that this particular book creates.

Some of the book's finest writing occurs in the portions about boxing. You primarily focus on boxing in the Seventies and Eighties. I wonder if you think boxing's dropped off since then? I get the impression that it seems to be dying a bit in popular culture, perhaps losing popularity to Ultimate Fighting.

The Eighties were probably the last real golden age of boxing. I would make an argument for the early Nineties as well. The book covers Wilfred Benitez, but also four other prominent boxers of that time. I would say that since then, the sport has definitely declined in popularity. It's gone the way of something like horse-racing. Except that what keeps horse-racing alive is the gambling, whereas with boxing, a lot of people have lost interest in it. I can't really blame them; it's a poorly run sport.

But it has its own beauty. It's a savage beauty, but it's definitely there. I think that's what I was responding to. I also felt that, with respect to Wilfred Benitez himself, there was a good theme there. He's the forgotten fighter of the five that I mention, and I felt talking about him at length fit in well with the story I was telling.

I found myself watching videos of him on YouTube after I finished the book.

It's funny. When I was writing the book, I found a guy who basically has every fight you've ever heard of on videocassette. I would correspond with this guy: "Hey do you by any chance have this really obscure Wilfred Benitez fight?" And sure enough, the video tape would arrive at my house a week later for eight or ten bucks. And that's how I did my research.

Nowadays, you could almost read the book and then pop in the YouTube clip. But it was a little more complicated than that at the time.

Earlier you mentioned horse racing in comparison to boxing. I think that horse racing is one of those sports like boxing or baseball, which have a tradition of really strong sports writing; whereas sports like basketball or football don't have that, perhaps because they're harder to write about or they just don't have that tradition. I'm wondering why you think that boxing has attracted such a following among writers?

It's complicated, and I don't know if, off the cuff, I could really do it justice. I think there is, underlying the sport of boxing, something like truth. There is something like an acknowledgement of what every individual will eventually have to deal with. When a boxer steps into a boxing ring, it's a pretty intense kind of distillation of what a large part of life can be about. I realize that's hinting at a lot more than what I'm saying, but unfortunately that's the best I can do.

The rate of incarceration in this country is an absurdity. It far eclipses other civilized countries. And I think it's something like fourth in executions. So those are indisputable statistics that we could point to. Regardless of what one's feelings are, politically and so on, some kind of malfunction is occurring where the U.S. is incarcerating a higher percentage of its citizens than other democracies. Or is just behind, say, Saudi Arabia in state sponsored executions.

Something has gone wrong despite what I would argue are some rather beautiful underlying qualities of the American criminal justice system. It's imperative to draw that distinction.If the rules that are on the books, the presumption of innocence, the burden of proof, were properly applied, the result would be a fair criminal justice system. But I think it's indisputable that that's not happening.

Obviously I could go on for an hour answering this question, which is a really complicated. I worry that what somebody takes away from it is, "Here's somebody who knows the criminal justice system and he's saying it's a fiasco." Well, that's simplistic. I think there are certain steps that this country absolutely needs to take to make the system fairer. But there are also a lot of times where what is failing the system is an individual or human beings and their weaknesses and not so much systemic.

Are there portrayals of the legal system within fiction that you've particularly liked?

I would say that fictional portrayals of the American criminal justice system, to me, seem uniformly bad. I must confess that's coming from a very shallow association with them. But generally speaking, these portrayals breed a lot of misinformation. I was very concerned that I not add to that, that I would not add to any misapprehensions that people have about what the system is and how it operates.The typical mass-entertainment depictions of the system are difficult to watch if you know what it's really like.

Because of the book's independent release, there was a danger it would go overlooked. I'm wondering if there are any books that you love that you feel are overlooked by the general reading community.

I have pretty broad and conventional tastes when it comes to fiction. I tend not to read too much contemporary fiction. I'm far more likely to pull out a 19th century-Russian novel than engage in whatever's hot at the moment. So I'm probably the wrong person to ask.

But what I think happened to A Naked Singularity and what I think is really a positive development is the way the internet has increased the amount of book coverage that's accessible for people. I remember a time when the shrinking of newspaper review space was viewed as a real threat to our culture. I think it still is, but internet literary magazines and the really high level of literary criticism taking place on the web have more than made up for that. One of the many benefits is that the undiscovered gem is a lot easier to find nowadays than when you needed a newspaper editor to come across a book and then assign it to someone to review. It was highly unlikely that something that had been ignored for three or four or five years would see the light of day. I think that that's different now.

These websites are going to be on the lookout and will give you their take on books that you probably would never have heard about ten or fifteen years ago.

That's my bit of optimism about literary culture for the day.

There's a passage in the book in which Toomberg discusses Casi's brief. He says that it's marked by "selfish prescriptivism" and reminds him a bit too much of advertising for it to be art. Granted they're discussing a legal brief, but I wonder if you were, in anyway, commenting on contemporary literature or art.

If you wanted to show the failures of the criminal justice system, you write a pretty compelling nonfiction book about it. Or you could do what I did. I think what Toomberg is referring to there is the decision to do it the way I did.

There are some of us who still believe that art is the most powerful way to say something.

Kierkegaard has a passage in which he says, "an illusion can never be destroyed directly, and only by indirect means can it be radically removed." I think that's right.

A Naked Singularity is getting comparisons to David Foster Wallace, Thomas Pynchon, and William Gaddis. Was this a literary tradition you gravitated toward as a reader?

At times, absolutely. I admire those writers. It would be silly not to recognize that A Naked Singularity is a lot more like the works of those writers than it is a conventional realist novel.

Pretty early on in the book, I throw out quick references to Gaddis and Pynchon to say, I hope that this is not derivative of them, but this is the tradition we're in. What I drew from those writers more than anything was the freedom they felt. I'm not trying to replicate their exact methods, but I'm certainly trying to replicate that freedom when I write.

The book is largely driven by dialogue. I'm wondering if you set out to write such a book or if it just happened.

[Laughs] I don't know the answer to that. I'll bet you it was nothing more calculated than, "Hey, I'm good at dialogue, let me just do what I'm good at, this is really hard." If you happen to be good at something you're probably just going to keep doing it, because it's 700 pages and years out of your life and you just want to have fun.