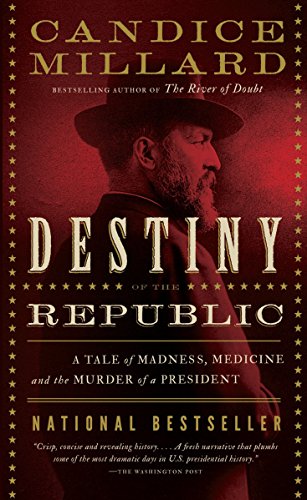 Destiny of the Republic: A Tale of Madness, Medicine and the Murder of a President
Candice Millard
Anchor Books, 2023
432 pp., 18.00

Destiny of the Republic

Historians devote themselves to a hopeless project. They are in the business of memory reclamation, dredging up long-forgotten events, places, and people buried deep within the muddy waters of the human past. The "dredging up" part has gone exceedingly well; all things considered, I would even call it a rousing success. The problem lies with the "memory reclamation" part. Although all of us go about with the noblest of intentions—"Never Forget!"—the human species shows almost no sign of being able to sustain an ongoing memory of its shared past. Memories are no sooner "reclaimed" than they slip from our trembling fingers, sinking back into the murky ooze of cultural oblivion.

As tempting as it is to blame our Blackberries and Google for what Nicholas Carr has called "the shallows" of contemporary memory, this is not a new problem. I like to imagine that the ancient writer of Ecclesiastes was pleading with future historians to change their college majors (subtext: "It really wouldn't hurt to take an accounting class"), or was at least offering them a little straight talk, when he wrote, "There is no remembrance of men of old, and even those who are yet to come will not be remembered by those who follow" (Ecc. 1:11). Like everything else "under the sun," he seemed to know that this project was doomed to failure.

But, as with so many lost causes, the task of historical study remains worthy of our support. And we can all be thankful that no one succeeded in steering Candice Millard into a career as a CPA. Her riveting history of James A. Garfield's brief presidency is not only a model of narrative nonfiction writing, it offers only the latest example of history's power to resuscitate utterly forgotten people and events that, in their day, transfixed the attention of the nation and the world in ways that surely made it seem unthinkable that they could ever be forgotten. Aside from diehard fans of the 1972 album Johnny Cash's America, in which Cash offers his memorable rendition of "Mr. Garfield," who today remembers James Garfield, his assassin Charles Guiteau, or the circumstances surrounding the desperate but tragic attempt to save the president's life? (And how long will Millard's book enable us to keep these resurrected memories on our consciousness?)

Perhaps the greatest service rendered in this book is its success in reanimating the buoyant personality and thoughtful demeanor of a man who seemed bound to become one of America's finest presidents. In the author's skilled hands, our twentieth president—otherwise confined to granite and sepia—becomes a full-orbed human person with subtle emotions, a quiet but strong presence, a passionate devotion to his family, and an unselfish heart for service. And what Millard does for Garfield, she succeeds in doing for his times. In contrast to an era whose political history we usually associate with drab figures—and even drabber history written about them—Millard's Gilded Age is surprisingly vibrant, genuinely exciting, and marked throughout by deep emotional resonance.

Garfield's heartbreaking story is as prototypically American as it is thrilling to read. The Ohio man was born into crushing poverty but rose to achieve renown as a first-rate literary scholar, a college president (of today's Hiram College), a Union general in the Civil War, a long-serving U.S. representative, and, not least, a loving husband and father of seven (five of whom survived childhood). He never sought the presidency, but in the bitterly contested 1880 Republican Convention, he accepted the nomination as a compromise candidate, his open reluctance only deepening the tragedy that awaited him.

Millard re-creates the labyrinthine world of Gilded Age politics, navigating readers through the issues that divided the Republican Party into fiercely opposing wings: The Stalwarts (those who defended a vast and corrupt system of patronage) and the Half-breeds (moderates who pushed for civil service reform). She artfully places Garfield's reform-minded presidency within the context of Stalwart party boss Roscoe Conkling's cunning machinations. This setting is especially poignant to Garfield's shooting because his assassin was disgruntled by his failure to receive an appointment in the new presidential administration through the old spoils system.

The vagrant Guiteau was not only discontented by his failure to get a government post; he was certifiably insane. Millard scrupulously reconstructs Guiteau's delusional plot to assassinate the president, a plan he believed would lead to fame, fortune, and a high-ranking position in the Chester Arthur Administration. But the lead slug that Guiteau launched into Garfield's back on July 2, 1881 was not the final cause of the president's death two months later, nor is it the source of the book's greatest drama.

Good written history manages to accomplish two incommensurable tasks at once: it renders the strange, familiar and the familiar, strange. Millard ushers us into a world where it makes perfect sense for the President of the United States to stroll about town entirely unaccompanied; where the White House is a rat-infested dump, barely suited for human habitation; where hospitals are the last place you'd want to find yourself if sick or injured; and a world in which most American doctors remain stubbornly steadfast in their refusal to accept the germ-theory of disease, even though such views—and medical treatments—had become commonplace throughout Europe.

Millard relates the shocking story that became widely known within a few years following Garfield's death: the bullet lodged in Garfield's back was not life-threatening. Had a common tramp been shot in the same way, he almost certainly would have survived! The president's death was the result of sepsis-induced infection that riddled his body, introduced by the continual probing of his wound by multiple doctors using unsanitized fingers and crude, soiled instruments. Garfield died because of rather than despite receiving the "best medical attention available" to him in the United States.

The utterly self-defeating race to save the president's life transfixed the nation, and enlisted some of its most resourceful minds. A storyline Millard threads throughout the book is that of Alexander Graham Bell, the man who had achieved worldwide fame for his invention of the telephone only a few years prior to Garfield's presidency. Upon hearing news of the shooting, Bell immediately became obsessed with developing an instrument—a crude machine he called an "induction balance"—that he hoped would detect the exact location of the bullet in the president's back (it was tried on the president twice with no success). Even though the bullet and its extraction would have done nothing to save Garfield's life, Bell's story provides a window into the makeshift technologies of the day and the limits of medical knowledge little more than a century ago. (Millard reports that Bell's invention was eventually improved and would be used to save lives in the years prior to the development of X-ray technology).

Reading Millard's rousing account of the absurd act of lunacy that threatened the Garfield's life—and the ham-fisted comedy of errors that assured his death—is a useful exercise in historical thinking. While she succeeds in preserving some of the past's strangeness, she also reminds us that certain features of our shared history persist from age to age. Here we observe that there is nothing especially new about the political corruption or fractious partisan politics of our own era; that senseless acts of violence are an abiding part of the human experience; that although American confidence in technological mastery can yield spectacular progress, it too often rests upon an obstinate, reckless hubris; and that great national tragedies have a way of uniting even the most divided American spirit (in this case, for the first time since the Civil War).

While we can be sure that whatever vivid memories of this consequential moment in our history that Millard has restored to us won't likely remain in our consciousness for long, this fine book is a tribute to an enduring human enterprise. We remain hopelessly devoted to the task of reconstructing our past as a service to our feeble collective memory—and, as long we do, there is at least some small chance that we will not become entirely imprisoned by the demands and the folly of our present age.

Perhaps it is true that "... great national tragedies have a way of uniting even the most divided American spirit ..." After all, that did happen after 9/11 ... for about a week or two!